Plan Commission Shows Backbone - Will it Stick or Will it Farwell?

In something of a surprise, the Chicago Plan Commission had a rare show of independence last Thursday when it rejected a Chicago Department of Planning Development-backed proposal, that would have seen the 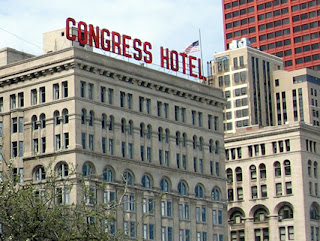 embattled Congress Hotel add five stories above the Harrison Street side of the structure, and one story above the part along the landmarked Michigan Avenue street wall.

The action was not unlike the one last January when the Landmarks Commission rejected another Planning Department initiative to demolish the landmarked Farwell Building on North Michigan Avenue. Opponents won, not because they were in the majority, but because the proposal fell short of a majority. With commission member John Baird absent, the abstention of Ernst C. Wong was enough for the 4 to 3 vote in favor of demolition to fail, because it didn't get a majority vote of those in attendance. That should have been the end of it, but of course, this being Chicago, while preservationists get just shot one at making a building a landmark, developers get to keep re-voting as many times as necessary to get what they want.
The screws were applied to Commission members, and at a special meeting called the following March to reverse the original vote, Edward Torrez was the only commissioner not to fold like a piece of cheap cardboard.

Special meetings of the Commission are rarely, if ever, called to provide emergency protection to a building under immediate threat. They're more commonly a sign that 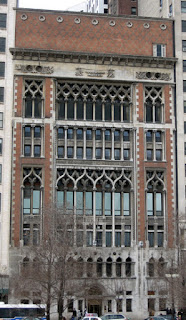 the Commission has been summoned to fulfill its primary, if unwritten, role: to provide cover for a developer wanting to mutilate or demolish another Chicago landmark. There was fear that a hastily scheduled special January 31st session would involve the Commission rubber-stamping the gutting of the landmarked but financially troubled buildings of the Chicago Athletic Club, also a part of the Michigan Avenue street wall, possibly leaving it, a la Farwell, as little more than a facade. That meeting has now been cancelled, and we'll have to await the Commission's February 7th monthly session (the regular January meeting was also cancelled) to see what they have up their sleeve.

Back at the Plan Commission, the alteration of the Congress Hotel, for which Mayor Richard M. 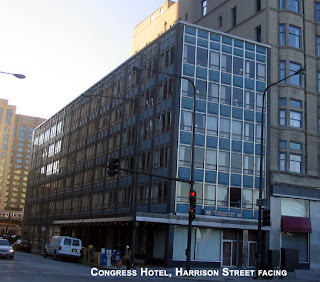 Daley has given highly vocal support, had four votes in its favor, and only one against, but because four other members in attendance abstained from voting (now there's a story for an investigative reporter to sink his or her teeth in), the measure failed to obtain the necessary majority.

Normally, you'd think this would be Farwell2 in the making - it shouldn't be too hard to muscle one or two of the abstainers to switch. The situation at the Congress may, however, prove a bit more complicated. There's the bitter, nearly five year-long labor dispute in which the hotel's management - alone among the city's major hotels - has refused to come to terms with striking workers, and the strong opposition of the 2nd ward's recently elected alderman, Robert Fioretti. Fioretti's concerns over the condition of the property were cited by the critical "no" vote, Nancy Pacher, the powerful COO of mega-manager U.S. Equities Realty.

It's doubtful this will be the end of it. Now the Commissioners will be in the unenviable position of having to decide who they're least afraid of offending: the Mayor, the alderman, or organized labor.

According to architectural historian Joseph M. Siry, the Congress debuted on May 1, 1893, opening day for the World's Columbian Exposition, whose hordes of visitors the hotel would help to house. It opened as the Auditorium Annex, to catch the overflow from the wildly successful Auditorium Hotel just across 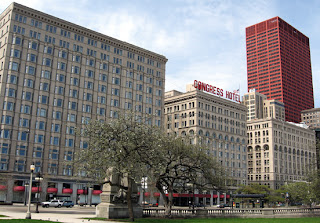 Congress Parkway. The original design by architect Clinton J. Warren was modified by Auditorium Building's architects Adler and Sullivan, brought in as consultants to make the new hotel better mesh visually with its 1886 neighbor. It's the same height as the Auditorium's main block, and is faced in the same Bedford limestone. In 1902, the original Congress Hotel, today the Congress's southern block, was constructed to a design of Holabird and Roche.

The Auditorium Hotel went belly-up in the 1920's; the Congress lives to this day as the Congress Plaza, a hotel of faded grandeur. Despite its prime location near Millennium Park, it offers, according to David Roeder and Fran Spielman of the Chicago Sun-Times, "the lowest rental rates downtown, sometimes as little as $79 a night." Pickets at the entrance, no extra charge.