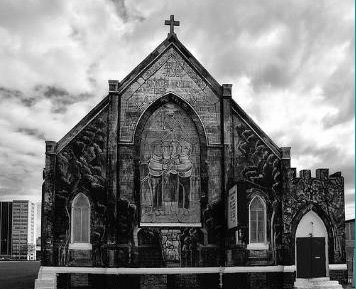 Former Chicago Sun-Time's architectural critic Lee Bey has a new website, Lee Bey: the urban observer, that both lets you keep track of Bey's activities, and offers up a "Chicago Building of the Day", usually with one of Bey's own photographs. On Monday, May 22nd, that building was Chicago classic Marina City, but what makes the site potentially more interesting is when the building is a lesser-known, classic, such as May 19th's Stranger's Home M.B.C. church,

a survivor that was there before the creation of the now infamous Cabrini-Green public housing project on Chicago's near north side, and now survives it as the area is becoming increasingly gentrified. Bey served as Deputy Mayor to Richard M. Daley, and is currently director of media and governmental affairs for Skidmore, Owings and Merrill. Lets hope the urban observer puts Bey's distinctive, refreshing take on Chicago architecture back into more frequent circulation.
(Click on time for permalink) 6:23 PM