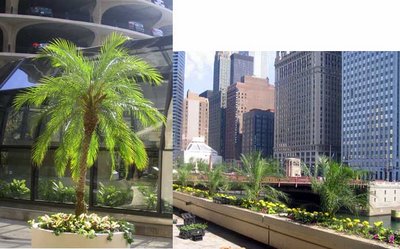 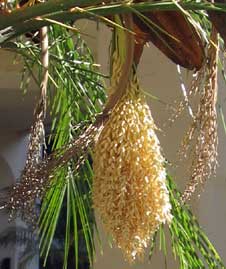 Palms Trees are usually not the first thing you associate with Chicago. Bertrand Goldberg's iconic Marina City complex somehow got along without them for for the first several decades of its existence, but for the past few years, one of the sure signs of summer has been the planting of the palm trees all along its raised plaza. Fittingly, it was a May week of record heat that saw the ficus's of spring being pulled from the planters and the toy-pony-sized palms put in their place.

It's a little goofy, to be sure, but why not? Maybe it's a homage to the Corbusian, sunny Mediterranean influences found in Goldberg's works. (The curving forms of the theater that's now the House of Blues channels Corbu's Notre Dame du Haut at Ronchamp, if only Ronchamp had a souvenir shop in its side chapel.) Having the palm trees back is a quirky treat. Who knows? If we're lucky, maybe they'll even break out into seed pods again this year.

I live at Marina City and always look forward to the return of the Palms. It was great to see them back this week! Betrand

Ronchamp yes, and I also always saw some Ingalls ice rink at Yale by Eero Saarinen.