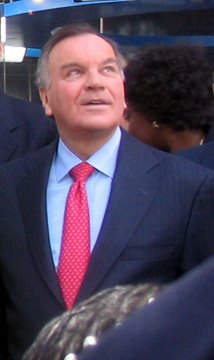 Chicago's Richard M. Daley is among three mayors cosponsoring Resolution 50, Adopting the "2030 Challenge" for City Buildings (in pdf format) to be presented for approval at the U.S. Conference of Mayors conclave in Las Vegas June 2 though 6. The resolution mandates that all new public buildings will be "carbon neutral" -not using any fossil fuels - by the year 2030. It lays out a timeline for this goal to be met, with buildings to be 60% fossil fuel free by 2010, (less than four years away), 70% free in 2015, 80% in 2020 and 90% in 2020. The resolution cites a recent study by Lawrence Berkeley National Laboratory that pegs the benefits of green design at $50.00 to $70.00 per square foot, more than 10 times of cost of making a structure green, with initial construction costs representing only 20-30% of a building's entire cost over a 30 to 40 year life cycle. For renovated buildings, the Resolution sets a goal that doubles the fossil fuel reduction standards of the U.S. Department of Energy.

According to the Architecture 2030 newsletter from green architect Edward Mazria, "Buildings account for an estimated 48% of all green house emissions. " The National Government Advocacy Team of the American Institute of Architects is actively lobbying for the resolution's passage. Mazria's newsletters points to pr/lobbying material such as suggested talking points on the resolution, a template for a letter to a mayor urging support, as well a draft of a op-ed submission. (All in Microsoft Word format) Since the U.S. Conference of Mayors includes cities with over 30,000 in population, in Illinois that would mean not only Chicago and Rockford, but suburbs from Schaumburg to Cicero, and dozens in between.