Two Bits - Calatrava in Chicago and now RMJM in Moscow? 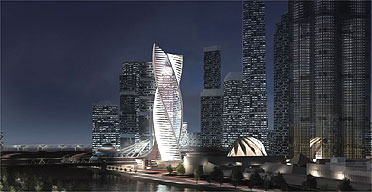 Hot on the heels of the drill-bit design of Santiago Calatrava's proposed Fordham Spire in Chicago, we receive word via ArchNewsNow and the Guardian newspaper of a proposal just approved for an another "drill bit" structure in Moscow, the 46 story City Palace, which RMJM architects prefers to call, according to the Guardian, "two ribbons wrapping around each other". It will stand adjacent to Norman Foster's proposed Moscow City Tower, which at 118 stories, would be the tallest building in Europe, which in this rendering posted on Emporis, looks like a far more elegant version of the mercifully deep-sixed proposal for a 2,000 foot Beitler Tower in Streeterville. Edinburgh's RMJM also built the late architect Enric Miralles new Scottish Parliament, which wound up costing 10 times its original estimate.
(Click on time for permalink) 1:50 PM