Tag Day for an Endangered Kenilworth? 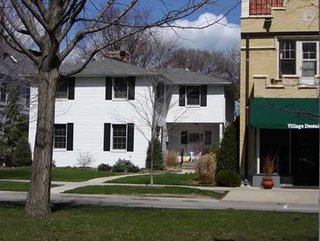 What do Doo Wop Motels and the Chicago suburb of Kenilworth have in common? They've both just been named by the National Trust for Historic Preservation to its 2006 list of America's 11 Most Endangered Historic Places. Kenilworth may often win out as the country's wealthiest suburb, as in a 2004 survey by OnBoard LLC, but it's suffering from a "really big house gap", ranking a pathetic 88th in Forbes Magazine's 2006 list of America's most expensive zip codes, with the media home sale price an anemic $1,075,000.

Clearly, Kenilworth has a lot of catching up to do, and, according to the Trust, it's "under siege" by MacMansion mania, with nearly two dozen teardowns in just the last three years. Long-time resident George Maher tops the list of historic Chicago architects who have built in Kenilworth, accounting for over 40 of the suburb's 830 homes. Daniel Burnham also did homes there and Jens Jensen laid out a number of its landscapes. The Trust website includes a number of resources "for Protecting Historic Neighborhoods from Teardowns".

While three photographs on the website document how out of scale some of the new projects are with the rest of the community, the Trust offers little in the way of 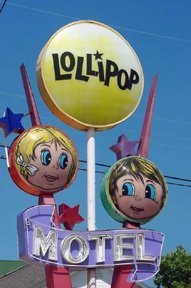 specifics to prove that important architecture has been lost. The demolished building in the photo shown above doesn't look much different than a higher end house you'd find anywhere else, nor does the commercial building next to it. Every effort should be made to save structures of true architectural distinction, but if the residents of the richest suburb in America want to slum up their own back yard with big bad outcroppings of ostentation, it's pretty much a self-inflicted wound - who are we to say no? Me, I'm a lot more concerned about the Doo Wop Motels.

Maybe next year the motels on North Lincoln Avenue will make the list.

Kenilworth isn't the richest suburb; far from it. And I can't figure out the picture--where is it?

Well I'm sure there are suburbs with some homes that are more expensive, but supposedly Kenilworth's zipcode is the most expensive in the Chicago area.

Thank you so much for bringing these old motels to my attention. Being from the Pacific Northwest, I had no idea that New Jersey was such a hotbed of kitschy vernacular and novelty architecture. Apparently it's time for a roadtrip!

Great post. It's interesting that www.YoChicago.com also chose the same two subjects -- Kenilworth mansions and Doo Wop Motels -- from the list of nearly a dozen, for a post it published several hours before yours. Must be a coincidence, or I'm sure you would have given credit.

In response to anonymous, I discovered YoChicago, an entertaining and informative adjunct to a real estate marketing site, just this week, long after I wrote the Kenilworth post. I discovered it while Googling for more information on the house architect Dan Wheeler is designing on Orchard Street, when I came across Phil Berger's 5/4 post on Orchard Street McMansions.

The reason both of us combined Doo Wop Motels with the Kenilworth discussion is that they offered the most interesting contrast on the National Trust's list. Further proof that great minds think alike.

The Kenilworth pictue at the top of the article is on Park Ave. just west of Green Bay Rd. It's been completely renovated so it does not look like that anymore