Becker Goes Off in a Huff(ington) on Uncle Dan

As you may already have heard, the popular Huffington Post news-site has begun an experiment of adding local versions, with Chicago being chosen as the inaugural city.

HuffPost Chicago's debut edition includes posts from such uber-celebrities as John Cusack, Ina Pinkney and Christie Hefner, a "don't believe all those stories about how bad Cook County Jail is" apologia from Sheriff Tom Dart, plus contributions from local 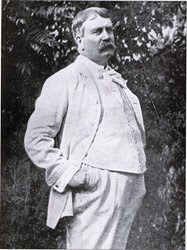 bloggers such as Chicago Carless's Mike Doyle and the eternal wanderer Edward Lifson. There's a lecture the great Leon Depres gave at the Chicago History Museum on The Dark History Of The Treaty Of Chicago (spoiler alert: the Pottawatomie, Chippewa, Ottawa, et al got screwed.)

On a lower shelf from all these illustrious contributors is my own modest contribution, A Civic Seance: Can the Spirit of Daniel Burnham Reshape Chicago?, which expands on a posting here earlier this week on the upcoming centennial of Burnham's 1909 Plan of Chicago and the Chicago Architectural Club's Union Station 2020 competition.

I heard somewhere that Tribune media critic Steve Johnson is already trashing the site, but if the initial mix of posts can be sustained, I see Huffpost Chicago becoming an eclectic and informative web presence. I'm glad to be on board.