Do You Remember the '68 Democratic Convention? The CHM is looking for you. 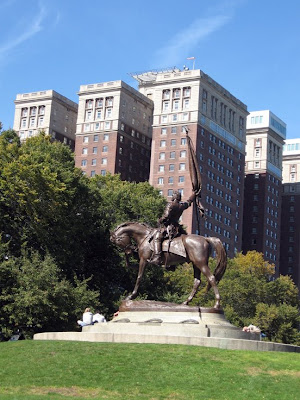 And, no, I don't mean from watching it on TV. For those you who are not so good on history, the 68 Convention was one of the most dramatic events Chicago has ever seen, sparking violent confrontations between protestors and police that began when the demonstrators outside the Conrad Hilton on South Michigan became enraged after discovering that the John Logan statue was not actually in Logan Square.

The Chicago History Museum will commemorate the 40th anniversary of the 1968 Democratic National Convention (DNC) by recording interviews with individuals who witnessed and participated in the DNC and the demonstrations organized for the event. The museum seeks bystanders, policemen, demonstrators, delegates, photographers, and students to share their memories and experiences about this explosive event in American political history. Beginning Tuesday, August 26, and ending Friday, August 29, the museum invites individuals for interviews between 10:00 a.m. and 4:00 p.m. The Museum’s curatorial staff will conduct the interviews on the fortieth anniversary of the historic convention. I was there: The 1968 Democratic National Convention is a project under the auspices of the Studs Terkel Center for Oral History. Interested individuals should call 312.799.2004 for appointments. Individuals that arrive without an appointment will be taken at a first come, first served basis.

I would go, but unfortunately, I was young and afraid to leave the house. Ah, the vicarious life.
(Click on time for permalink) 9:08 PM

The 2009 IML Leather Market was held in the basement spaces. They were stunningly immense, and the cool fresh outdoor air made the spaces comfortable. Some of the basement spaces appeared to have more than 20 foot ceilings. It was wonderful to be down there.