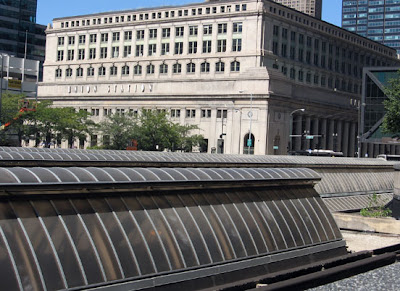 For much of the past four decades, Chicago's 1925 Union Station and its environs has 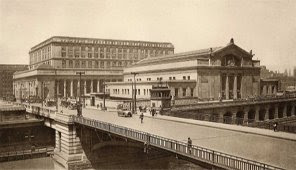 seemed to have been a heat sink for bad ideas. In 1969, in one of those acts of civic vandalism that gives one shivers, the station's soaring concourse was demolished for construction of one of ugliest skyscrapers of the era, 222 South Riverside, which, until a welcome 1992 renovation by Lucien Lagrange, channeled passengers through bare concrete passageways like cattle being pushed down the chutes of an abattoir.

In 2003, the Chicago Central Area Plan endorsed an idea for a new subway under Clinton Street that would be a corrupt politician's wet dream and commuters' nightmare. Passengers would be buried up to four levels below the street in a project whose ultimate cost would likely make the $300 million squandered in the mothballed "superstation" under Block 37 look like penny candy. Most recently, it's been proposed to divert $58 million from the city's TIF slush funds to subsidize an ill-conceived project to add 18 floors to the existing station with over a half a million square feet space of office space in narrow floorplates.

Oh, and did we mention that the first idea to commemorate the 100th anniversary of Daniel Burnham's 1909 Plan of Chicago was a competition for the design of a statue? 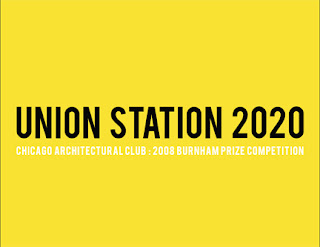 the Chicago Architectural Club has taken a different tack and made the revitalization of Union Station the subject of their 2008 Burnham Competition. Union Station 2020 is part of Burnham 2.0: A Patchwork Plan for the High-Speed Rail City, created in partnership with the Chicago Humanities Festival and Chicago History Museum, where the work of the entrants to the competition will be exhibited beginning November 8th.

The competition comes at a propitious time when, in the face of airlines falling over themselves in an apparent race to slash their operating costs by driving away 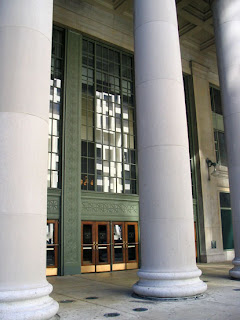 . . . innovative solutions for the transformation of Union Station into a center of high speed rail traffic and related programs. It is not simply a question of designing an efficient and functional transit hub. How can this intermodal node become more than a mere knot of infrastructure? What role can this project play in the reconfiguration of Chicago’s West Loop and of the city and region? How can an existing landmark building be transformed to accommodate and generate a new combination of activities while welcoming an unprecedented level of rail traffic? What can Union Station be in the era of High-Speed Rail? 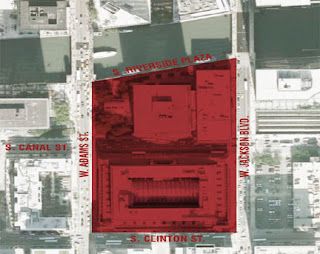 somewhere else and turning more of Union Station's tracks over to Amtrak. You even get to propose tearing down 222 South Riverside without having to replace the office space. (Ah, poetic justice.)

The competition jury will include Stan Allen, Dean of the Princeton University of School of Architecture, Chicago architects Doug Garofalo and Zoka Zola, Geoff Manaugh, editor of Dwell Magazine, and the ubiquitous Bruce Mau. A blog has been set up through which you can submit questions through September 15th. Online submission of entries opens October 10 and closes October 15th. Winners, including a $10,000 first prize, $3,000 second, $1,500 third and up to three honorable mentions, will be announced November 8th.

You can download the competition brief, as well as drawings, photos and other information, here.

I was very excited to downlod the brief only to be disapointed to read the "rules".

The CAC makes no real mention of what to do with the 20 or so suburban lines coming into the terminal. Just wipe them away?

Its confusing to say the least - are they now one level below the High Speed Rails?

Is Union Station really the best place for this station anyways? What about the acres and acres of empty land east of the river which could be utilise the St. Charles and B&O rights of ways.

Agreed, that makes no sense. There's two problems here - one is train service in this country - the other is the current design of Union Station (though one begot the other.)

But "wiping" away the majority of actual passenger train traffic, in favor of imaginary future train service ... seems a perfect way to ensure these will remain concepts, only.

I guess I'm confused as well. You start off with how wasteful the B37 project and Clinton Street subway would be, but then introduce a competition where they magically relocate all the suburban lines? Isn't that going to cost quite a bit more than either of the two projects mentioned above?

Amtrak's capital budget is woefully underfunded, and yet some massive influx of routes and ridership will somehow materialize which will necessitate shunting local riders elsewhere? As one of those incovenient suburban commuters, I say no thanks. Yes, the main building of Union Station is underutilized (the concourses are loaded with, yes, all those incovenient suburbanites) but that's mainly due to the building being west of the concourses, while almost all of the commuter traffic moves east into the Loop.

The brief is pretty clear that the high-speed train and transportation program is an excuse, in some ways, to think about the city. This is reinforced by the fact that the program includes more than transportation hub. If you have questions about the program, you can simply ask here, they have been very diligent about answering: