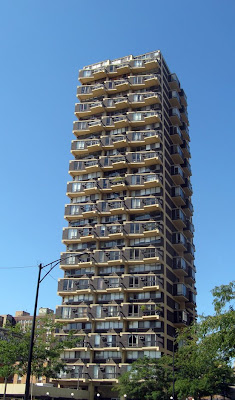 You may call it a delight, or you may call it an eyesore, but one of the most distinctive buildings along Sheridan Road - or in Chicago, for that matter - is the Granville Tower, at 6166 North, 29 stories tall and completed in 1965 to a design by Seymour S. Goldstein, Ltd. 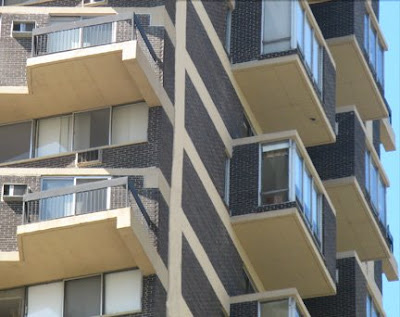 Its weirdly contorted facades, which bring to mind Oscar Wilde's description of the Water Tower as a "monstrosity with pepper boxes stuck all over it", actually have a logical relation to the plan, which was made up entirely of duplex units with bedrooms on the upper levels.

Seen from a distance on a day when bright blue skies put the structure into high contrast, all those zits broken out across its face destabilize your ability to see the tower as a stable, solid object; it almost seems to be folding and crumbling right before you eyes.

Viewed at closer range, the box-like extensions and diagonal balconies give the building a sort of surreal, archaic flair, suggesting everything from an architect's worst hangover, a wall of cliff dwellings, or, perhaps, the world's tallest Jenga game. 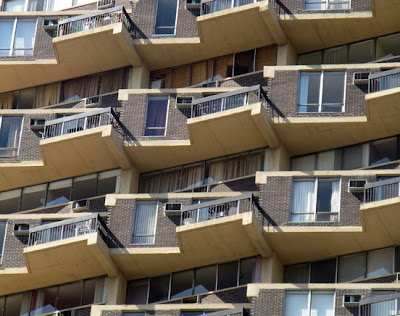 I have to say, I absolutely love this building (of course, I went to UIC, so I also love a lot of the brutalist stuff).

Thanks for the info that it is duplexes, it makes more sense to know that.

I think of the building as having a lot of zig-zags, and even see it in the context of art deco.

Thanks for the pics, I tell everyone that is in my car as we go by that I love this structure, and I always get a lot of questioning glances.

(I live on the south side, and work in the south loop, but I have to get a fix of Metropolis coffee sometimes, which is right around the corner on Granville)

I've loved this building for years and years, however, it is much reviled by the residents of Edgewater.