Perkins+ Will's Design Principal Ralph Johnson found his work being cited for excellence not once, but twice on a single day this past week.

First, World Architecture Community, a new website with the ambition of being "an independent forum

and extensive database" and "the 'Home Page' of architects from ALL countries of the world" announced that Johnson's 2001 master plan for Universidade Agostinho Neto in Luanda, Angola was one of an "extra 30 projects" receiving the "admiration" of WA's invited array of honorary members - an international roster of such luminaries as Kenneth Frampton, Ken Yeang, Massimiliano Fuksas and Martin Filler, to skim just two letter's worth of names - voting for the "1st Cycle" winners of the 20+10+X World Architecture Community Awards. 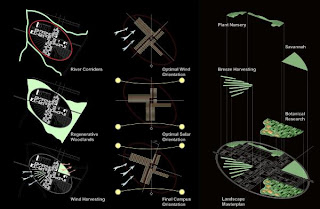 Johnson's plan for the 5,000 acre campus stresses sustainable design, with a mixture of low and high-rise buildings to create pressure differentials that will draw the natural cooling of the wind throughout the campus, and trees planted to in a way the captures breezes from the savannah.

The same day, Business Week and the Architectural Record announced Johnson's One Haworth Center in Holland, Michigan as one of six winners of the 11th annual "Good Design is Good Business" international competition, honoring "innovative architecture that demonstrates exemplary design, while helping clients achieve their business goals." The project involved 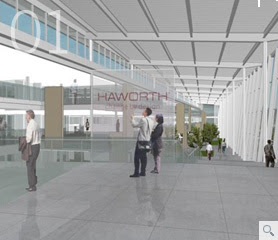 recycling and retrofitting a 1980, 1000-foot long, bunker-like building fused to the front of the Haworth factory.

In his May review of the building, co-designed with Eva Maddox Branded Environments, the Trib's Blair Kamin seemed to be seeing the same relationship between superior design and good business: "Within the canted glass walls of the building’s atrium lies a seamlessly integrated world that is part office, part showroom, part laboratory and part museum. All the parts come together for one principal purpose: To seduce clients to buy from Haworth 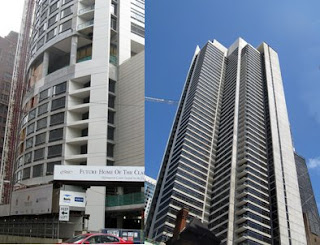 To make it a true trifecta, Johnson's The Clare at Water Tower, an elegant 52-story Janus with a sweeping curving facade and sawtooth backside, is nearing completion at Rush and Pearson, leaving me almost looking forward to old age. (The Clare is a "world-class, resort-style retirement living" building, run by the Franciscans.)

Now if only someone could talk to him about the Peshtigo . . .