Rosenwald Apartments on the Block - Again 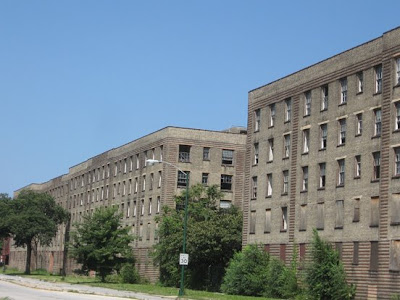 Crain's Chicago Business had an item last week that the 1929 Rosenwald Apartments, at 47th and Michigan in Bronzeville, are again seeking a buyer.

The 447 unit complex has been vacant and boarded up for years. It was originally created by Sears Roebuck & Company executive Julius Rosenwald as the Michigan Boulevard Garden Apartments, to provide affordable housing for working class minority families at a time when such housing was in acutely short supply.

According to an excellent history of the building on the Preservation Chicago website, Rosenwald hired his nephew Ernest Grunsfeld, Jr., an architect who would later win an AIA Gold Medal for Adler Planetarium, for the design. The Rosenwald Apartments were actually a full-block series of interconnected buildings with landscaped courtyards at two of the eight separate entrances, and a large central green space with the structures along its perimeter.

The Rosenwald remained well managed for decades. A 1953 story in Jet Magazine carried manager Robert R. Taylor's announcement that the complex would begin accepting white tenants, "mainly school teachers and social works [who] had been living in the famed upper class housing project ' off and on for some time'". In 1967, Jet reported the complex was to undergo a $2,000,000 modernization and be converted to condo's ranging in price from $6,265, for a one bedroom, to $9,215, for a three bedroom unit. 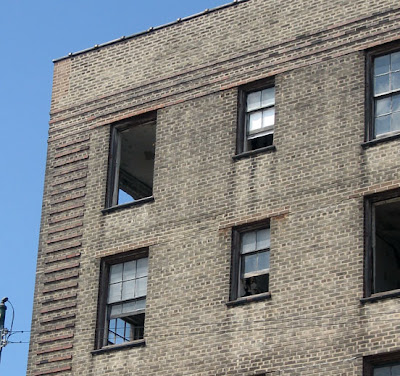 Another rehabilitation in the 1980's failed to arrest the Rosenwald's decline. In 2003, the National Trust placed it on its "Eleven Most Endangered Historic Places" list. Landmarks Illinois followed in 2005, placing it on its "Chicagoland Watch List" for that year. In 2007, it made the "Chicago 7", Preservation Chicago's annual list of most threatened sites.

The complex was left to rot throughout the long tenure of controversial 3rd ward alderman Dorothy Tillman, and for years it has been vacant, the storefronts empty. Tillman was finally defeated by Pat Dowell, who reported in a newsletter that the Rosenwald has finally been "boarded-up and secured." Powell wrote that she had met with the owners, the same owners who are now looking to unload the building.

No less than at the time it was built, in 1929, Chicago suffers from an shortage of affordable housing, but for decades the Rosenwald, one of the proudest examples of the campaign to provide decent housing for all city residents, has been left, in essence, abandoned. You can see a Flikr set of photos of the Rosenwald's current state here.

This is how Chicago works. A billion dollars for a new "Olympic Village" to house 1,700 athletes for a couple of weeks. For a building that stands as one of proudest beacons of hope in Chicago history, with 400 units of affordable housing just waiting for a rehab, not a dime. 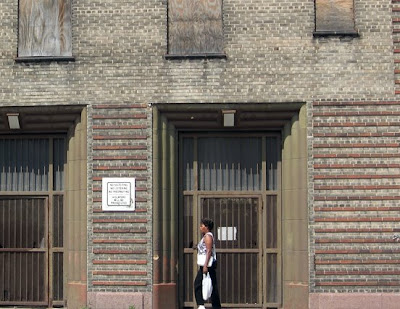 wouldn't it be great to fund this by usint it as Olympic housing and then have it turn into low income housing afterwards.

I just hate to see it just sitting there. I used to live there and it was a place where your African-American doctors, lawyers, teachers and middle class families lived.

I was a resident of the "Rosenwald" from July 1974 until June of 1985. I was entering my senior year of high school when my parents purchased a home and moved out of the development. So many successful people has come and gone during the time of my stay. It was like a courtyard filled with nothing but family. As new owners came into existence with the property, things began to go downhill. My experience living there was wonderful. My maternal and paternal grandparents resided at the property as well as the generation of my neighbors. If the "Rosenwald" were ever to be restored, I would love to continue to be a part of such a historical residence and relocate back to Chicago on 47th st.

I am only 18 yrs old,and that is where i grew up before me and my family was forced to move out.Every body who lived in there all where family and shared nothing but happy moments. The Rosenwalds is where it all begin From me back to my Great great grandma and grand father.I think if the Rosenwalds were ever to be reopened i would love to move back in my growth place but i know it wouldnt be the same unless all the residents who use to live there would move back in and we be a big old Rosenwald family again

So what exactly was the cause for its demise?

We lived on 47th and Wabash. It was a safe place to live and grow. I remember playing in the playground Was not aware of it its rich history.

HI there - I'm a fan of all things related to Chicago architecture. We have a house down here in Savannah designed by Grunsfeld -- trying to get some more info on him. If you have anything you would be able to pass along, I'd certainly apprecaite it. He designed an estate for the Adler family on Victory Drive -- some amateur iPhone photos are linked here: http://www.facebook.com/#!/media/set/?set=a.292621674094657.73473.116201551736671&type=3

Anything you can pass along would be most appreciated -- this home is bank-owned and we are looking to purchase it! Best, LdV

Man I love this place grew up here from 1986-2000 when they closed it down regardless of what was said yes there were ganges and yes there were drugs but it was a safe place to play and trust me everybody looked out for everybody, it was like everybody was family some of the best years of my life