It's still another late listing to the February calendar of architectural events, but you still have time to adjust your own calendar and post a reminder to head out to Frank Lloyd Wright's Unity Temple in Oak Park on Monday, February 16th for

a reading and book signing by acclaimed novelist T.C. Boyle for his newest novel, The Women, described by the Unity Temple Restoration Foundation as "a masterful ode to the complex and create live of Frank Lloyd Wright told through the experiences of four women who loved him." Four women who were, successively, abandoned by Wright, murdered (not by Wright), addicted to morphine, and, only after he had lived 92 years, actually survived him. But what marriage doesn't have its ups and downs?

Getting a handle on the slippery Frank Lloyd Wright can be a bit of a minefield. Just ask playwright Richard Nelson. And, of course, you can never please everyone. Case in the point is a post I put up last week regarding the New York Times rather schizoid reaction to Boyle's latest work. On a recent Monday, reviewer Michiko Kakutani slammed it as "dreary . . . tedious, predictable melodrama." By the following Sunday, however, on the cover, no less, of the weekend book review section, the book had morphed, in the eyes of Joanna Scott, into something "powerful . . . mesmerizing . . . Boyle at his best."

Being, as I've frequently mentioned, basically illiterate, I've yet to tackle Boyle's opus, but he's written highly praised takes on John Harvey Kellogg (The Road to Wellville) and Alfred Kinsey (The Inner Circle). And what better way to spend an evening than in one of the great buildings of the 20th century? 7:00 to 9:00 p.m., Unity Temple, 875 Lake Street in Oak Park, a talk and reading by Boyle, followed by a book signing and refreshments in Unity House. More info on-line, or call 708/383.8873. 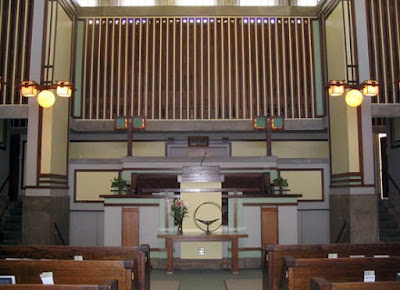 Hmm. If you do attend this event, get an interior designer to dress you. Better to blend into the background than stand out as mainstream in the uber chic crowd.

I hope the organizers are aware that such an event will surely attract the wives and ex-wives of architects.

Like bluebeard's wives, they must be kept apart or they will share bitter stories that will spoil TC's party. Solidarity can be a dangerous thing.

I suggest the organizers arrange some other merchandise - not just the book but other items, such as bespoke 'architectural' jewellery or highly textured textiles - to ensure the wives compete rather than consort.

Only if they can read! (wives/exwives)So trender benders only. I don't have a pair of red shoes.