Lucien Lagrange and Bruce Graham - the not so odd couple, at an appreciation of SOM's master architect at CAF 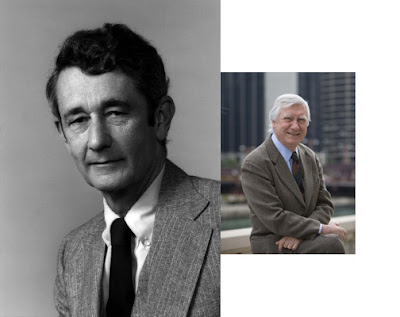 When you think of Bruce Graham, the master architect who died this past March at 84, Lucien Lagrange is probably not the architect whose name next comes to mind. Working with uber-engineer Fazlur Khan, Graham created some of Chicago's greatest architectural icons, including the Willis (aka Sears) Tower, the tallest building in the world at

the time of its construction, and the John Hancock Center, the romantic, tapering tower that sets Gershwin playing in my head every time I catch a glimpse of it out my window. Lucien Lagrange, despite such accomplished forays into modernism as his spiky Erie on the Park, is best known for vaguely classicist designs that have endeared him to his clients, if not the critics, and placed him among the city's most successful architects.

However, Graham and Lagrange shared a strong link, one that will explored at what promises to be an exceptional event at the Chicago Architecture Foundation next Wednesday, June 16th, Remembering Bruce Graham, where Graham's legacy will be discussed by a panel including Lagrange, author Franz Schulze, who refers to Graham as "the Burnham of his generation", and Richard F. Tomlinson of Skidmore, Owings & Merrill, the firm that was Graham's home base for nearly four decades, and where Graham quickly became Tomlinson's mentor when the younger architect joined the firm in 1972.

While the Provence-born Lagrange was studying architecture at Montreal's McGill University, he came to Chicago in 1968 seeking a summer internship, and, after not getting a position with the firm of Mies van der Rohe, wound up at SOM. In his second week there, his drafting skills got him assigned to working as a designer for Bruce Graham and Fazlur Khan, just as the Hancock Center was moving 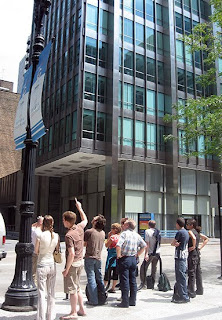 towards completion. "I really started to understand steel through their teaching." Lagrange has written. "They were incredible people with visions of buildings and structure."

Although known for structures with simple, strong and striking visual profiles, Graham was acutely aware of the kinetic aspect of architecture. "Architecture," he said, "is in the design of space, both interior and exterior. So it's much more closely related to dance than it is to painting or sculpture."

Remembering Bruce Graham takes place from 6 to 7:15 p.m, Wednesday, June 16th, in the Lecture Hall Gallery at the Chicago Architecture Foundation, 224 S. Michigan. $5.00 for non-members, $10.00 non-members, and you can still register on-line here.