The Red and the Black: Hey, Mies - Here come the Hawks!


In case you might not have heard, this past Friday, the city of Chicago celebrated the Chicago Blackhawks' ending a nearly half-century drought to win this year's Stanley Cup.

This year, the city had sought to avoid the massive crowds that overflow downtown streets after the annual Fourth of July fireworks by using budgetary concerns as an excuse for cancelling the event and breaking it up into smaller shows out in the neighborhoods. The Blackhawks' dramatic win confounded those intentions. Whether City Hall bureaucrats find it inconvenient or not, mass gatherings - of celebration or protest - on a scale that balances out that of the massive structures around them, are one of the key things that define a truly great city, as opposed to an emptied-out metropolis: the sense of sharing and ownership of the city among the citizens, themselves.

Done, not under the cover of a July night but in broad daylight, the Hawks celebration was a show of Chicago's enduring power and potential made flesh.

These two photos from our indefatigable correspondent Bob Johnson depict the extraordinary sight of seeing jammed streets along the city's riverfront running red with hundreds of thousands of Blackhawk fans, wearing their team colors, cheering as a parade of double-decker buses carrying Hawks players glided through their midst along a narrow vein of cleared payment that closed up solid with bodies as soon as the end bus carrying the Stanley Cup passed by. 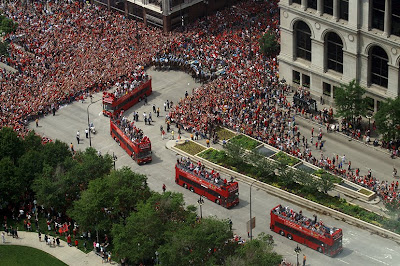 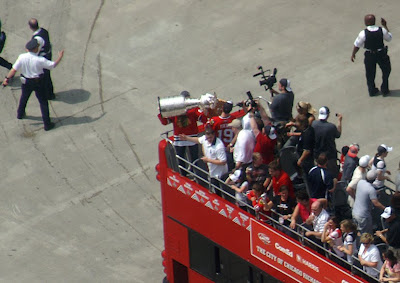 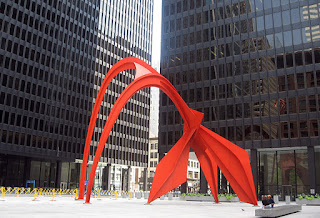 like a Model-T Ford - you could have them in any color you wanted, as long as it was black (or bronze, if you were particularly flush). Mies's dark towers impart a serene, sober dignity. At the Federal Center, there's counterpoint in Alexander Calder's flaming red Flamingo, a perfect complement. Mies's darkness makes Calder's brightness almost burn into your retina; while the color of the sculpture only deepens your apprehension of Mies's rich monochrome.
Neither Mies's Crown Hall on the IIT campus or the IBM, now known as 330 North Wabash, have any such relief. They are absolutely pure in their palette, 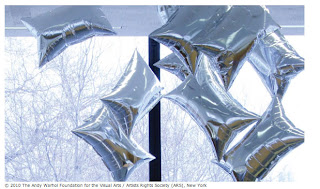 and better for it. Every so often, however, a brief event dirties them up, in the best possible sense. Back in the 1950's, it was Duke Ellington and his band stomping and shaking the windows of Crown Hall, where this summer silver pillows are floating as part of an installation of Andy Warhol's Silver Clouds that runs through August 1st.

And Friday, it was the IBM's turn, as a ten-story-high red Blackhawks banner took over the southeast corner of of Mies's black tower, to the delight - and no small bit of awe - of the parade of passersby and hordes of shutterbugs. 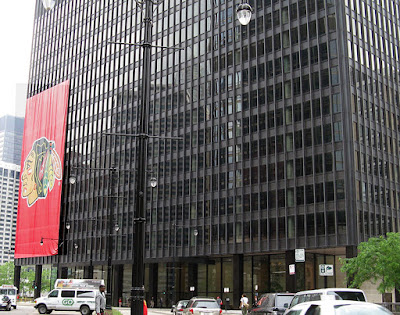 For a brief time, the street was transformed. The static structure added Venturian layers of meaning: an iconography of the region's native American history, it's repurposing into the culture of the replacing white settlers, its abstraction into a commercial symbol. And on top of that, the sudden contrast of textures: soft versus hard, chromatic verus monochrome, the static probity of enduring structure enlivened by a red burst of human enthusiasm. Street theater of a city living in the fullness of its senses. 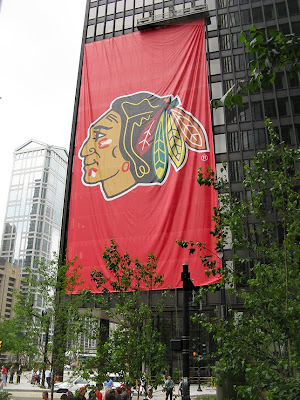 The Mayor, et al, love love love big SOBER crowds. Unfortunately the July 3rd fireworks event had evolved into a million people spending the day getting drunk in Grant Park and it was escalating yearly. We can expect that the beach crowds will be checked for liquor (which is already happening in parts of Lincoln Park), which will discourage the all-day drunks from showing up.

Always good to hear from the Mayor's press office, however informally.

The mayor must like sober crowds - that's why he's ramping up liquor licenses all along the lakefront.

"a million people spending the day getting drunk in Grant Park." wow, thanks for not only insulting me, but telling 1/6 of Chicago that they're violent alcoholics.

Every time I think the bs can't get any worse, someone tops it. Crowd control, to be sure, is difficult, but as with so much else, the Daley administration has just become too lazy even to attempt to deal with it. Like George Bush once said, government is hard, so we need to dumb down the city to make it more convenient for the bureaucrats to administer.

Sorry to disappoint you. I'm not with the City or any other agency - just a person who sat every year in Grant Park (trying to hear the GP Orchestra) while drunks vomited all around me.

But I am quite familiar with the liquor licenses you reference --thru my volunteer work in the community. The drinking will be limited to vendors' facilities.

Hey, I enjoy a drink or two myself. Its the danger that a large number of drunks were causing that made the Grant Park location such a challenge.

Let's see: Boston Commons: 500,000 people; New York City: 3,000,000 people. Somehow they manage they put these shows on every year without the city disintegrating. Poor, fragile Chicago that she can no longer be bothered to figure it out. So much easier to get rid of the rabble and leave the alcohol to wine-sipping yuppies on the beaches.