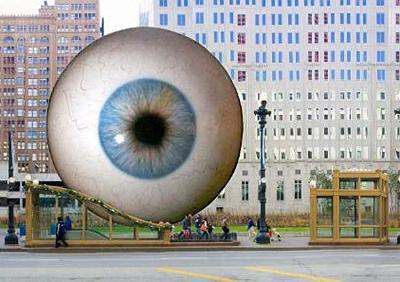 Continually pressed to find new ways to stretch revenue dollars in a troubled economy, Chicago Mayor Richard M. Daley has turned to an innovative team, made up of artist Tony Tasset, scientists at MIT'S Moureau Genetics Labs and legendary intelligence intercept expert Harry Caul. to create a cheaper, more economical alternative to the placement of thousands of cameras throughout the city to prevent and prosecute crime.

The first prototype of their creation, Eye, will be unveiled July 7th at Chicago's Pritzker Park. Thirty feet high, it will be able to see everything going on in a 20-block radius, both on the street and in building interiors, including washrooms if you forget to close the door. A fiberoptic central retinal artery connects to Chicago police headquarters, with a subsidiary thread instantly streaming especially embarrassing video captures directly to YouTube.

"Obviously we expect deterrence to be as much a factor here as documenting crimes," said city spokesperson Angelica Lee. "We think potential perpetrators will think twice having this humongous orb looking over their shoulder, or maybe just be so creeped out all they'll want to do is lie down and try to make the nightmares stop."

The cost of the project had been underwritten by Lancôme L'Extreme, which is also contributing the mascara for the Eye's lash. Murine will be donating the 27 gallons of drops required each day to avoid Eye irritation from State Street's exhaust and pollution. Should Eye actually water, however, or shed tears over the sadder aspects of the humanity passing by, all liquid will be collected and recycled to water heaven.

A second battery of conventional cameras will be set up watching Eye 24 hours a day to make sure no one pokes it with a sharp stick.

The project is already the object of strenuous protests from PETOBP (People for the Ethical Treatment of Out of Body Parts), who claim that keeping Eye open, all the time, forced to perpetually bear witness to the horror of mankind, is in fact a subset of the Ludovico technique, and therefore a form of torture.

The project is not to be confused with I!, a different MIT Moureau Labs collaboration, this time with John Mayer, which resulted in the creation of a 30-foot-high throbbing shaft, mounted on a flatbed truck that can be rushed to quell riot scenes by sucking rioters' raging testosterone out through their pores, or, should that fail, just using the shaft to beat them senseless.