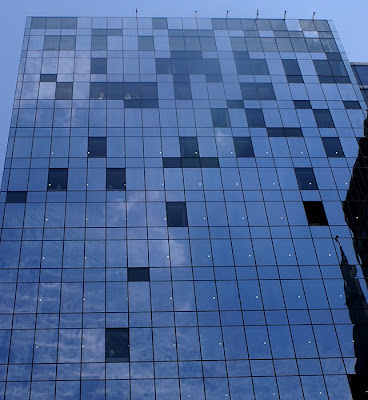 Last Friday, 77 mile-per-hour winds and a lot of unnecessary wetness stormed through Chicago's Loop doing rude things. Most of the publicity went to the two windows that popped out of the Tower Formerly Known as Sears. Two more cracked.

Big deal. The real action was over at 22 W. Washington, the 17-story Perkins+Will skyscraper anchoring the southwest corner of uncharmed Block 37. 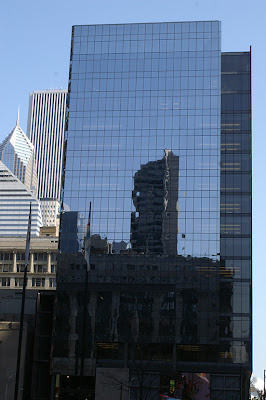 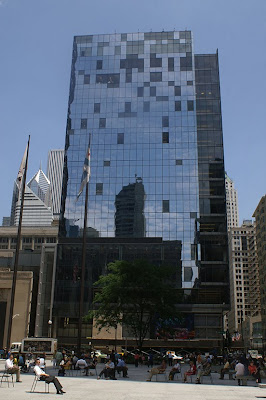 (Thanks, as always to our indefatigable correspondent Bob Johnson for all the great images accompanying this post.)

No fewer than 35 windows were damaged, shattered, according to news reports, by pebbles carried off the rooftops and hurled by the wind against the glass at a far higher velocity than that commonly required to get someone's attention.

When 22 West first opened in 2008, the Trib's Blair Kamin reported that the beleaguered developer used a cheaper quality of glass than that recommended by architect Ralph Johnson, resulting in unwanted distortion in the curtain wall's reflections of the buildings surrounding Daley Plaza.

Now, at least for the moment, 22 West's Dearborn facade is a late-Mondrian-like mosaic of dreamy reflectivity and dull, dark voids created where opaque, off-the-shelf replacement panes have been installed. It's like a picture puzzle with a lot of a pieces missing. And for the traditionalists among us, there's even a window boarded up with old-fashioned plywood. 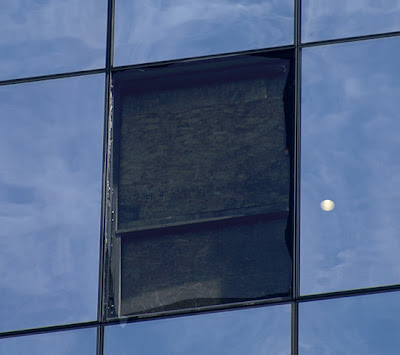 22 West would probably be a more interesting building if, instead of fixing things, they broke a lot more windows, and made the whole thing a more artful counterpoint of reflection and void, contrasting to the uniform mirroring of the structure's other elevations: the almost cliché illusion of structure dissolving into reflections, rudely interrupted by prosaic punctuations of materiality.

That's unlikely to happen, however, so enjoy the eccentricity while it lasts. 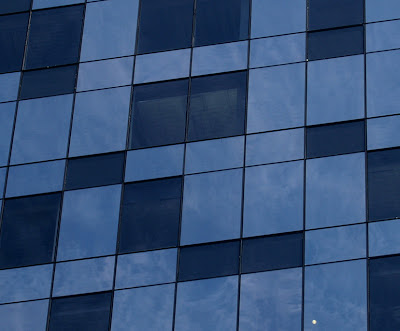 Wow, this building finally looks interesting. They should replace the broken windows with different glass to preserve this unique and random pattern :D Seriously!!

Too bad the TV screen wasn't knocked out during the storm

Okay, who's got the Tetris theme stuck in their heads now, show of hands...?

I agree on the different glass suggestion. Perhaps of different colors; now we're talking Mondrian. And, Lynn, I do love your post titles!

Great story, even better comment on how better the facade looks now, I totally agree (as does Kamin):)

I work in this building and agree that it looks better with this unintentional patchwork facade. It might also lessen the number of birds flying directly into it. That's a sickening thud I hope never to hear again.