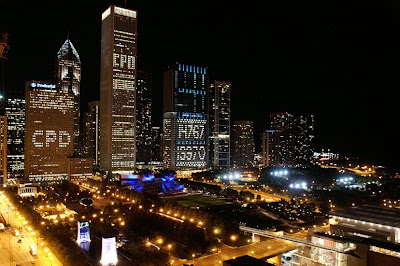 click image for larger view (highly recommended)
They compose one of the world's largest Lite-Brite sets, using the pixels of their windows to spell out the names of Chicago sport teams to celebrate a championship season.

Tuesday night, the lights along Randolph took on a more somber meaning, as they became part of the annual remembrance of Chicago police officers killed in the line of duty.  At the Gold Star Families Memorial and Park, on the east side of Soldier Field, a new bronze statue was unveiled to honor the sacrifice of officers who have suffered catastrophic injuries.  Candles were lit to symbolize the grief suffered by the families.  A picture of each of the 550 fallen officers was held by a police cadet, while their names were read aloud.

Along Randolph, as you can see in the spectacular photograph at the top of this taken by our correspondent Bob Johnson, both the Prudential and Aon buildings bore the initials, "CPD", while the Blue Cross-Blue Shield Building carried two numbers, badge numbers: 14767, belonging to Officer Thor Soderberg, shot and killed in an apparent robbery attempt on July 7th, and 13970, belonging to Officer Michael R. Bailey, who was shot and killed July 18th, a month from retirement,  attempting to stop a robbery in front of his home.

The blazing lights of the city, it's true, can drown out the stars.  Yet, on an evening like this, they are the beacon that refutes the black void of night.