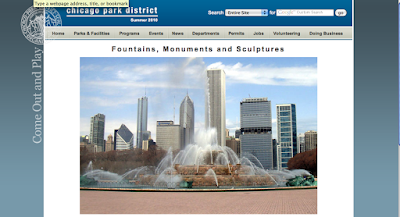 click images for larger view
OK, let's get past the bad stuff first. The web design sucks. In fact, there really isn't any web design, just a library of dead-end pdf's. No hyperlinks, no works by artist, name or subject, no sorting chronological or geographic. And if you don't know which park the work you want to learn about is in, be prepared to start clicking through a list of 67 until you find the right one. 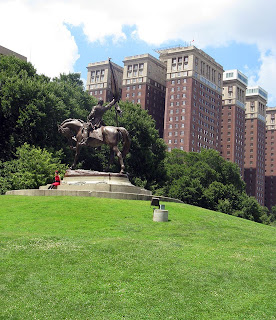 All that said, the new Chicago Park District Guide to Fountains, Monuments and Sculptures, now on-line after several years of research and work under the direction of Park District historian Julia Bachrach, is an amazing new resource. There's a PDF for each work - as I surfed through them all, Safari actually gave up, saying I had exceeded the maximum amount of open windows. The works and their histories are described in an informed, fact-packed text, and illustrated with both contemporary photographs by Park District photographers, and historical shots from the holdings of the Chicago History Museum.

To get back to our initial question, there's actually no one buried in the Augustus Saint-Gaudens/Alexander Phimister Proctor John Alexander Logan Monument east of Michigan Avenue at 9th street, although originally the rising hill beneath the sculpture was intended to be the final resting place for Logan and his wife. I never knew it was designed to be a tomb. Did you? 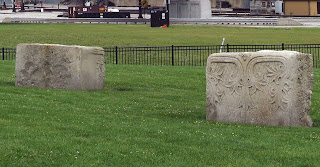 I've also always wondered where those big carved stones scattered on the site of the late, decrepit 12th street Metra Station were from. Now I know they're from Bradford L Gilbert's 1893 Central Station, with its great arched-ceiling waiting room and tall tower that personified the might of the Illinois Central, until the decline of rail travel led to its demolition in the 1970's. 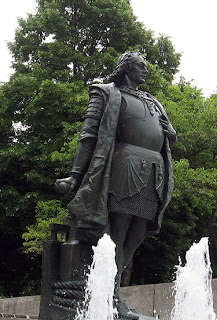 And did you know that the Columbus Statue in Arrigo Park at Loomis and Polk is actually the sculpture Moses Ezekiel created for above the entrance of W.W. Boyington's 1893 Columbus Memorial Building, which soared 240 feet into the air at the corner of State and Washington where Old Navy's stubby store now stands. Did you know the forty-foot-high columns at the Cancer Survivor's Garden came from Henry Ives Cobb's domed 1905 Federal Courthouse on Dearborn, replaced by Mies van Der Rohe's Post Office and Kluczynski Building? 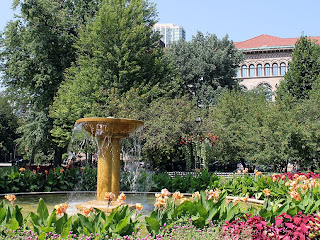 Or that the Tribune's Robert McCormick's $600 contribution in 1906 paid for half the cost of the Washington Square fountain that now bears his name, part of a series of improvements designed by Jens Jensen?  Or that in addition to our Standing Lincoln and Seated Lincoln sculptures, there was once also a Leaning Lincoln statue in Kennedy Park,  until the Women's Christian Temperance Union forced its removal?

Delving into the Chicago Park District Guide to Fountains, Monuments and Sculptures is like opening a bag of potato chips - you have one, then another, then another . . .  but it's a lot more nourishing. This is an absolutely superb compendium of images and information about Chicago's rich storehouse of public art, a seminal resource for historians, and an addictively entertaining read for the rest of us. Check it out here.

Damn You . . . that is going to give me hours of enjoyment. Wait. THANK YOU!!

Thanks so much for your review. I love the bag of potato chips analogy! We hope this will be a valuable resource to the public and appreciate your help in spreading the word. We are in the initial stages of a complete re-design of the CPD website and do hope to add maps, links, and cross-references when we launch the new site. Also, FYI, only one or two of the archival photos are from the Chicago History Museum. Most of them come from the Chicago Park District's own Special Collections, which I manage. Thanks again, Julia S. Bachrach, Chicago Park District

Great idea-long overdue. Anyone know the name of the park/area where the fountain re-dedicated to Harold Washington in North Lawndale back in 1988?

That is the 4th of July Fountain in Independence Square. Its not included in this survey because it is not in or contiguous to a park. Charles Mulligan was the sculptor and it is quite wonderful!

The new link to the guide to fountains, etc. is
http://www.chicagoparkdistrict.com/facilities/fountains-monuments-sculptures/