Getting Chicago Culture's Light out from under the Bushel - One Word, Benjamin: Streaming

If you're one of the people who actually check out my monthly calendars, you know - both of you - that there's always a wealth of great lectures, forums and presentations going on.  Like fireflies, they light for a moment and then disappear.  If you live anywhere else in the world other than Chicago, or if you just couldn't make it downtown that day, well, too bad for you.

It took cultural institutions a long time to figure out that whole internet thingy.  And they're still catching up to basic idea that public events needn't be disposables.

At one time, the Graham Foundation was making its lectures available online, but that seems to have fallen by the wayside  To best of my knowledge, the great Art Institute creates custom-made videos, but no streaming. 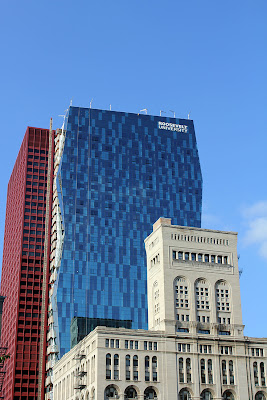 Now, the Chicago Architecture Foundation has taken the reins and gone where its more monied brethren have dared not tread.  I knew that last Wednesday's CAF lunchtime lecture with Lesley Slavitt of Roosevelt University and VOA's Christopher Groesbeck discussing the school's spectacular new dorm building was likely to be a good one.  Unfortunately, I couldn't get away (and it sounds like they had a full house), but, picking up on a CAF Facebook post, I was pleasantly surprised to discover that I could also take in the lecture on my computer as it streamed live. 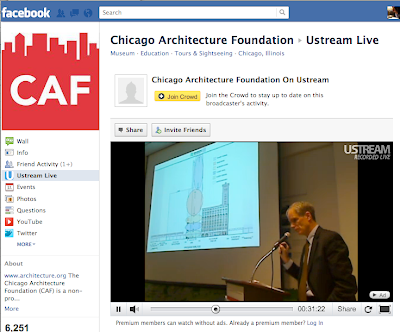 It wasn't anything fancy - just a single camera covering both the speaker and the projected slides, and there was, truth to tell, some major audio distortion problems - but it meant that even those who couldn't be there in person didn't have to miss out.  More to the point, a recording of the lecture is now available on the CAF Facebook page to anyone in the world via on-line streaming.

The technology - in this case via Ustream - isn't expensive.  In its basic form, including ads, it's actually free.  Surely Chicago's other great cultural institutions can afford free.  For a bit more money and effort, you could load the slides beforehand and actually show them in full screen with occasional cuts to the speaker.  You can go High Def or have multiple cameras.  You can even do green screen effects.  Think Alison Fisher lecturing on Bertrand Goldberg while appearing to be hanging by her thumbs off a Marina City balcony. (ok, maybe some bells and whistles you don't really need).

The point is that the technology is manageable and it's inexpensive.  How long before Chicago's major institutions transcend the 20th century and enter the 21st?

The Chicago Humanities Festival is already on the ball, posting YouTube videos of many of its lectures, including such speakers as Dan Savage, playwrights Tony Kushner and Sam Shepard, as well as the lecture by Jeanne Gang you see below.

Tonight, Tuesday, February 28th, the Chicago Architecture Foundation is offering the latest in its series of Chicago Debates: Beating the Odds: Designing a Casino for Chicago - Lakeside Resort or Bling Bingo in a Box, an all-star event moderated by Edward Lifson with Cook County Board President Toni Preckwinkle, the Reader's Mick Dumke, CNU's John Norquist, Kimbel Goluska and Dennis Judd.  (Apologies for the montage below.) 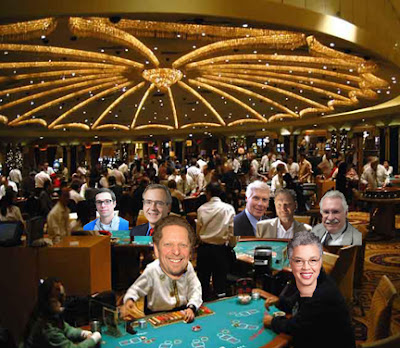 It starts at 6:00 p.m., it's free with registration, and it's at the fabulous Chicago Theater.  If you can, you should go.  If you can't, the CAF is streaming it for you, off of their Facebook page.  There's no link for it yet, but I'm betting there will be by 6:00 p.m. Tuesday.

If the CAF and CHF can do it, why not everyone else?  Chicago's riches shouldn't be a local secret.  They should be available to the world.

Lynn,
Thanks for this info, and for raising the suggestion of streaming. There's so much going on in Chicago, and at least a few of us from away who would otherwise attend, that it would be great to have this option.