Last week to send Bertrand Goldberg's Prentice a Valentine; but you can Activate urban acupuncture through the 29th - two current competitions 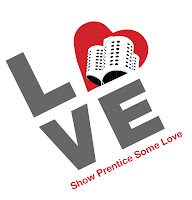 Show Prentice Some Love
After placing and then yanking the issue of saving Bertrand Goldberg's Prentice Hospital from their agenda last June, the Commission on Chicago Landmarks has been missing in action in what has become the most important preservation battle of the new century.  The Save Prentice Coalition continues to battle Northwestern's hidden omerta  behind-the-scenes gaming of the city's political system to remove all obstacles to destroying Goldberg's essential structure - the only world-class building on the sprawling Northwestern Hospital Streeterville campus - for what it admits will be a long-lived vacant lot.

The Show Prentice Some Love competition invites everyone to create their own personalized valentine to Prentice, with prizes for adults and for kids 13 and under.  First prize is "A rare copy of the catalogue for the 1985 Paris Art Center exhibition, Goldberg: On the City, signed by Geoff Goldberg (estimated value ‐ $300)"


There are no restrictions on the nature of the submittals. You can make your Prentice “valentine” in whatever medium you choose—photography, paintings, songs, short video (60 seconds or less), t‐shirt graphics, and construction paper valentine are just a few of the options. Entries can originate in any format, as long it can be converted to a digital file and emailed to us. If you have lots of ideas, don’t let that limit you! Multiple entries will be accepted from the same entrant. 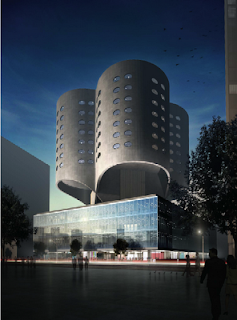 The valentine everyone is looking for would be from 42nd ward alderman Brendan Reilly, an energetic leader in saving Northwestern from demolishing the Lake Shore Athletic Club on Lake Shore Drive and keeping the Chicago Children's Museum from building in Grant Park, who hasn't had much to say lately on the battle to save Prentice.  Reilly's latest newsletter to constituents includes a diagram of the remapped 42nd ward that shows the new northern boundary running straight down Superior and right past Prentice.  Has the Goldberg landmark been pitched into the 43rd?  Strangely enough, 43rd alderman Michele Smith's depiction of the new map on her own website shows the 42nd still going all the way up to Oak Street.

Last April, Landmarks Illinois put the lie to Northwestern's propaganda that - cue the crocodile tears - no future use could be found for the building and they have no choice but to grind it into dust, by issuing a compelling report detailing several viable reuse scenarios.

You can download the complete rules for Show Prentice Some Love from the Preservation Chicago website here.

You've got until February 29th to get your entry in to another worthwhile competition (check out MAS Studio's winning entry for 2010.  AFP/Chicago's Katherine Darnstadt talks about the competition process in this video), to create minimal-cost, high-impact interventions into the urban fabric - this year at the Reilly Elementary School, 3650 West School.  According to sponsor Architecture for Humanity Chicago . . .


Through an acupuncture style small-scale design intervention, the ACTIVATE! competition challenges individuals to create one or more objects that can activate a vacant site, is universally accessible, and fosters multi-generational community interaction for $1,000 or less.

Building on the success of the 2010 competition, the winning designs have fostered a dialogue about open space and how design can be the catalyst for the creation of meaningful and joyful places that facilitate community engagement.  The 2012 competition site is a Chicago Public School with a ‘blind spot’ on their campus that attracts unwanted loitering and illegal activity.  Site photos, plans, project information and previous winning installations are located on the Open Architecture Network project page and email furniturecomp@afh-chicago.org the chapter directly with questions.