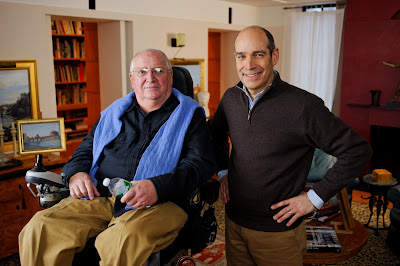 Yes, we've been MIA the last few days contemplating the meaning of life and our place in the universe, so we're a little late, but tonight, March 22nd, at 8:00 p.m. WTTW will be broadcasting the debut of Architect Michael Graves: A Grand Tour, a new documentary on legendary architect and designer Michael Graves, godfather of PostModernism the man who brought style to Target housewares, and the guy who survived a near-fatal 2003 illness that, at it's height, saw him looking around at his hospital surroundings and telling his visitors, "I can't die here.  It's too ugly." - a motto for us all as we move through the often appallingly disappointing built environment around us.

The documentary is produced by Daniel Andries, who also did the recent Jeanne Gang profile, and it's hosted by WTTW's ubiquitous Geoffrey Baer.

After tonight's debut at 8:00 p.m. , the documentary will rebroadcast Friday at 8:30 p.m., Saturday at 11:30 p.m., and probably several times after that.  Watch your schedules.  It should also be popping up in other markets.

WTTW has a great minisite on Michael Graves, including additional video content, here. Or you can watch the documentary in a small scale version here: