focus: Sharon Hayes, the first museum-based exhibition of the New York based performance artist, closes this Sunday, March 11th at the Modern Wing of the Art Institute. 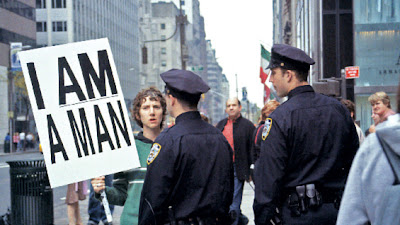 click images for larger view
It consists of three parts.  An Ear to the Sounds of Our History, from 2011, is a series of visual "sentences" drawing from  a huge collection of album covers from the "Spoken Word" genre centered around the 60's and 70's.  In the Near Future, from 2005-2009, uses 13 projectors covering all four walls of the gallery with a rotation of over 300 images of a single protester holding a sign for causes mostly already lost, such as the ERA and Vietnam War, in public spaces in cities from New York to Warsaw to Paris.

Sharon Hayes's work, as you might imagine, is overtly political, but its greatest interest, at least to me, is in the intersection of individual expression amidst the anonymity of public space.  In Parole, shown through multiple video screens of varying size, actress Becca Blackwell, mute but with an incredibly expressive and empathetic face, is the listener, the reflection of the expression, whether it be sitting at a desk in a small office, or walking through great public spaces such as London's Trafalgar Square with a boom microphone capturing Hayes declaiming a passionate letter to an absent lover.

In another, office-based video, U of C Professor Lauren Berlant analyzes the low status of sentimentality among academics.  Exhibition curator Lisa Doring writes that Hayes's inclusion of Berlant's analysis "is a reminder that politics, history, and even academia are inextricable from desire and love, a nation that lies at the crux of the artist's practice . . . " 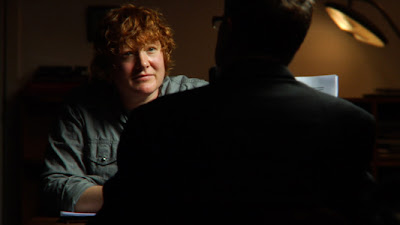 What interested me in Parole above all else, however, is the exploration of the relationship between public (and private) space and the emotional potency of the individual.   In that small office, Blackwell mutely coaxes a man, back is to the camera, into reading an intensely impassioned text, but in the context of that small room, sitting only inches away from Blackwell's inquiring face, the man defuses the power of the text by speaking the words in a flat, measured tone, as if reading a recipe.  This is his defense.  This is how defends himself from the possibility of being swept up - manipulated? - into a visceral, emotional expression.


In Trafalgar Square, Hayes is dealing with a huge public space, one made for rallies and mass congregations, where protesters grab a microphone to amplify their voice to the true scales of their passion, but where, on a common day, the massive square serves to deaden people much as dispersed, immobilized atoms push the cold towards absolute zero.  People come and go, or loiter lazily, largely oblivious to the architectural pretensions of their surroundings. Even as they pretend to ignore it, the sound of Hayes's voice cuts like a knife through the miasma of neutered feeling. 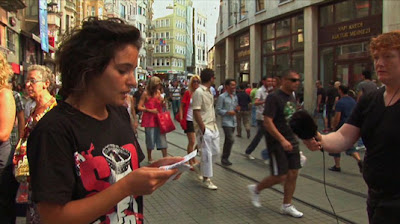 courtesy: Tanya Leighton Gallery, Berlin
All the more so in a constricted shopping street in Istanbul: a woman declaims Hayes's text in Turkish with such blazing intensity that it spills out beyond the usual unseen, apostrophizing frame of art, into an energy field engulfing, by chance, those randomly passing, emotion coursing like an electrocution through a circuit of complete strangers. 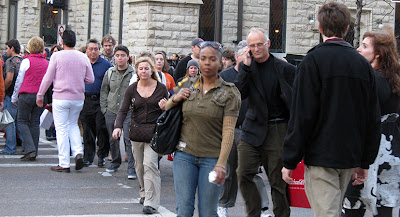 The human body moves through the public space in several ways.  Primarily, we are moving ourselves to an intended destination, led almost without thinking through the furrows of the urban fabric, closed off and in our own thoughts, as are most of those around us, the cell phone increasingly the virtual world walling us off from the one we actually inhabit.

Then there are those who are with others, talking, laughing as they walk together, providing a parallel soundtrack to the stream.  And there are those that actually distort the boundaries of the public space of pedestrian movement, shouting to someone in the distance, or even chasing each other playfully (let's hope) down the street. 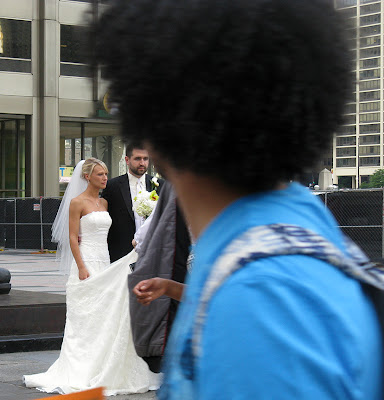 There are those who consciously choose that urban fabric as a backdrop for their ceremonies, creating a collateral street theater.

Then there are those who choose to bear witness by making themselves a nest in the architecture, both as groups engaged in a social action . . . 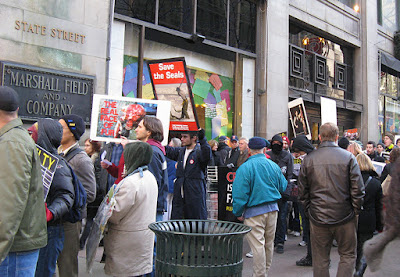 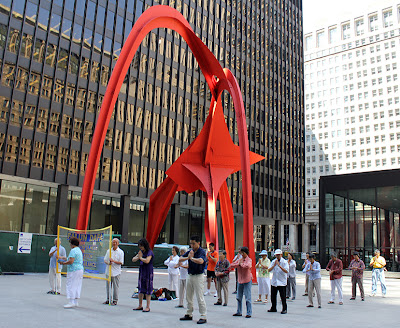 . . . and, lastly, as lone voices,  declarations of private psyches into a public realm where the standard response is to avert one's eyes  . . . 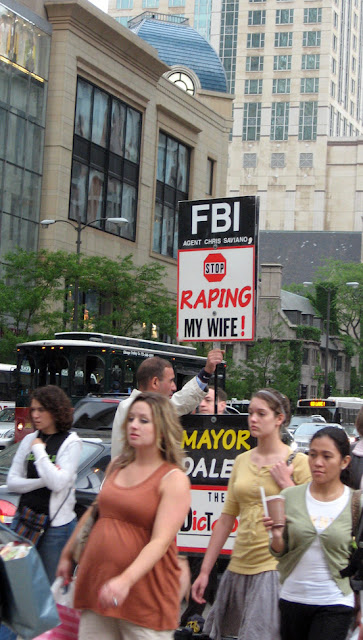 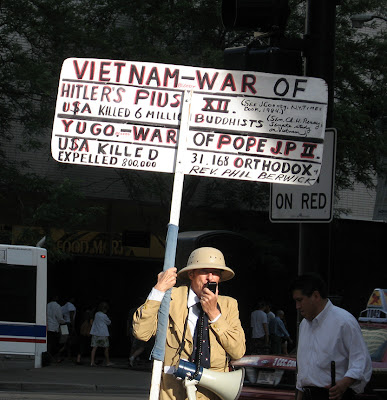 . . . the content a product of conscience, the obsession the manifestation of an inner wound.  In this time of the Internet and social media, where the confessional is but a keystroke away, is it bravery or insanity to assert an individual human body, its exhaled speech or expectant silence, against an unhearing streetscape and the unending stream of human animals, minds vacantly insisting on being somewhere else?


focus: Sharon Hayes runs through this Sunday, March 11th in
Galleries 182-184 of the Modern Wing of the Art Institute of Chicago, 111 South Michigan.