On Chicago's birthday, 175 years of history on just one corner: the Tremont, George Pullman, and Ira Couch 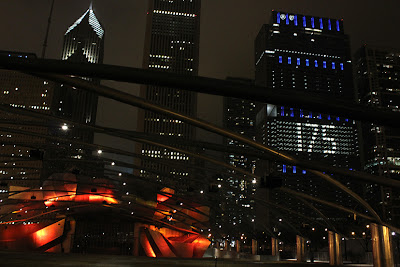 click images for larger view
Today, Sunday, March 4th, is the 175th birthday of Chicago, incorporated on this day in 1837.  If you hurry, there's a celebration at the Chicago History Museum from noon to 4:00 p.m.  Cake from Bleeding Heart Bakery at 1:00, and at 3:30 a panel discussion with Rick Kogan, Ed Burke, Laura Washington and Bill Savage. And at dusk, such landmarks as the Willis Tower, Hancock Center, Merchandise Mart, Union Station and Trump Tower will have special lighting.  Look for "Chicago 175" at the slope-toped 150 North Michigan, and "175" at Blue Cross/Blue Shield.

As for us, we thought we'd trace a bit of Chicago's history from just one corner, Dearborn and Lake.

The 1875 Lakeside annual directory of the City of Chicago includes an Chicago Business Directory of 1839.  It takes up only nine pages, and on the second we find of name of 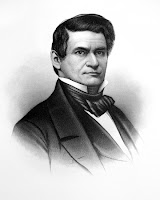 His name lives on in Couch Place, a former street that is now an alley between Lake and Randolph.  Couch, born in New York, moved to Chicago the year before incorporation, in 1836.  A licensed tailor, he soon sold his shop on Lake Street and leased the Tremont House, on the northwest corner of Dearborn and Lake, filled today by the residential tower 200 North Dearborn (formerly also the site of the Commercial Hotel.)  Across the street was the shop of Lewis Isbel, Chicago's second Afro-American barber, whose clientele included such luminaries as Abraham Lincoln, U.S Grant, and Stephen Douglas. 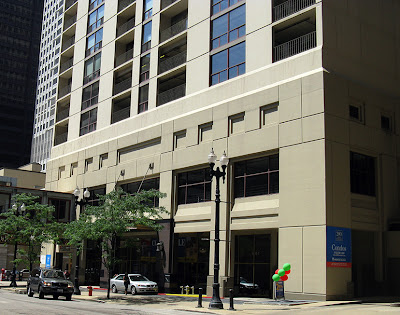 The Tremont House was Chicago's first freestanding hotel, an upgrade from the previous lodging options at one of the city's three inns - Billy Caldwell's Tavern, Miller's Tavern, and the Sauganash, in and around Wolf Point, where a parking lot for the building formerly known as the Apparel Center stands today, and where the Kennedy family plans to build three new skyscraper towers.

Within three years, the Tremont House burned down in Chicago's first major fire, on October 27th, 1839, which destroyed 17 buildings on Lake Street valued at $65,000.  "This naturally awakened the people to the advantage of insurance, and the business for that year increased very rapidly."  So, by the time the replacement hotel, built across the street on the southeast corner, burned down again, in 1849, there were hopefully insurance proceeds to help rebuild.  The Tremont soon became known as the leading hotel in the West. 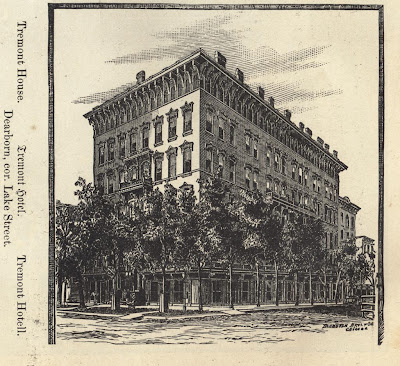 courtesy Chicago History Museum
"The second floor of the first Tremont House because home to Chicago's first billiard hall in 1836, and was the favorite hangout of an itinerant criminal named John Stone, who in 1840 became the city's first executed criminal, having been convicted of the rape and murder of a Mrs. Lucretia Thompson."  In it's early days, sportsmen would set themselves on the hotel's steps and shoot ducks on the surrounding marshland. 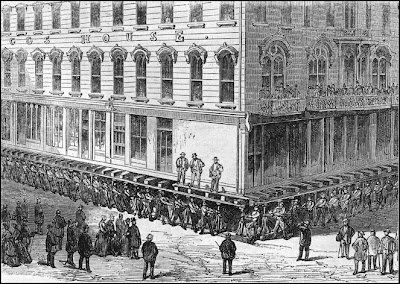 Raising the Briggs House, courtesy Chicago History Museum
A young George Pullman secured his fortune in February and March of 1861 by raising the Tremont six feet higher, out of Chicago's muck, using five hundred men to raise five thousand jackscrews, inch by inch, so that none of the Tremont's guests, including U.S. Senator from Wisconsin Timothy O. Howe, realized the building the inhabitated was moving with them in it, unless they noticed that the number of steps to the entrance kept increasing.  Pullman would make the Tremont home to the first offices of the Pullman Sleeping Car Company, which would go on to revolutionize long-distance travel, leading Pullman to create one of the world's foremost communities in the town of Pullman, and instigate one of America's most contentious and violent periods of labor strike with the 1894 Pullman strike.

It was from the balcony of the third Tremont House, in 1858, that Stephen Douglas announced his campaign for the United States Senate.  According to the Chicago History Museum's excellent The Great Chicago Fire: Web of Memory website. . .


In Lincoln, Douglas, and Slavery:  In the Crucible of Public Debate, David Zarefsky describes the evening of July 9, when Douglas launched his campaign with a speech from the hotel’s balcony.  Lincoln, in Chicago for the opening session of the United States District Court, was in attendance.  When he heard Douglas attack his “House Divided” speech as endorsing radical abolitionism, Lincoln announced that he would appear at the hotel the following evening, as he did, to respond.

And it was at the Tremont that the defeated Presidential candidate Douglas, who often stayed at the hotel, died suddenly on June 3rd, 1861, less than three weeks after the attack on Fort Sumter that marked the beginning of the great Civil War.

In 1855, hotelier John Drake, whose son built the Blakestone and Drake hotels we know today, had secured a one-quarter interest in the Tremont, and soon owned it outright.  When the structure burned to the ground in the Great Chicago Fire of 1871, Drake made the Michigan Avenue Hotel, at Congress and Michigan, the only hotel on the near South Side not destroyed by the flames, the temporary Tremont. 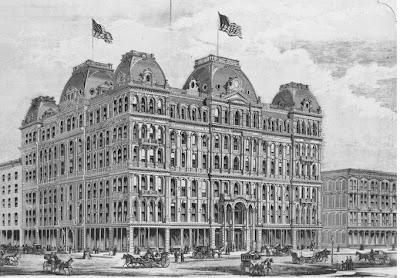 image courtesy Chicago History Museum
The last Tremont House, six stories tall and designed by Chicago's first architect John Van Osdel,  opened in 1873  In 1902, it became home to Northwestern University's law, dental and business chools.  The structure was demolished in 1937, replaced by a parking garage that was itself replaced in 1987 with the Theatre District Self-Park, where every floor was named after a Broadway musical.  Sportsmen no longer congregate: the only ducks to be found in the environs Tremont's former site are when the Goodman programs Ibsen. 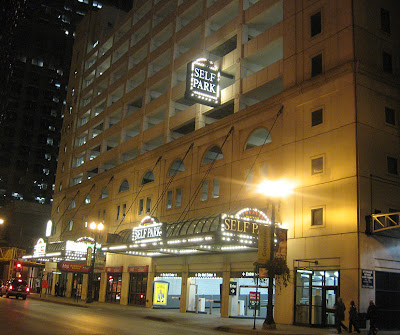 And Ira Couch?  He's still around, although he died of "complications of disease caused from sudden cold" while on winter sojourn among "Cuba's sunny isle of fruits and flowers".  The balconies of the Tremont were draped in black. Eighteen months later, his remains were interred in the $7,000 family tomb, designed by Van Osdel, in the City Cemetery.  Weighing one hundred tons, it required eight horses to set into place.  When the graves in the cemetery were removed in the 1870's to create Lincoln Park, it was estimated it would cost $3,000 in 1877 dollars to move the Couch Tomb, and so it remains there - with the remains of Ira Couch - to this day.

Ira Couch was here a year before Chicago's 1837 incorporation.  Maybe he'll be one of the few things left after the glass towers crumble, the raised streets collapse to the terrain's normal level, and Chicago otherwise disappears from memory. 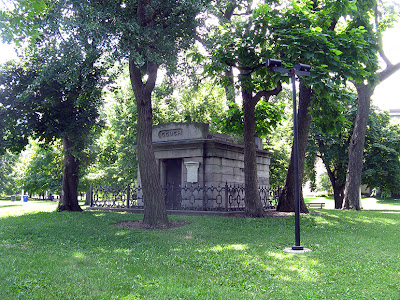