Scotland gets it's 100-foot-high Kelpies - what animal should Chicago supersize? 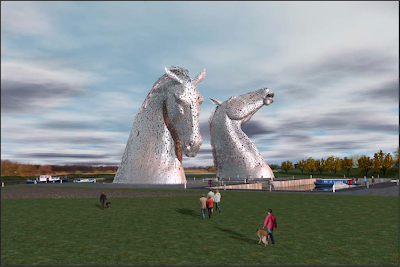 click images for larger views
Glascow-based sculptor Andy Scott has been working on the project since at least 2008, two nearly 100-foot-high horse head sculptures, mosaics of interconnected plates of steel designed to resist corrosion, to be erected by the River Carron in Scotland to become the visual icons of a new 740 acre park called The Helix being created on underused land between Falkirk and Grangemouth. Below, from Scott's website, is the artist with two of his models. 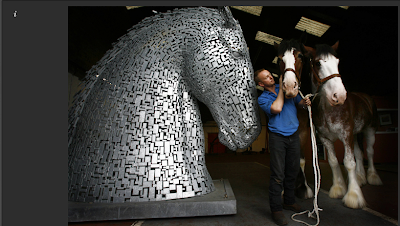 The Kelpies, as the sculpture is called, refers to the mythical beast said to haunt Scottish waterways, shifting between spirit and flesh, luring children to ride on the adhesive-like surface of its back, only to then plunge to the bottom of the river to drown them and eat their hearts and livers.  Not exactly a tourist-magnet tale, especially when you consider that one story says the Kelpies came into existence to avenge man's desecration of the land.  Falkirk was a heavy-duty manufacturing center during the Industrial Revolution, and the River Carron, itself, was the site of a major oil spill in 2009.  A 2007 film, The Water Horse, made the tale more family-friendly, but the pic pretty much did to Columbia Pictures what The Kelpies were said to do small children, drowning the studio's investment in anemic box office.

Kelpies were also said to sometime take the form of beautiful women, luring artists into another excuse to paint naked babes and call it high culture.
But I digress . . . .


The Kelpies are to be erected near the 115 feet in diameter Falkirk Wheel, a spectacular boat lift completed in 2002 to replace a series of 11 separate locks that connected two waterways nearly 80 feet apart in level.  At one point it was mentioned that The Kelpies would actually move back and forth as if they were raising or lowering the wheel, but I'm not sure if the animation has survived the final cut. Andy Scott first realized The Kelpies as 10-foot-high maquettes that were placed first at the Falkirk Wheel, and later Edinburgh airport. 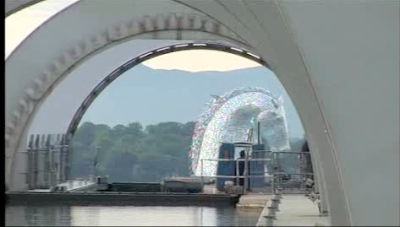 On Thursday, it was announced that Nicol Russell Studios have won a global competition to design the £41 million Helix Project (£25 to come from the British Lottery's "Living Landmarks" fund), including a visitors centre and public spaces within the massive horse heads.  Visitors will be able to go up to a viewing platform that will allow them to look through the horse's eyes out over the Forth valley.  Unless it drags them off to drown them in the canal first. 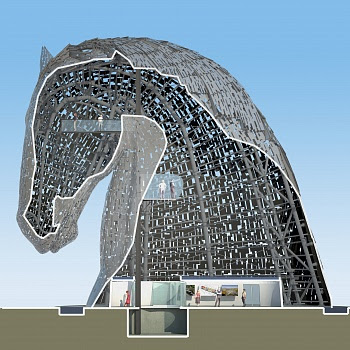 Which brings us to the question:  Why doesn't Chicago have any supersized animals? (The Picasso excepted.)  What would be the most appropriate manifestation of our culture and character?  A giant bunny?  A coyote returned from the wild?  A massive squirrel with a Thomas Heatherwick tail?  A 1,000xlife-size pigeon pooping colorful disinfectant blobs into Bubbly Creek twice every hour?

Back in 2005, for the Stanley Tigerman project Visionary Chicago Architecture, Joe Valerio proposed a Musee de L'eau, positioned at a replacement set of locks where the Chicago River meets the lake. 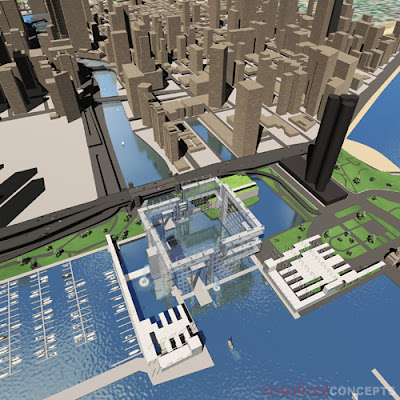 If not a Musee, could we have Richard Hunt create a pair of giant Asian Carp to stand at the Chicago river locks?  If the locks are closed, as has been proposed, could we animate the carp sculptures to devour any vessel reckless enough to try to enter now hermetically sealed Lake Michigan?

The no-nonsense, less-is-more character of Chicago architectural history would appear to argue against anthropomorphism in construction, but are we denying ourselves?  Would Chicago ever had become Chicago without the horse?  Or, more to the point, the hog? Animals continue to hold a elemental power over us, representing the Dionysic power of our primeval selves.  Is it time to bring that animal out into the open, into Chicago's built environment?

An interesting article. By complete coincidence you may be interested to hear that I have just installed the 1/10th scale maquettes at an outdoor sculpture show "Chicago Sculpture International" here in the city. They will be on display for one year, and are located near the lakefront walkway outside the Field Museum. Regards, Andy Scott