Bargain Day on the Street of Regrets: Interior Architecture Gnawed Clean at a Doomed Dominick's

On Saturday, the tan-shirted employees of the soon-to-be closed Dominick's at 255 East Grand were keeping themselves busy in what has become a ghost of a store, conscientiously scrubbing clean all the empty racks, coolers and shelving, even though - if rumors of Whole Foods taking over the space proves true - it'll all probably just be pitched in a dumpster to make way for a redesign. 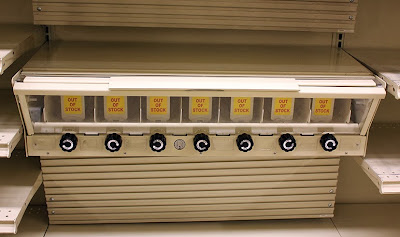 At its peak, Dominick's was a strong rival to Jewel in the Chicago food market.  Today, it's toast.
The chain, begun by Dominick DiMatteo in 1918, was bought by  Safeway in 1998, which proceeded to run it into the ground, all but completely ignoring the emerging competition at the high end by Whole Foods and the low end by Target and Wal-Mart. 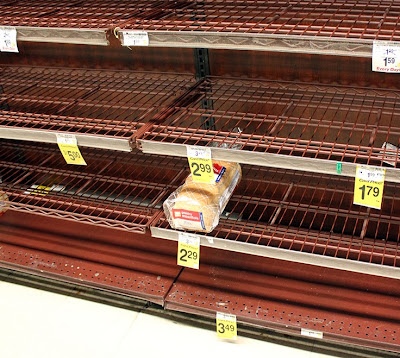 From a company that was the strong-runner up to Jewel in the Chicago market, with 116 stores and 24% share,  Safeway created a Dominick's with 44 fewer stores and a plummeting 14.5% market share.  And then, in October, they announced they were exiting the Chicago market, abandoning what they hadn't managed to destroy.  Safeway is picking the pockets of taxpayers by converting their managerial incompetence into a tax benefit estimated at nearly half a billion dollars, even as they're throwing 6,000 employees out on the street, effective December 28th - Merry Christmas!  Now we just need to wait for some University of Chicago economist's declaration that it can all be blamed on workers belonging to a union, making a living wage and not staying in school to get their MBA. 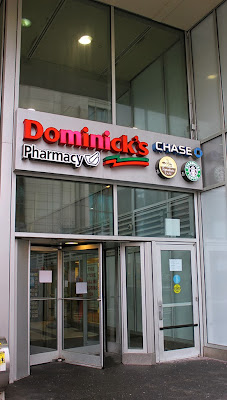 It was only seven years ago, in 2006, that the Dominick's opened in Streeterville at 255 East Grand at Columbus.  The first major chain grocery to open in Chicago's increasingly residential downtown, it was a highly welcomed event.  Just one year later, the 50,000 square-foot store's real estate - plus 100 parking spaces - sold for $23 million. 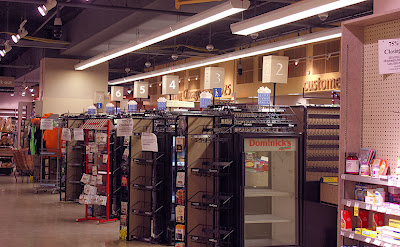 Today, it's counting down the hours, with customers almost outnumbering the remaining pieces of merchandise.  Eccentric collections of least popular products huddle tightly together in ever-shrinking islands within a rising swell of otherwise emptied shelves.  It's like a homage to shopping in the old Soviet Union. 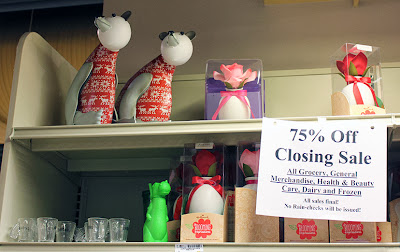 The structure that disappeared behind row upon row of thousands of different products in colorful packaging carefully designed to grab our eye now stands as bare as bleached bones.  A stark, inhuman geometry is revealed, a stacked sequence of fragmented lines stretching to infinity, leading nowhere. 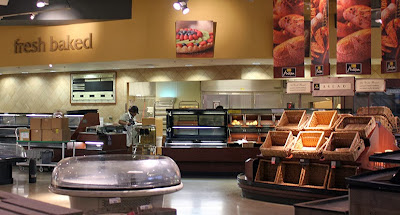 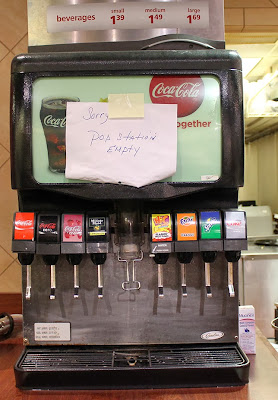 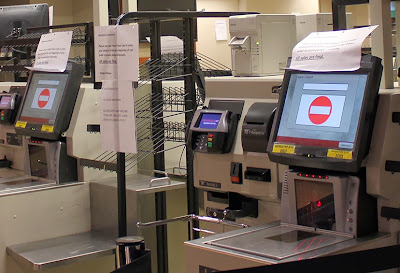 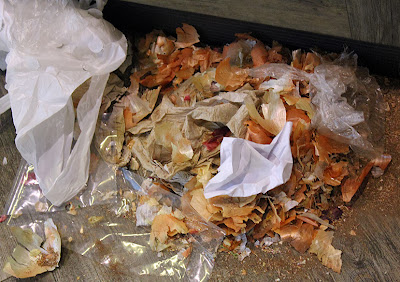 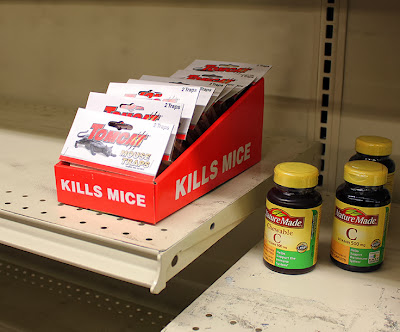 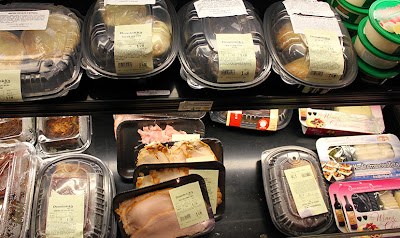 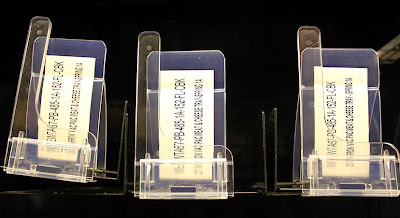 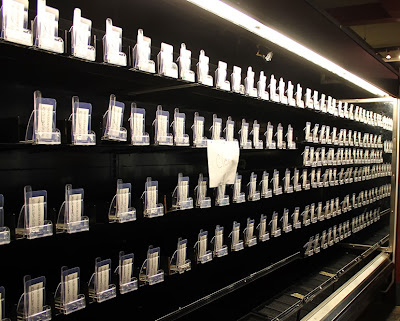 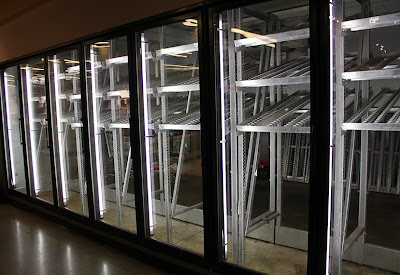 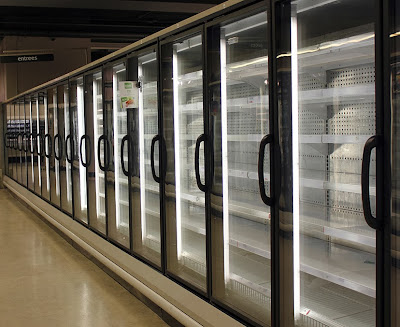 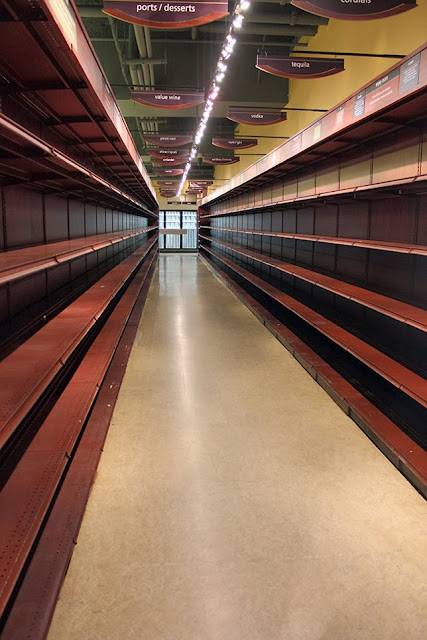 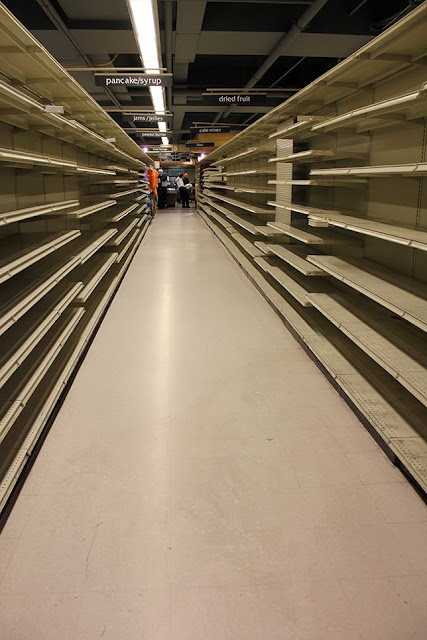 Actually, fixtures like this are often sold at fire-sale prices to resellers, who market them to other retailers (usually independents). Some are custom-built for certain products, but most are highly modular and can be reconfigured endlessly.

I doubt these will end up as scrap, although the mass closure of Dom's locations will definitely flood the market for secondhand fixtures.

I actually got scolded for taking pictures at the River Forest Dominick's (the oldest in the chain). "We don't know what you're gonna do with those pictures." They said to call corporate affairs for permission!

Some people like to do their job until the dying breath, I guess.