John Ronan walks us through his first skyscraper, 151 Franklin

“Here's the site,” said Dominic Adducci, “I think we all agree it could use a little attention and love.”

In the eyes of the site's owner - and Adducci's boss - developer John Buck, “a little attention and love” comes in the form of a 36-story office tower, to be named after its address, 151 Franklin.  Buck was in attendance but let Adducci do the talking for him at last Monday's community meeting on the project presented by 42nd ward alderman Brendan Reilly. (Reilly has made Buck's Powerpoint presentation available for download here.)

It's the initial step of a public review process that he hopes will end in the demolition of the Walgreen's currently on the site next July and the first tenants moving in to his shiny structure in September of 2016.
The skyscraper is the first tower to be designed by Chicago architect John Ronan, best known for his school designs such as Christ the King and Gary Comer College Prep, and the striking new home for the Poetry Foundation. Ronan spoke about the challenges of designing a skyscraper in a video presented at the meeting . . .


For me the most unique and interesting challenge of this is how do you take this building type of which there are hundreds and hundreds of buildings and do something unique.  And I think we've rethought it from a different vantage point - not from a formal aspect but from more of a spatial aspect, so the character of the building is really comprised of two contrasting qualities.  We have this very earthbound, heavy base of the building which is out of a basalt stone which is actually a gray volcanic rock .  The contrast with that is the tower itself, which is very clean, light and technical in appearance.  What this building is about is experiencing it and being inside of it and finding that place in which you feel comfortable.  And it's about new discoveries.  It's not something you understand in a single glance.  It's something you have to go through, walk through, experience it and when you leave you say: Wow - you know, that was really great.

The idea of solid stone at the base and a lighter cladding above hearkens back to Chicago's earliest skyscrapers, many of which featured rough-cut ashlar stone at the bottom providing the appearance of a solid foundation to the tall shaft with its thinner cladding - in brick, stone or terra cotta - that more frankly expressed the structure's metal frame.

After Adducci provided an overview to the project - 25,000 square-foot, column-free floorplates, 825,000 square-feet overall, with retail and restaurants on the ground floor and a sky garden on the roof, Toronto's skyscraper associates Adamson Associates as architects-of-record, and Lend-Lease as the general contractor - he turned the meeting over to Ronan to walk attendees through the project.  We captured his talk below, complete with our usual bad sound, out-of-focus photography and Cabinet of Dr. Caligari camera angles . . .

One of the more interesting aspects or Ronan's design is his concept of public space.  At 151 Franklin, a large amount of the open plaza space is actually tucked under the building.
Unlike the grand arcade at Buck's 155 North Wacker, just across the street, Ronan seems to be encouraging people to linger, with cafe seating and steps made for sitting.  (This actually evoked stress in one meeting attendee who anticipated the open area becoming a smokers haven that would force her to walk in the middle of the street to be able to get a breath of fresh air.)
Even more interesting is the second-level garden terrace  reached by a thin, long staircase rising up from Randolph Street. 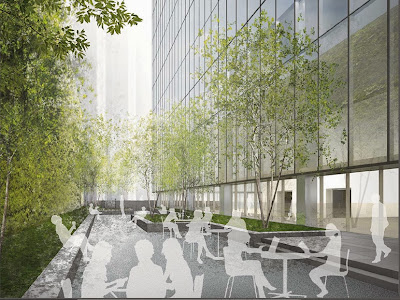 Placed in a sliver between 151 Franklin and the parking garage structure next door, this would be a public space that would both serve the new building and serve as a sheltered refuge from the bustle of the street. 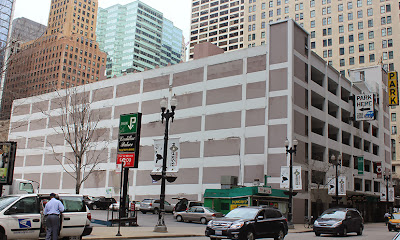 Buck says the rude facade of the parking garage will receive a more attractive surfacing, and he's bought the air rights above the garage to prevent another tower from rising next to 151 Franklin. 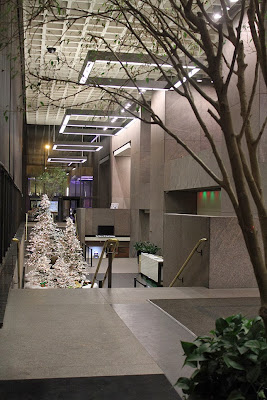 For all of its more progressive aspects, Buck has carefully engineered his tower to serve the new feudalism of our supply chain world.  Despite increasing reports casting doubt on the efficacy of those work-benched open offices currently so in vogue with management, Buck, in a video, sells the concept not as a command-and-control strategy coming down from above, but as something workers supposedly are clamoring for: “A more recent change is that as young people enter the workplace they want a different environment, more casual, more interfacing with their colleagues, so the private office is not disappearing, but it's on the wane.”  Similarly, much was made of the fact that Buck's building's 34 parking spaces actually represents a reduction in the number of spaces of the surface lot currently on the site, but those spaces aren't for just anyone - they're 34 “executive spaces.”  Like open-space offices, transit-oriented development is a great thing to force on 151 Franklin's 3,600 rank and file employees, so long as it doesn't affect the habits of the top brass.

Is 151 Franklin coming late to the party when, only a few blocks way, a million-square-foot River
Point is already under construction, and a 1.2 million square foot 155 North Riverside is well on its way to groundbreaking?  Are there any anchor tenants left to be had?

“All three of the projects are in the lease stages right now,” answered Adducci.   “The finance part of this project I can tell you that, having been with other developers for many years before coming to The Buck Company, it's very conservatively financed.  Over half of the project costs are equity,  so the actual debt on the project is quite low.  And we are working on several major tenants right now who are prospective at this point.” 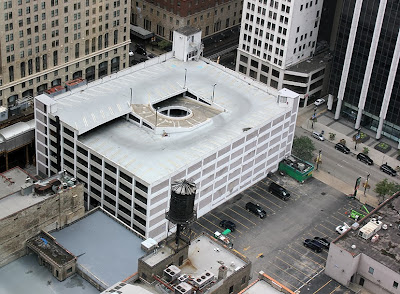 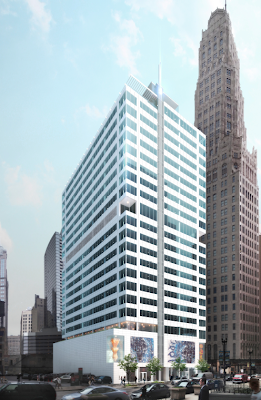 I have a great deal of respect for Mr. Ronan and his work. It is therefore disappointing to read the comments attributed to him at the meeting. They seem oddly inarticulate, informed by current cliche and rather lame - -which his architecture is decidedly not. I don't really understand the need for a "unique" building; nor is one likely here. Personally, I'll settle for a very, very good one -- which this promises to be. I guess articulate architecture trumps articulate exposition.