Like a Model T Ford, you can generally have architecture in any color you want, as long as it's gray or black (or white, if you're Richard Meier).  A large part of this, of course, is due to the material's natural hue, or to the fact that black paint is often on sale since no one wants to buy it for interiors.  A larger factor, however, is the basic fact that monochrome has a way of seeming to go with anything, and never being in danger of going out of style, which is more than can be said for Victorian polychrome or post-modernist salmon. 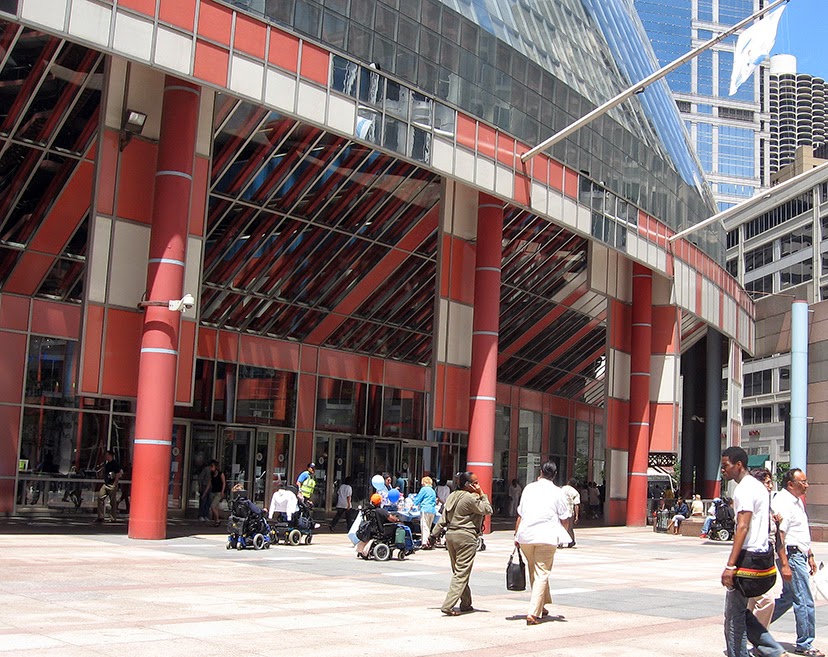 The early skyscrapers that rose up, early this century, at the massive Lakeshore East development on the site of the old IC railyards, followed this safe pattern, classic glass boxes, bland as paste.  2007's 340 on the Park, by SCB's Martin Wolf, broke through with a bit of sculpting, and Jeanne Gang's Aqua blew up the place with its undulating balconies, but both building's fed their distinction through form rather than color. 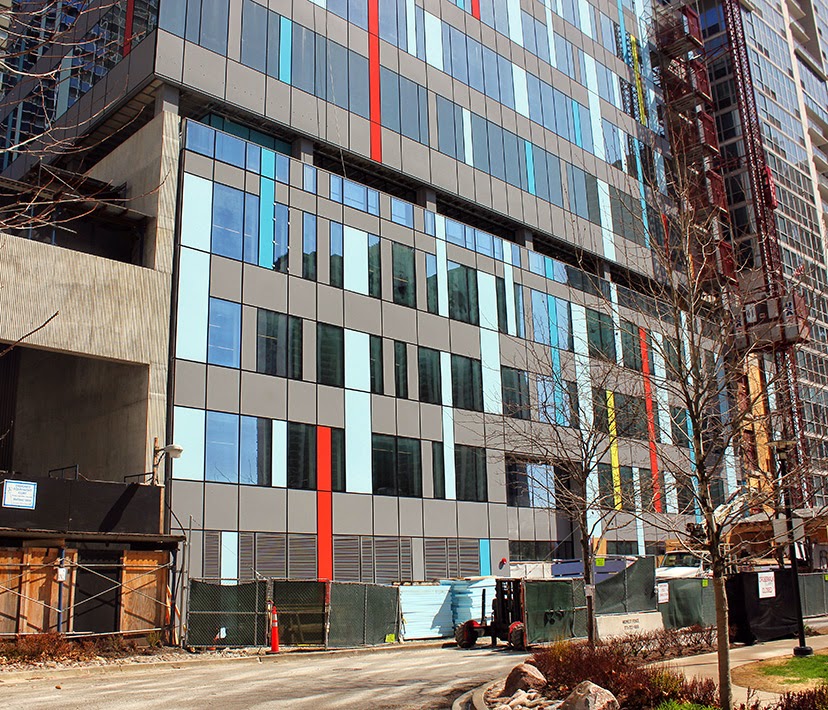 Now the LSE towers are being upstaged by a rambunctious stump, the new ten-story home to the GEMS World Academy Chicago, part of a rapidly expanding international chain of private schools founded in Dubai in 1959.  Designed by bKL architecture, the 82,000 square-foot structure due to open this September, a year later than originally projected, is known as the Lower School, either because its shorter than the second stage building to be constructed on East Wacker, or because it will serve students from Kindergarten through 4th grade.

The exterior is a combination of translucent and clear vision glass set flush within metal panel spandrels and mullions.  What sets it all apart is a crazy-quilt intrusion of colorful mullions in red, yellow, turquoise and robin's egg blue. 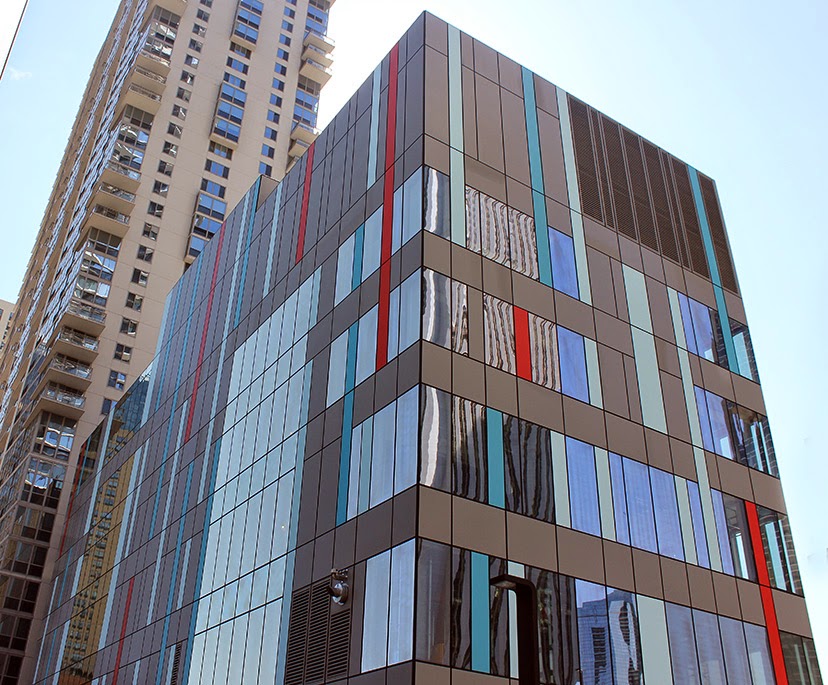 The north elevation of the building is basically a continuous flat surface.  Here, yellow is banished from the palette, and the colored stripes seem a bit passive and inert. Meh. 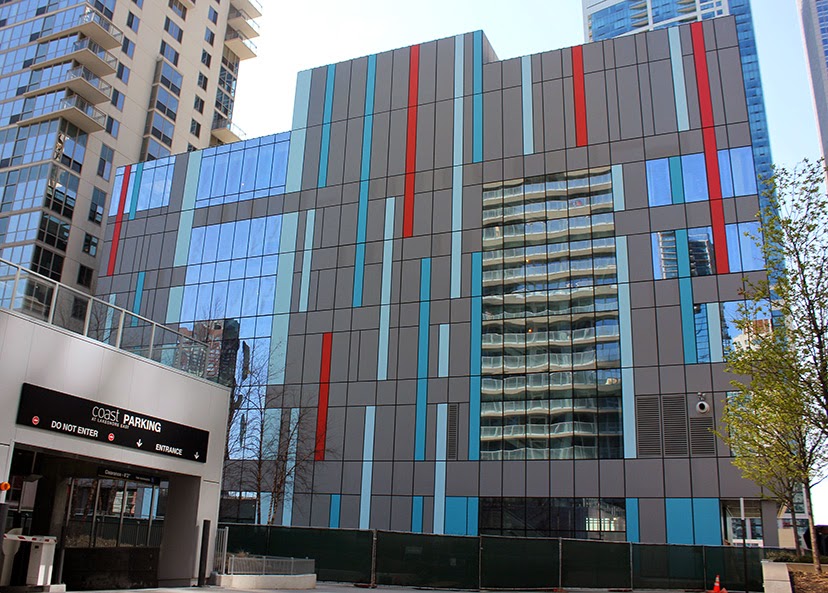 The southern facade, extending below the street down to the lower-level park,  is much taller, but the way the facade is broken up above the fourth floor and along the open air play area on the roof makes it read as a very horizontal building, pulled skyward by those vertical bands of color.  The counterpoint holds the vertical and horizontal in a satisfying visual tension. 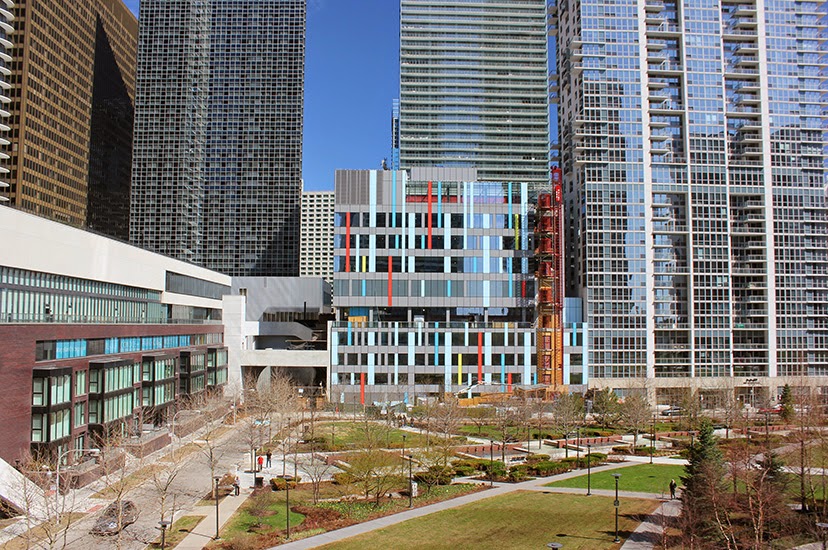 Is it too much?  Not for me.  Will it date badly?  I'd put it at a 50-50 shot.  For now, Gems Chicago has the slightly exhausting charm of a hyper-kinetic toddler, running at the knees of the far taller,  boringly behaved adults all around it, laughing with delight in refusing to be ignored.
Read More: 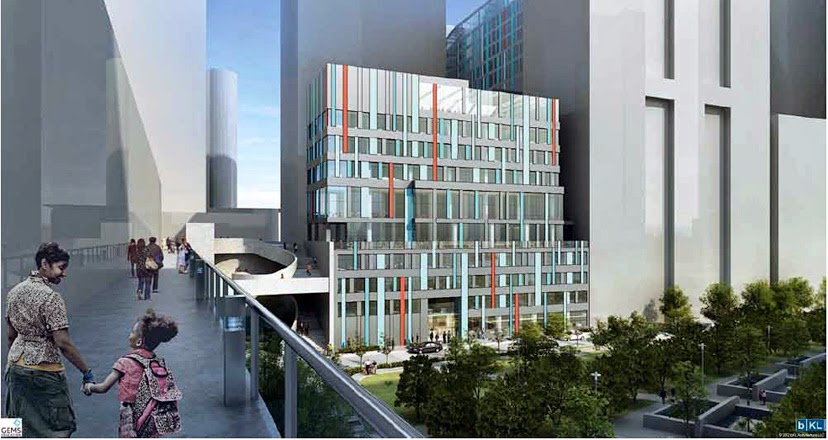