Along Chicago's New Skyscraper Row: One Rises, One Descends, and One Just Spreads it Around

Saturday seemed a good day to check out the progress and three large construction projects that have made the bend of the Chicago River big development central.

See the complete photo-essay, after the break . . . 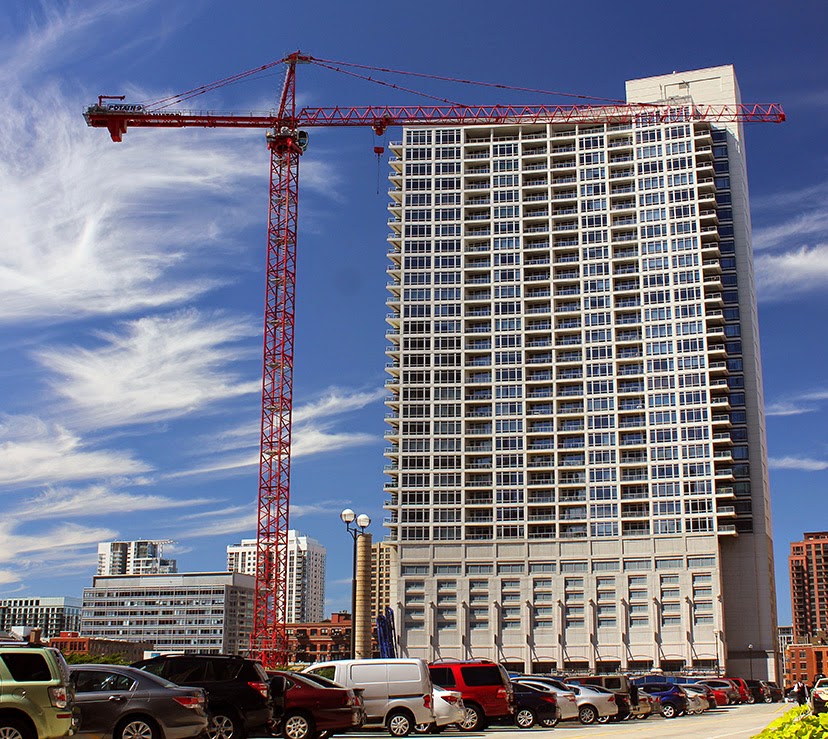 At the former service parking lot at Wolf Point, construction crews were hard a work (does everyone get time-and-a-half for Saturdays?). Cranes were in place, and rising from the ground was the concrete service core for Wolf Point West, the river-hugging, 493-foot high, 510 unit residential tower from bKL Architecture that's the first three projected skyscrapers for the site 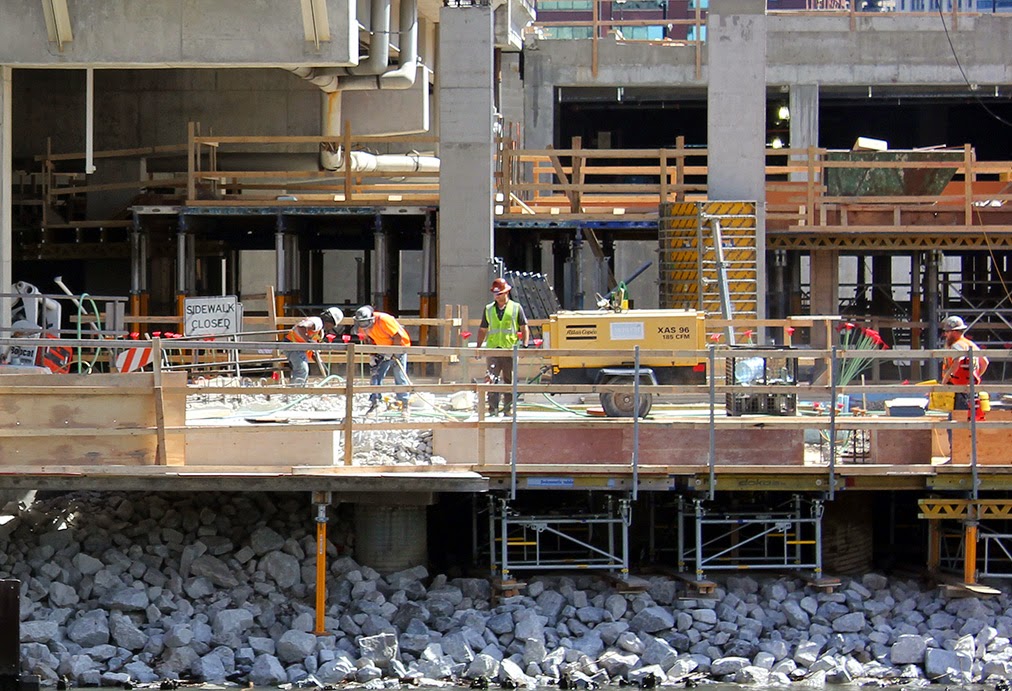 The concrete structure that's the support a long driveway and entrance to what will eventually be a large below-grade garage looks already to be in place. 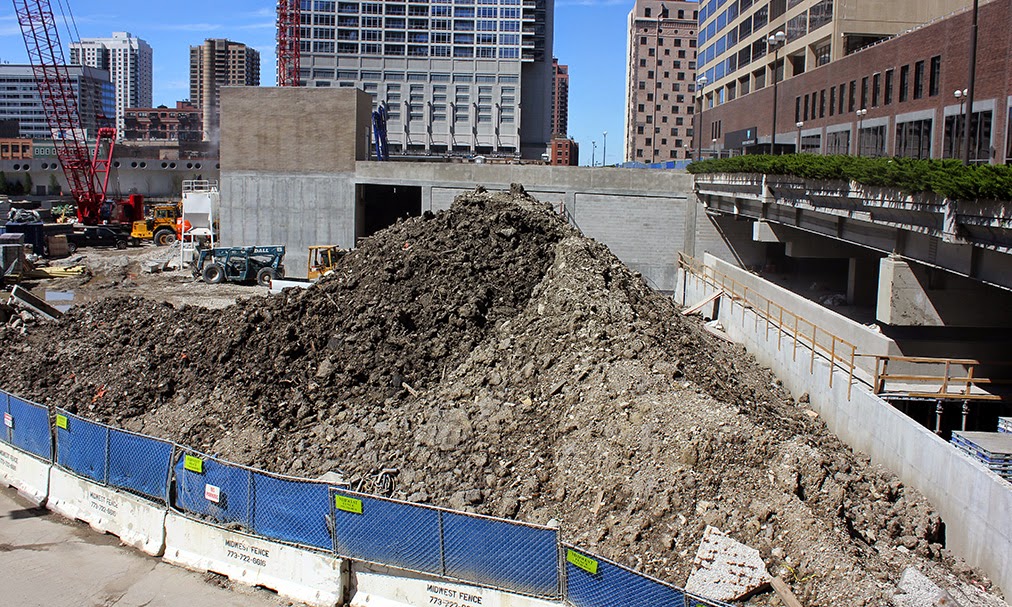 Wolf Point West will also include a tight stub of parkland to the east and west, while the far larger park that supposed to separate the three towers will continue to be the truncated remnant of the original surface parking lot until funding is in place for the other two towers. 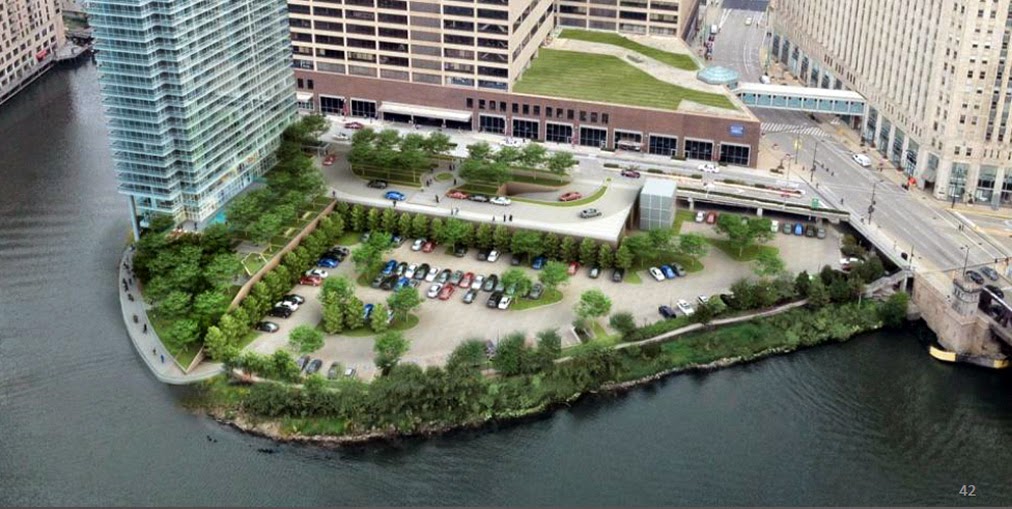 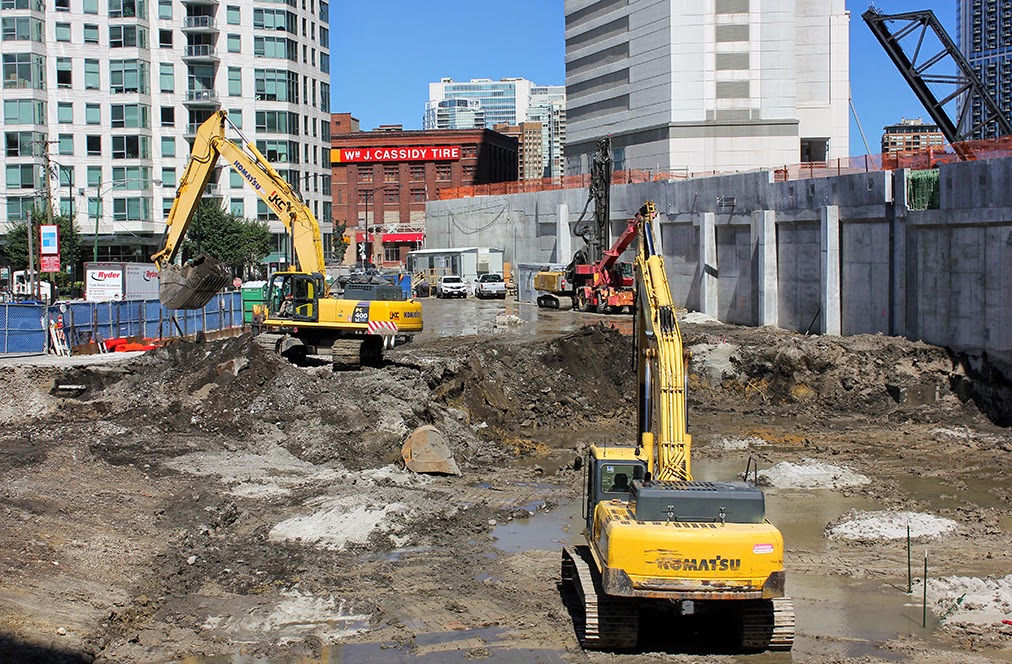 On the opposite bank of the river, a bit to the south, the concrete structure that covers the Metra tracks and will provide the surface for the new 1.5 acre park that's being financing by $29 million in Chicago TIF funds.  Nonetheless, that park is not scheduled for another two years, upon the completion of the 52-story River Point office Tower at 444 West Lake Street, designed by Pickard Chilton and scheduled to open early in 2017 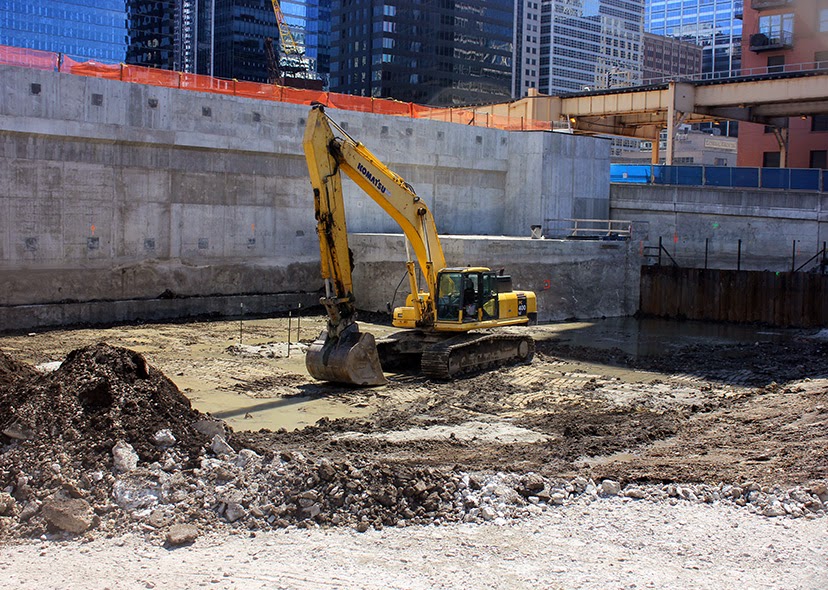 Right now, not only is there little visible above ground, but they're digging a deeper hole.  The week's torrential rains had left the site a soggy mess, but that didn't an industrious shovel operator from continuing to excavate soil. 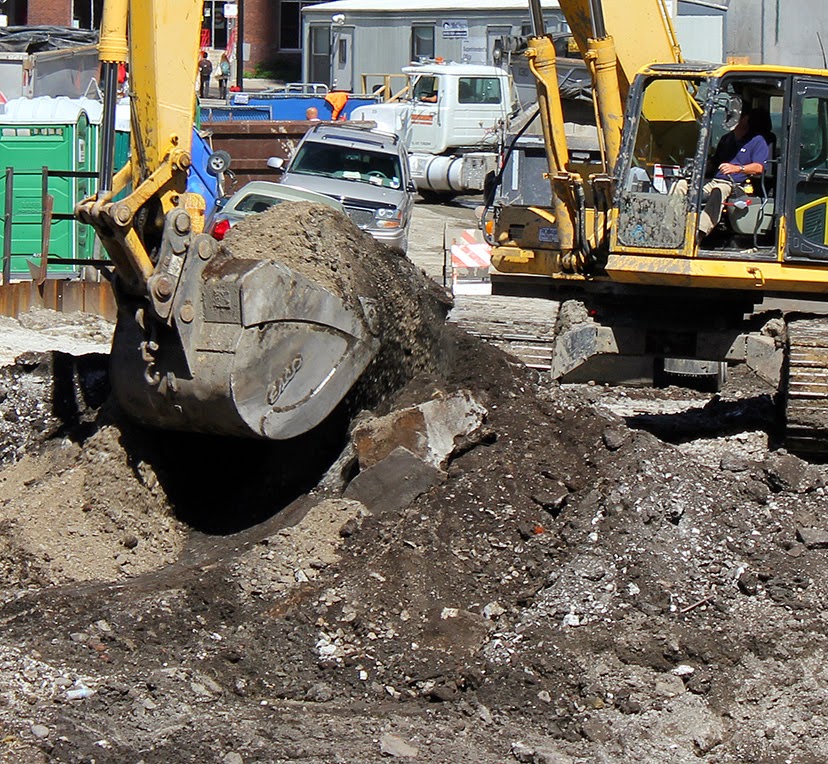 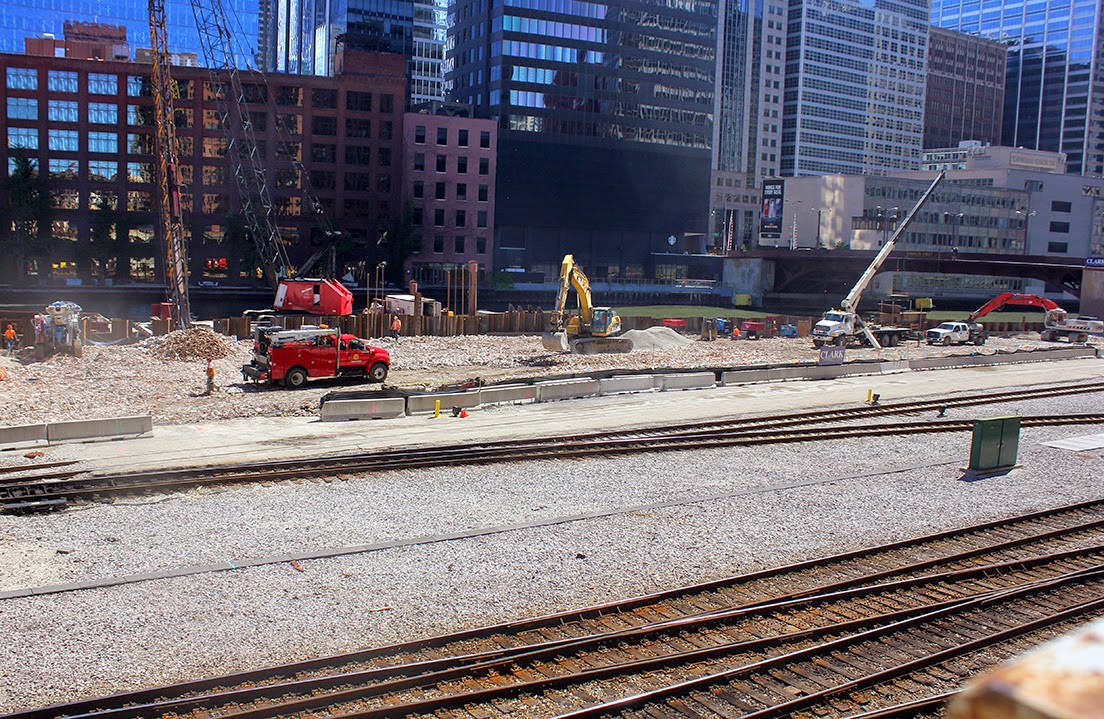 Perhaps the most interesting goings-on were at the site for 150 North Riverside, a 1.2 million square-foot, 53 story, Goettsch Partners designed tower that's been competing for tenants with River Point, moving towards a scheduled 4th-quarter 2016 completion.  Last week, Crain's Chicago Business was reporting that developer John O'Donnell has just nailed down almost $300 million to complete financing for the half-billion dollar building, which he claims is already 28% leased. 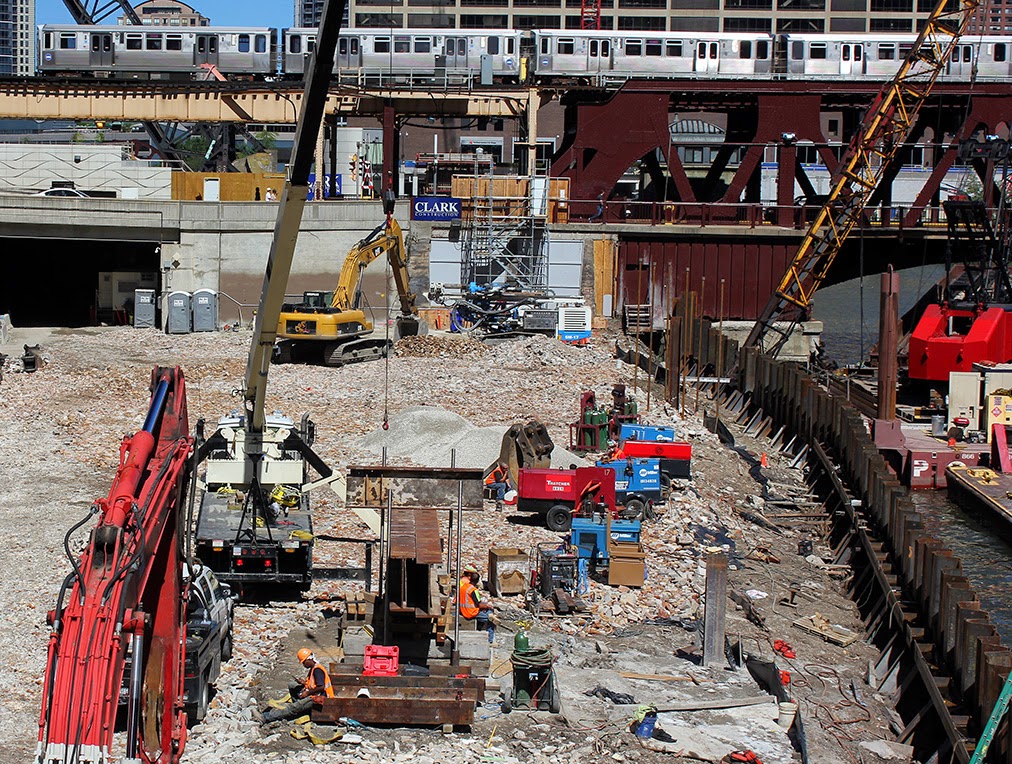 Like River Point, 150 North is also to be set within a 1.5 acre park, also covering the Metra tracks, but the key difference is this time the city didn't get stuck with the bill - the developer is picking up the costs.
A new river edge has been put into place to protect the site during construction, and while there's barges (I suspect that at the time of its commercial zenith many decades  ago, the entire Chicago River was of this kind of green sludgy consistency). . . 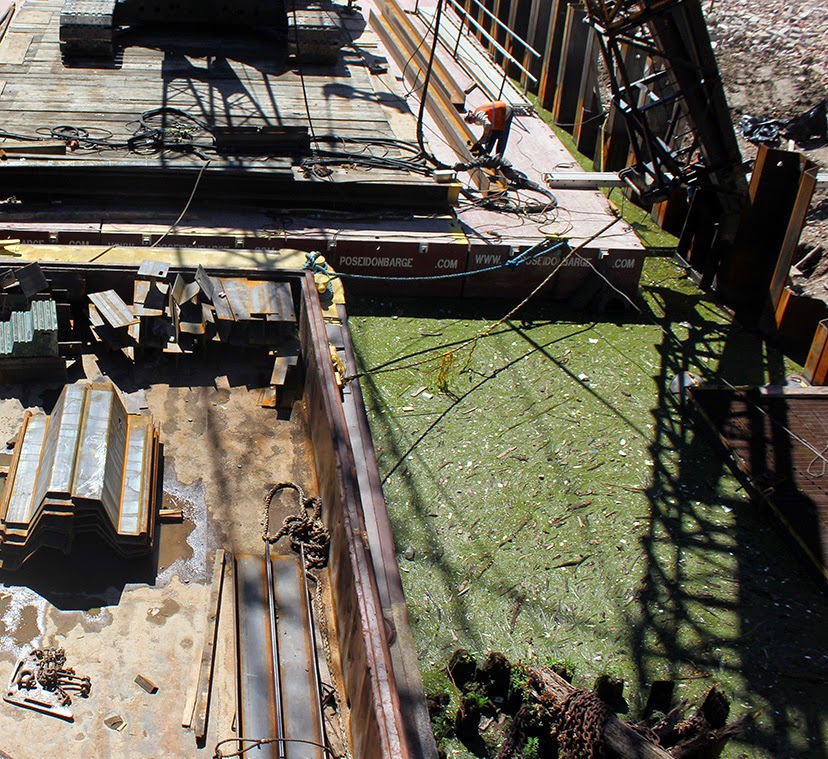 . . .  but the main activity on Saturday was a power shovel slowly spreading a carpet of rubble across the entire surface of the site. 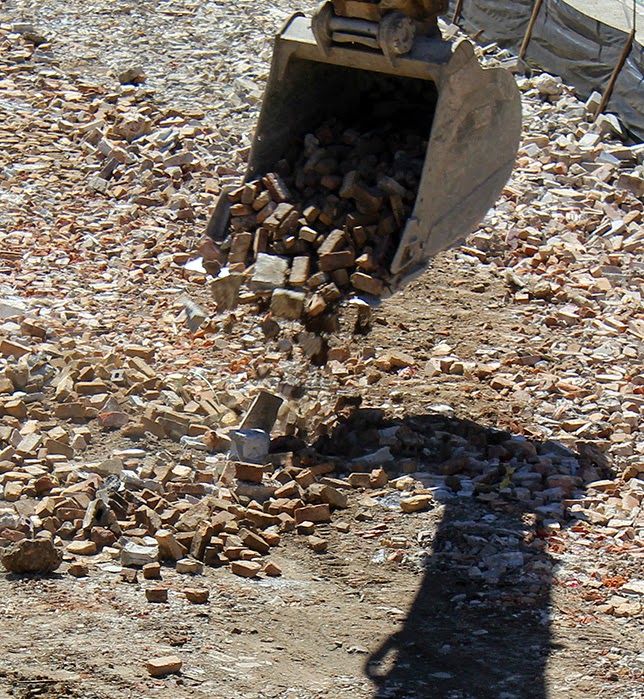 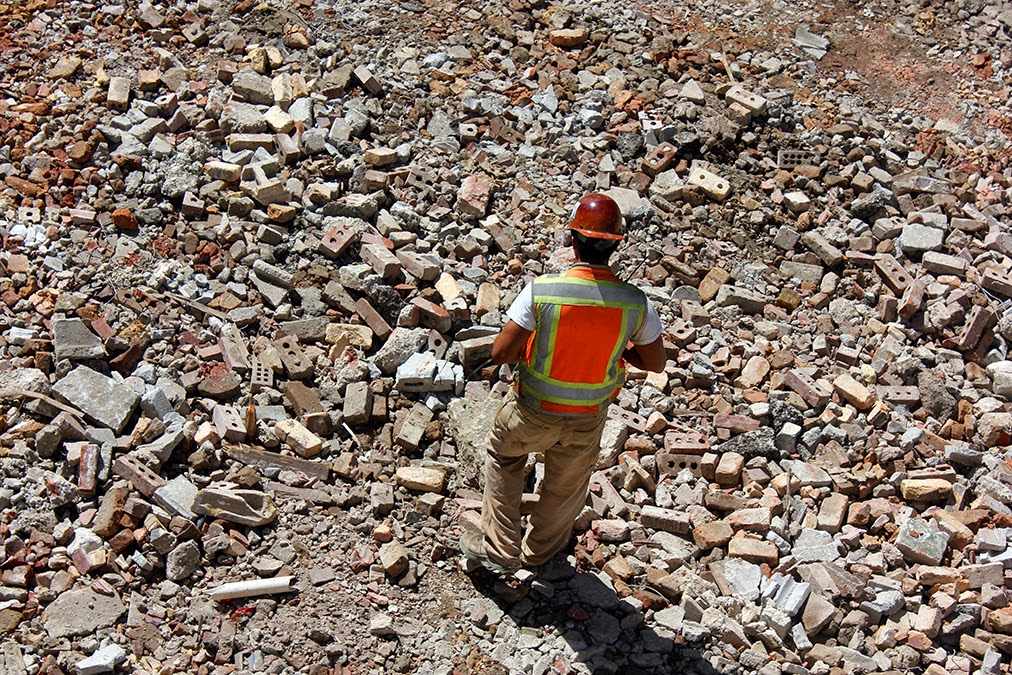 So that's it for now.  It's like what Groucho said in Animal Crackers . . .


We took some pictures of the native girls, but they weren't developed.  But we're going back again in a couple of weeks 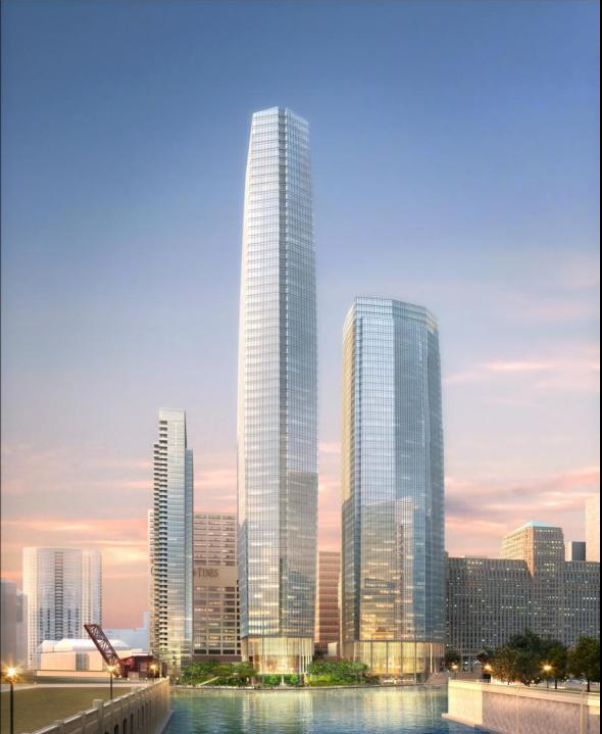 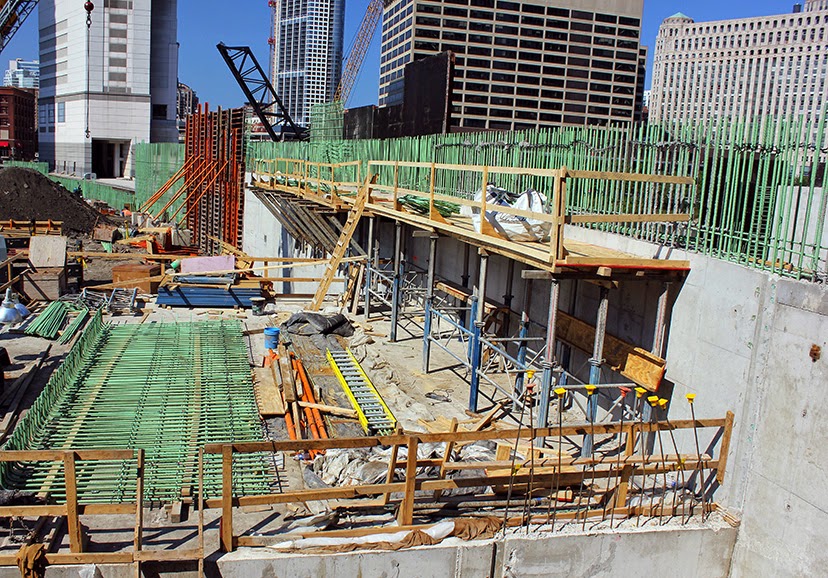 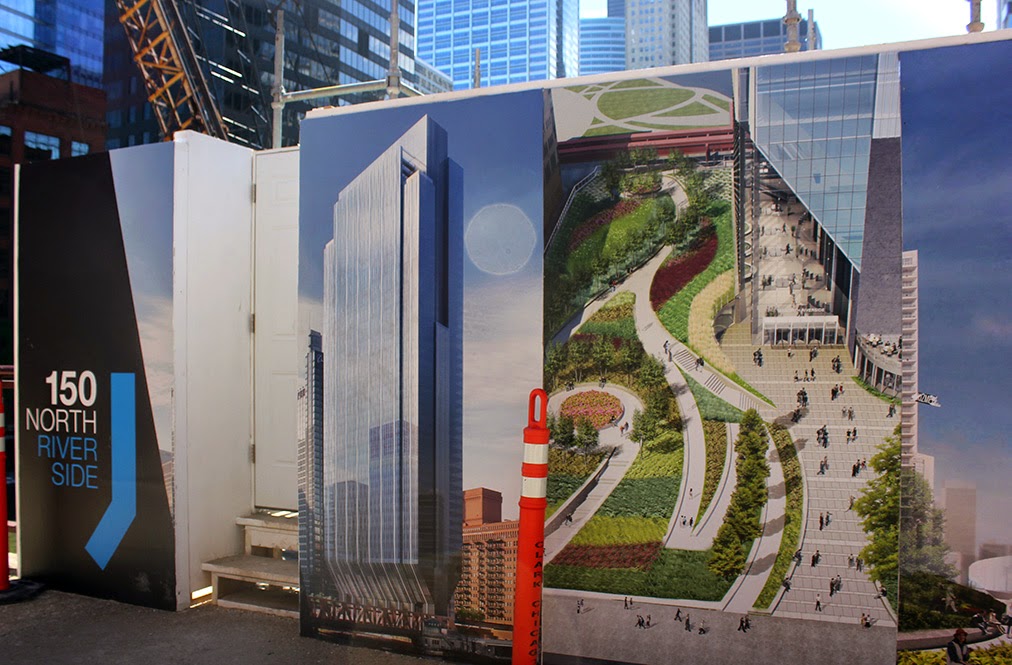 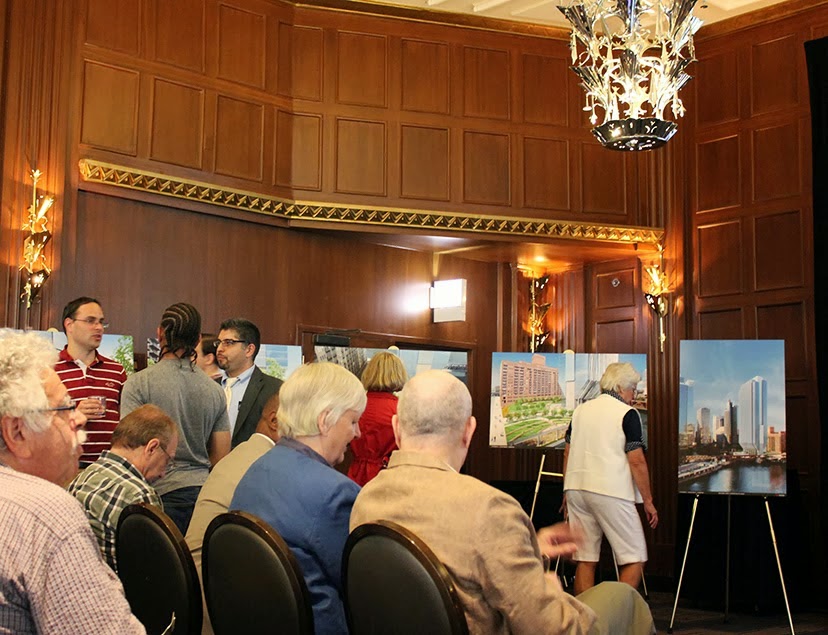 The Art of the Pitch: Selling 150 North Riverside to the Neighbors

Thank you for thiss