Luftwerk's Film Noir Redemption in Couch Alley - only through Saturday


Flow/IM Fluss continues in Couch Place from 5:00 p.m. to midnight through Saturday, September 20th.  The weather project for Friday, warm and rainless, looks to be especially perfect.

When you think of the black-and-white photography of the great film noir thrillers of the 1940's and 50's, you think of the striking interaction of shadows and fog, and of night pierced by dramatic shafts of light.  It's a prototypical expression of the city and its snares, the allure and danger of the only partially seen. 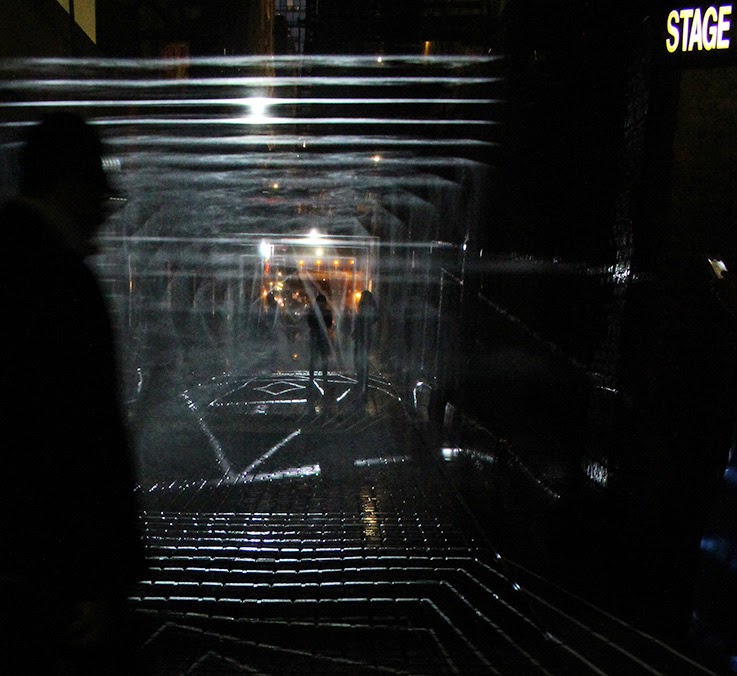 The passageway bridging State and Dearborn midblock between Lake and Randolph is called Couch Place.  In Old Chicago, it was a street, the southern boundary of the Tremont House, one of the city's early high-end hotels.  Long ago, however, it became nothing more than a narrow alley, a place where deliveries were made, garbage was kept to be picked up, and rats scurried across the pavement, unseen but heard.  The fine facades along Randolph Street may have been of gleaming terra cotta, but at the stage door end of the building, it was plain, homely alley brick, often with cheap paint flaking off of its surface.  The bright marquees out front spoke to our hopes and illusions, the claustrophobic, menacing alleys to our fears and darker realities.  It was kind of place you could imagine Elisha Cook, Jr. skulking in a doorframe, or Humphrey Bogart emerging rubbing his head after being hit from behind by someone who thought he was getting too close to the truth. 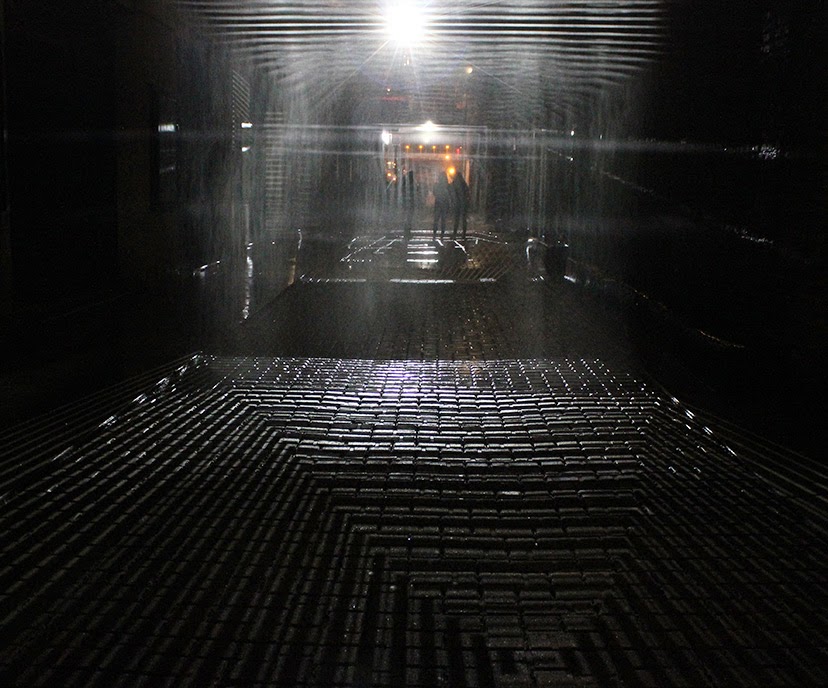 And then they went and cleaned it up. As a part of the attempt to revive Chicago's theater district, Couch Place was gussied up in 2007.  The dumpsters went away, new paving installed, and vintage posters mounted evoking the days when the alley held the stage doors to movie palaces such as the Oriental and State-Lake.  The tall neon sign for the new Goodman theater lined up as the alley's visual terminus to the west. 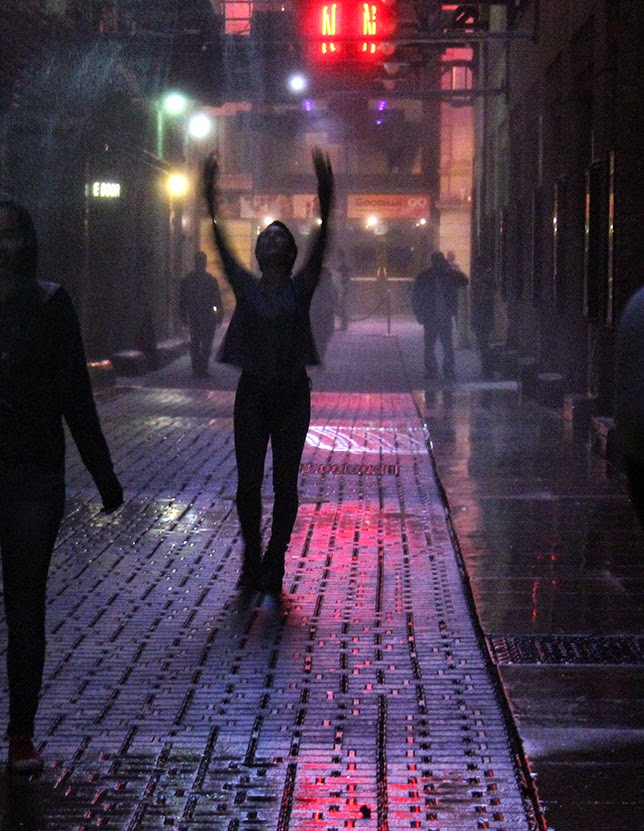 Even with all that, Couch Place remains very sparsely traveled.  Thursday night, however, it was wall-to-wall people, as it was premiere of FLOW/Im Fluss, a new light and water installation by Luftwerk, a/k/a artists Petra Bachmeier and Sean Gallero, creators of such striking temporary artworks as Luminous Field at Cloud Gate, and this past winter's Spring Light for the Chinese New Year, at the Chicago Cultural Center and McCormick skating rink at Millennium Park.  In October, the pair will mount INsite, lighting up Mies van der Rohe's iconic Farnsworth house.

Flow/Im Fluss celebrates the 20th anniversary of Chicago and Hamburg being named as Sister Cities.


Inspired by the element of water and its all-encompassing connectivity, Luftwerk’s FLOW/Im Fluss visualizes the characteristics of the Chicago River and Hamburg’s River Elbe through video compositions projected on water screens. 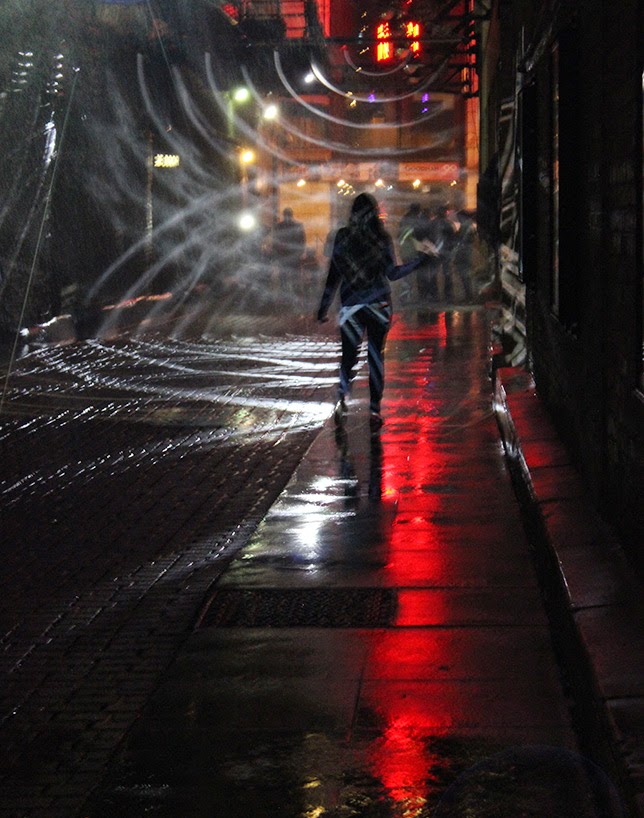 
The event, which also includes music, is sponsored by the Goethe Institut and Chicago Loop Alliance, as part of its sequence of events Activating spaces in the Loop with temporary art installations. 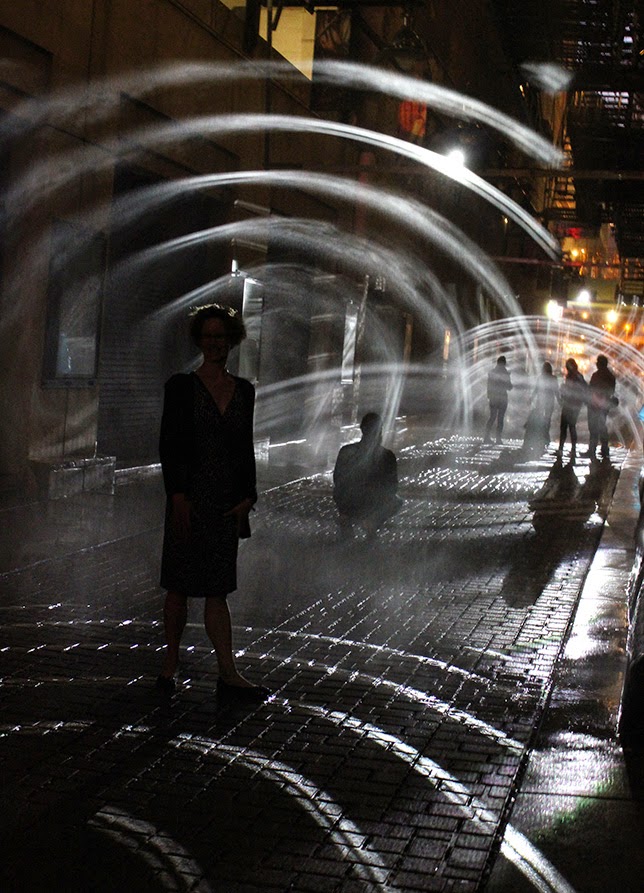 The best way to experience Flow/Im Fluss is to walk through it, from State to Dearborn and back. Step into the lines and swirls of light piercing the darkness, and walk through the fine mist that both provides the screen for the projected geometric forms and imparts to you as a visitor an almost baptismal cleansing of the dirt and squalor of the “dark alley”  of the soul.