It was only this past July when we wrote of the quick demolition of the 1903 Division Street bridge over the North Branch Channel at the eastern edge of Goose Island.  Within a few short weeks, nary a trace of the structure remained.
Now it's temporary replacement is being put in place just north of where the old bridge stood, with completion scheduled for next month.  $6 million was budgeted both for the demolition and the temporary span. 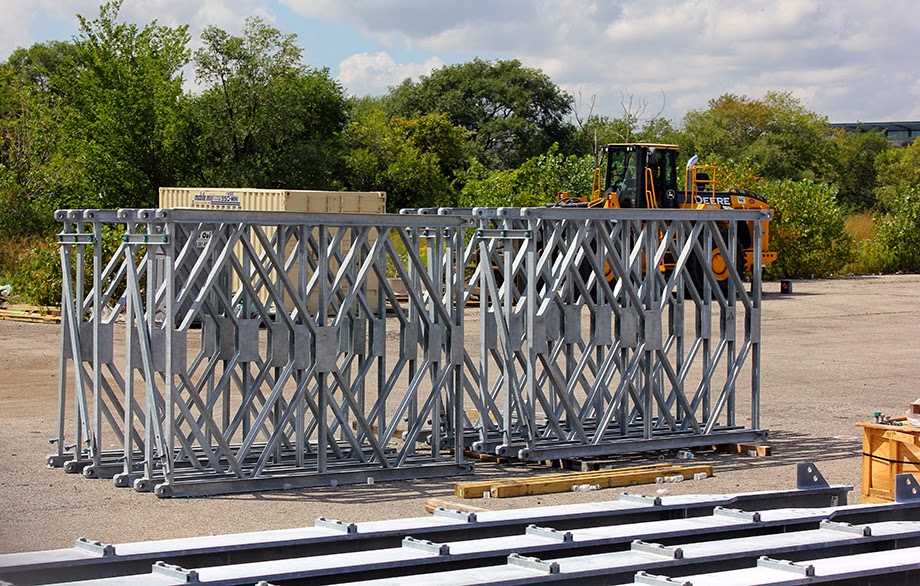 The provisional structure is a Bailey Bridge, named after its inventor, Donald Bailey.  An employee of the British War Office during World War II, Bailey liked to create model bridges as hobby, but the design he created for a bridge constructed out of lightweight, precision-made modular steel components was anything but a toy. 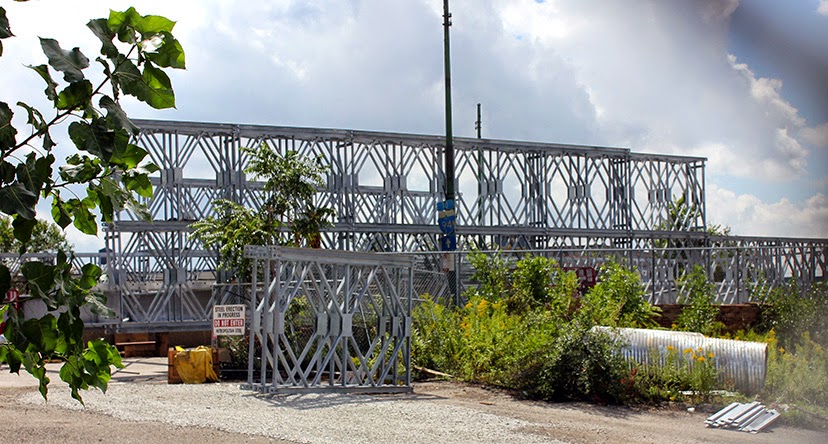 The pieces could be transported on ordinary trucks, and assembled by hand into ten foot-long 5 foot-high cross-braced rectangles that weighed only 570 pounds and could be lifted into place by six, probably burly men.  No heavy-duty construction equipment was required, yet the bridges were strong enough to carry a convoy of tanks.  The Bailey Bridge became the western allies' standard military bridge.  Over 2,000 were constructed, with 700,000 Bailey panels providing 350 miles of bridging.  Field Marshall Montgomery credited the Baily Bridges with helping speed the path to victory by creating the ability to quickly construct crossings that sustained an aggressive forward movement of troops and supplies.  Bailey Bridges remain in use today throughout the world, with the longest spanning 2,585 feet, and the highest rising over 18,000 feet above sea level. 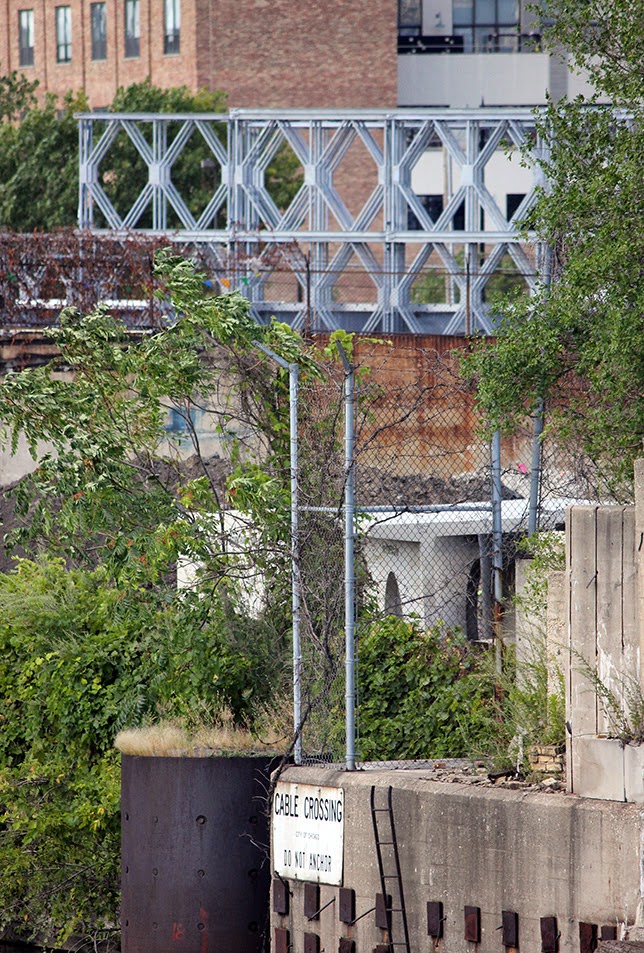 Nothing quite so spectacular is at play at Division Street.  The standard roadway width of a Bailey Bridge is 12 feet, and the temporary bridge at Division Street will consist of two twelve-foot vehicular lanes, and another pair of roadbeds split between a 6-foot-wide bike lane and 5-foot wide sidewalk.  Skipping over three spans, the interim bridge will be 261 feet long, and will remain in place until the anticipated completion of the permanent replacement directly in line with Division Street in December of 2017. New concrete moorings have already been put in place on the western embankment . . . 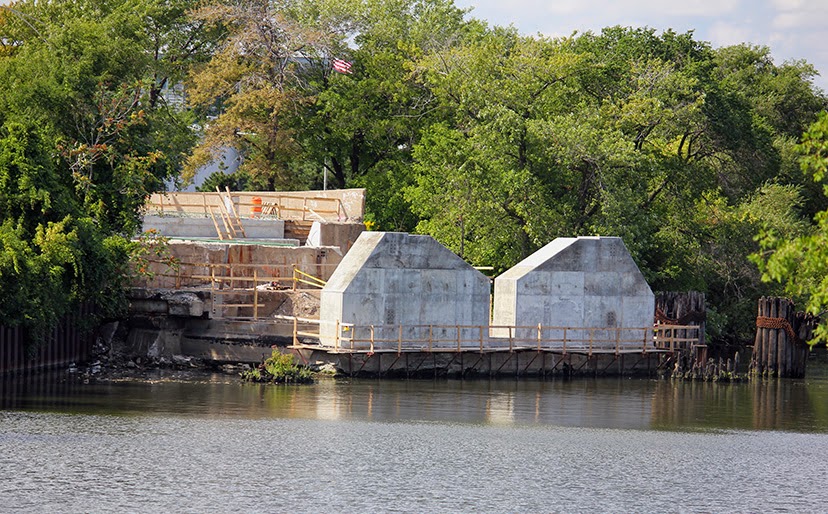 . . . soon to support Bailey's tinkertoys as they begin to creep across the English North Branch Channel. 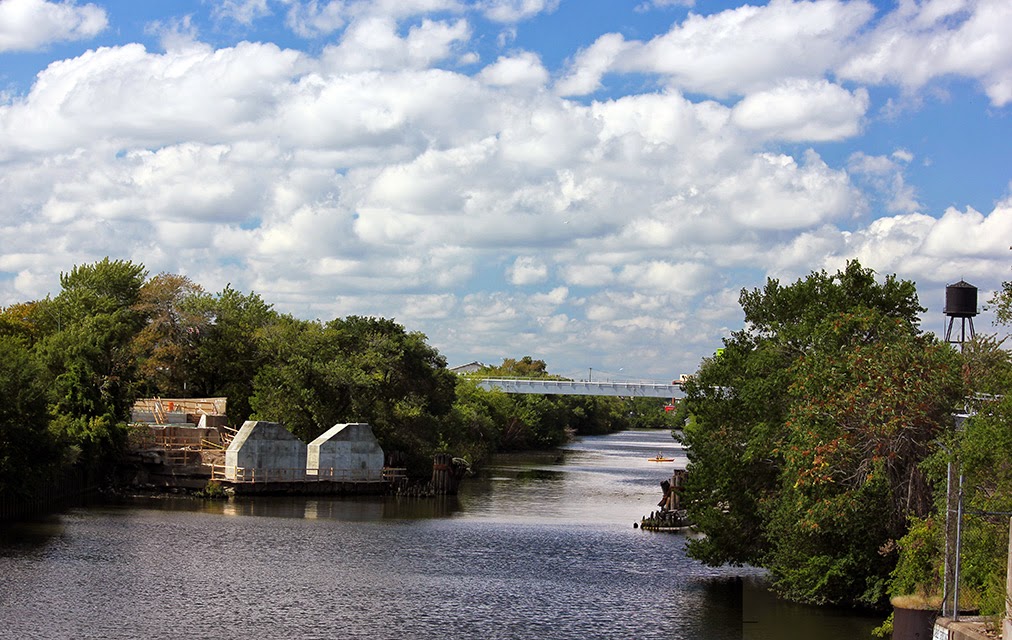 With commercial traffic on the river a tiny sliver of what it was when it functioned as a major industrial thruway, the new bridges at Division Street are part of a continuing city initiative to replace Chicago's historic bascule bridges, whose spans can be raised to accommodate tall vessels, with fixed span tied-arch bridges.  The 1909 Halsted Street bascule bridge, less than a block south of Division, was already replaced with one of the fixed span prototypes in 2011. 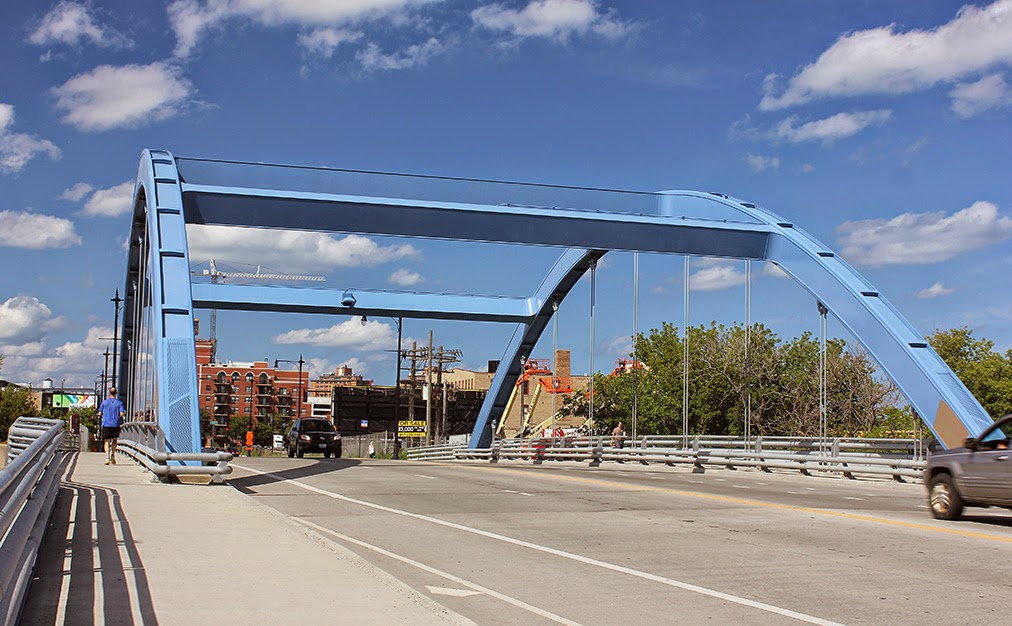 The new Division Street bridge looks remarkably similar, but in red rather than blue.

Can we put a little more design into our new bridges? yuck. Won't be photographing this one anytime soon.

Also -- the red bridge rendering you posted is of a bridge design for where DAMEN Ave crosses the river. It's not related to these two Goose Island bridges as far as I know.