Flip City is a story about how a city and the architecture that defines it evolve over time.  The more I explore, the more epic it becomes, so I'm breaking it into multiple chapters to explore more aspects of the theme, and make the whole thing manageable, both for myself and for you as a reader.

For all but the youngest of us, the story of the neighborhood north of Chicago and east of Goose Island is one of the rise and fall and death of Cabrini-Green, the massive and increasingly troubled public housing complex that dominated the area for decades. 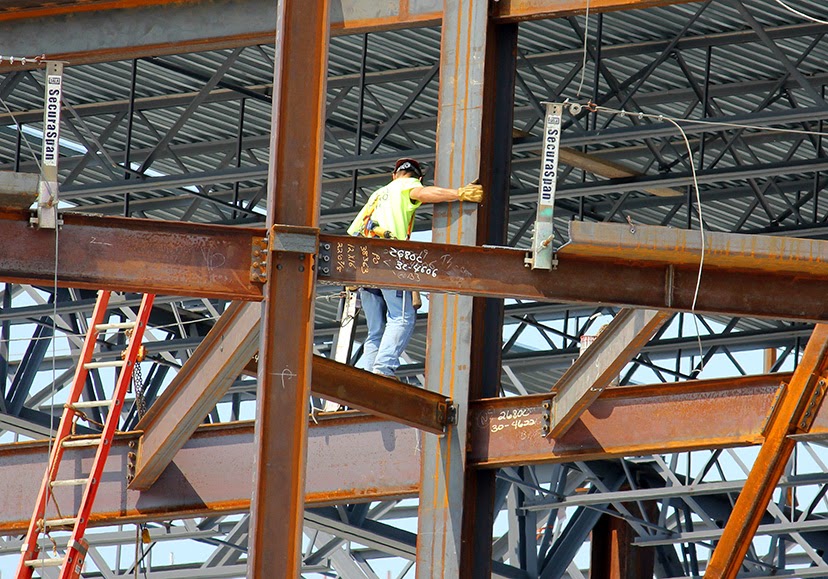 It's latest chapter is one of gentrification, personified in the massive New City shopping center now rising at Clybourn and Halsted.  Yet in, in fact, the story is far larger and much longer, one almost as old as Chicago itself, beginning with the first settlements on open land and how they became a dense ghetto, a close-knit community of first generation Chicago immigrants and the institutions that served them.

In other areas of the city, important remnants of that immigrant history remains.  The old buildings may have completely new uses, but they endure.  At Cabrini-Green, however, there are no surviving markets, no theaters, or settlement houses.  All that remains is a handful of old churches, and one of them, St. Dominics, is about to meet its end. 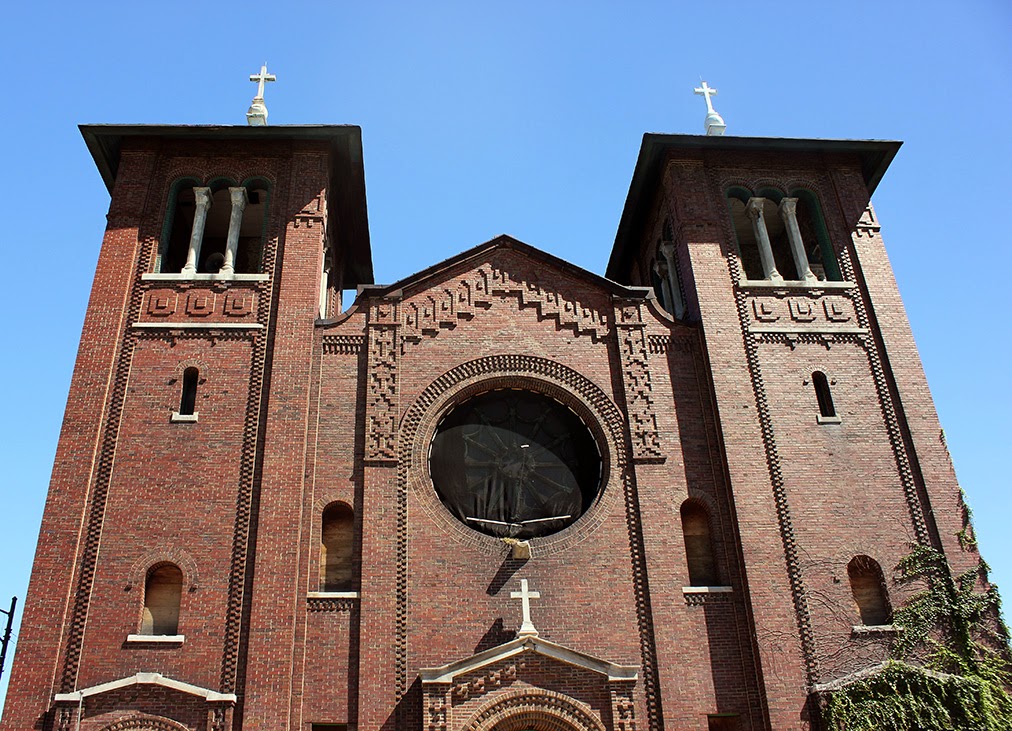 According to a story by architecture critic Lee Bey, the church was consecrated in 1905, designed by architect William J. Brinkmann at a cost of $60,000.  It was built to hold 1,000 worshippers, something it had little trouble doing in its early decades, when the area around it was a dense slum of Swedish, Irish and, predominantly, Italian laborers.  Is was so tough a neighborhood, it was actually referred to as Hell. 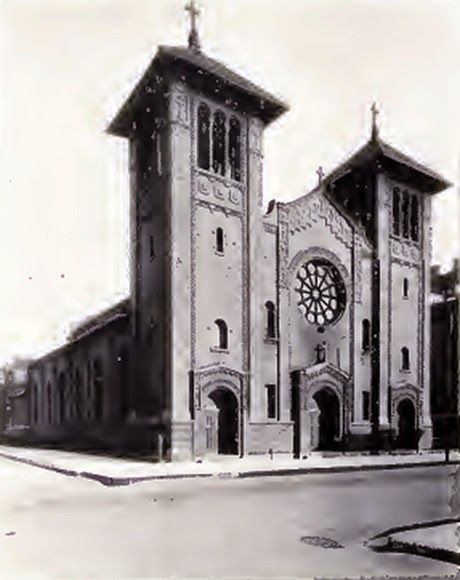 St. Dominic's Church, located at the corner of Locust and Sedgewick Streets, was founded by the Reverend E.M. Griffin in 1905.  The style of architect of this fine church is a pleasing combination of Roman and Gothic.  The parish being located in a large manufacturing district, the congregation is composed almost entirely of Italians.  The 400 children who attend the school are taught by the Sisters of Charity of the B.V.M . . .  Illustrated Souvenir of the Archdiocese of Chicago, 1916

Beginning in the 1942, the slums became the object of “urban renewal.”  The old buildings were demolished in favor of public housing. 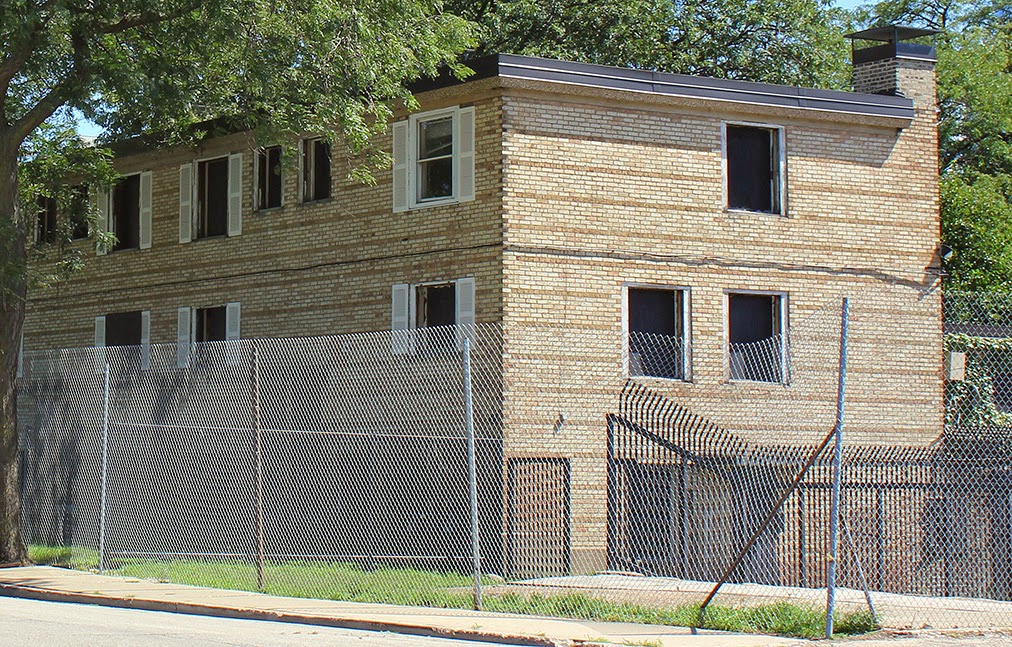 At first it was the low-rise row houses of the original Frances Cabrini homes.  They still remain, behind chain link fencing, on borrowed time.  Then in the 1950's came the now infamous high-rises, over 10,000 people herded into a succession of towers that began in optimism and devolved into gang infestation, crime and endemic violence.

For the bureaucrats, it was far more difficult to pursue actual solutions than simply blame the architecture. The Chicago Housing Authority initiated a Plan for Transformation whose primary impetus was to make neighborhoods close to downtown safe for gentrification, cleansing the area of the poor, collecting subsidies from the feds for units kept vacant, and accumulating hundreds of millions of dollars in reserves, even as the waiting lists for public housing grew.

Today, huge swaths of empty land remain the primary legacy of the CHA's “transformation.”  Once seven to ten story CHA high-rises were right across the street from St. Dominic's.  Now there's only empty lots.  St. Dominic's was closed in 1990, and since then the building has been used to store items received from local or closed parishes.  The photograph below is from the bulletin of St. Joseph's Church, on Orleans near Division.  In it, Father Lawrence Lisowski writes . . . 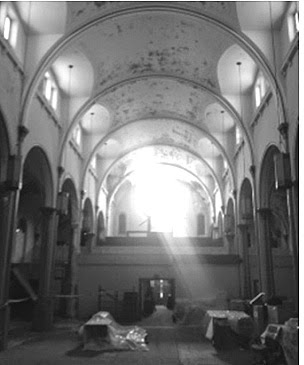 When I stepped into the dusty and musty church, it felt like I wa stepping back into a sacred time and place, like walking into an ancient ruin in Rome.  .  .

St. Dominic's has now been sold and the site rezoned.  The old church will be razed for a new seven-story, 40-unit condo building designed by Axios Architects for Conlon and Company, scheduled for completion in 2016. 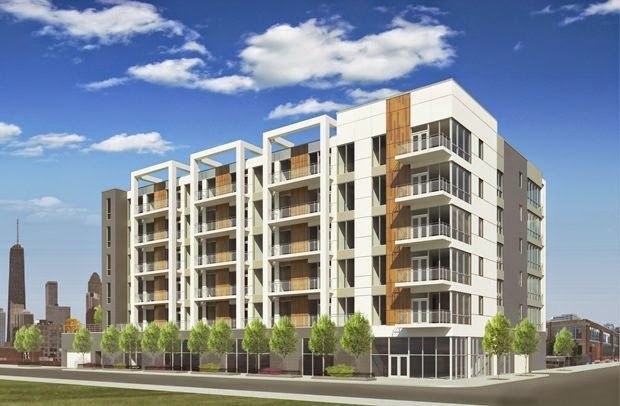 Not everything can be saved, and truth be told, despite the craftsmanship of its brickwork,  St Dominic's is a rather heavy design.  I've previously argued against the demolition of churches that represented a continuity of community.  In the case of St. Dominic's, however, that continuity has long since been yanked out from under it; the community that once surrounded it smashed to bits, force-depopulated, and replaced by featureless lawns that deny it ever existed.

There's a new Target on Division where Cabrini Green once stood.  A new apartment tower is now rising right across the street.  If everything goes as planned, the new condo building where St. Dominic's now stands will form the foundations of a next chapter.  New development may well eventually fill in all those empty lots, but that new city will be an engineered tabula rasa, expunged of history. 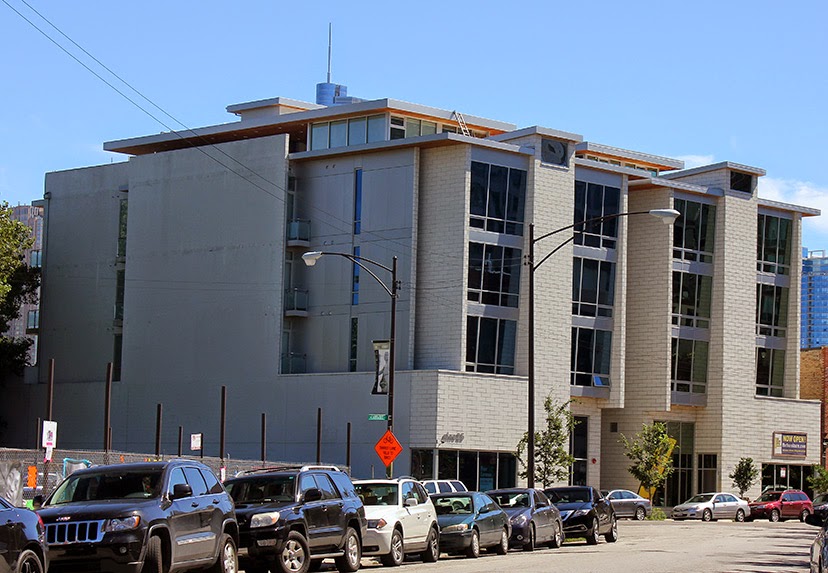 This building is on Larrabee, just a few blocks from St. Dominic's, with half-million dollar condos and a $6,000 a month penthouse.  Anonymous and dispiriting, will this be the face of the new Hell?  Are buildings like this one and the one that will replace St. Dominic's our new tenements, housing not the working poor, but the upwardly mobile?  With our lives growing increasingly inward and virtual,  will the new landscape be devoid of the kind of architectural expressions of larger community that St. Dominic's represented? 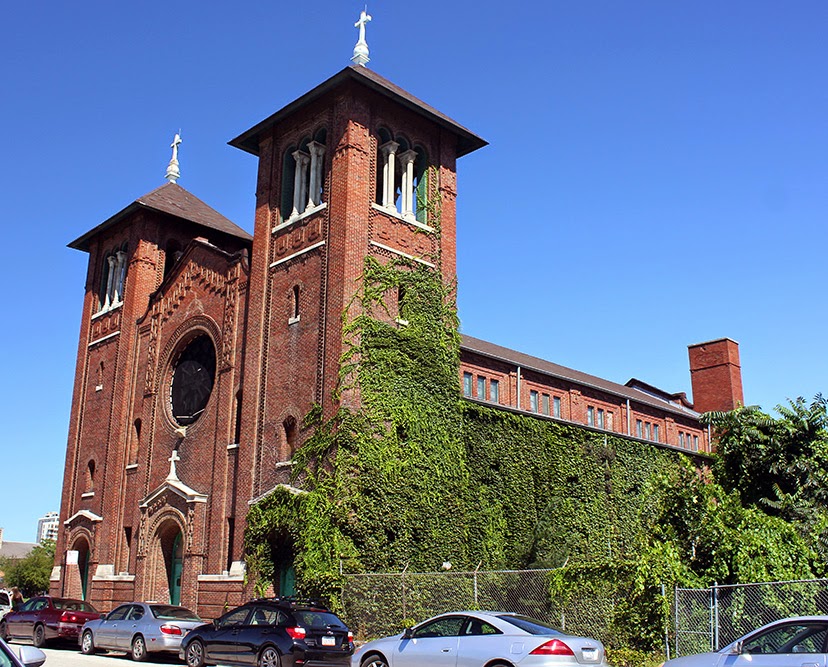 One idea of an alternative mediation will be the subject of our next post in this series.

Do you still do your Calendar? If you do, it is impossible to find! The last I can see are a few years old.

Nooo!!! Chicago is as great as it is because of it's history and historic buildings - including this beautiful church! Can't we save it?? Isn't it a historic landmark?? Can't the church be converted into something else? To lose this beautiful building will bring Chicago one step closer to being a soulless wasteland of generic box buildings. I may as well live in a city like Phoenix...