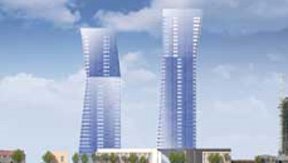 Reporter Laura Putre and the neighborhood newspaper Chicago Journal scored a scoop last week in publishing early renderings of a proposed development to be designed by Lucien Lagrange south of the Loop. The project, dubbed 1712 S. Prairie by its developer Keith Giles, would consist of two towers, one 33 stories tall, the other 45, offset above a shared podium.

Lagrange has made his mark as Chicago's architect to the affluent, creating a series of backward-looking projects like 65 E. Goethe and the truly execrable Elysian Hotel & Residences, a sixty-story mishmash where "The style incorporates both Second Empire and Art Deco motifs . . . ," including a carriage courtyard so retrograde in design it will let the projects monied residents imagine they've just crushed the Commune. Such projects reinvite Ruskin's judgement of "an architecture in which intellect is idle, invention impossible, but in which all luxury is gratified, and all insolence fortified."

Every so often, however, Lagrange is hired by a developer who sees architecture as something more than a masked ball, and his office comes up with something like the now stalled concrete and glass tower that was to built behind Michigan Avenue's Fourth Presbyterian Church, or a true masterwork of recent Chicago architecture, Erie on the Park, done for developer William Smith's Smithfield Properties.

1712 S. Prairie is in the same mold, although perhaps not in the same league. Next to the innovative and visually striking molded terraces of Jeanne Gang's new Aqua tower, the way Lagrange expands or contracts his terraces to have the profile of his buildings appear to "tilt" outward like outstretched palms seems a little too linear and foursquare. Still, I'll take it over the Pinnacle any day.

The Chicago Journal article also includes a good overview of the battle that may be shaping up as to whether the project is appropriate for its historic Prairie Avenue district. One group, Prairie District Townhomes, is opposed, while proponents include both the Great South Loop Association, and the Glessner House Museum, which, coincidentally or not, has just received a commitment from the developer for a $600,000 gift.

The buy off taking place on this project is unreal. Other neighborhood associations are just finding out about this project and do not want it as well. The poor history of quality by Giles as a developer preceeds him.

It's funny how someone without any architectural expertise moves to the city or a neighborhood and then speaks out about height and style.

Moving to the Loop does not make you an expert in architecture or art.

If you move to Chicago expect height and style.

If you don't like it move to the southside and live in a bungalo.

This goes the same for alderman eager to maintain votes rallying residents to cry foul about new buildings as if they were authorites. Once again just because you mortgaged a condo with a balcony does not make you an expert.

There is always someone with a loud mouth wasting our time giving us there opinion on how Chicgo should be although they just moved here from another state or neighborhood or suburb far from the Loop.

Either live here and let the city grow or move out.

This is what a city is, loud tall big beautiful and different. Don't allow the city to be stunted by voices that shouldn't speak about these matters in the first place.

Sorry about the typos, my editor was busy wasting his time reading letters from oppostion and being amused by their notion of authority.

I think the buildings are great and want to see them built.

So let's get this straight:

- A duly elected alderman
- The thousands of voters who elected him, ousting an alderman who was in the developers' back pocket
- Long-term residents in community groups
- Property owners in the community

wake up, buddy, and find a good self-help group to liberate you from your addiction to overbuilding. Chicago is not just skyscrapers - at least 70% of the city's residents happen to live in the kind of communities, complete with bungalows, that you despise.
You, my friend - and to a certain extent myself (I live in Marina City) - are the freaks, not them. Look around you. You're already getting your way 98% of the time, although you represent a minority of Chicago's population and electorate. Stop bitching and accept democracy - if it's good enough for Iraq, why not for us?