The architect formerly known as Ramus splits from Rem Koolhaas 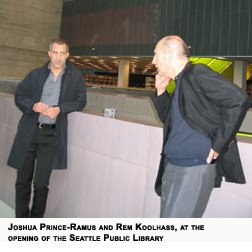 It was not through his tutelage as a partner to Rem Koolhaas, but by marriage that architect Joshua Ramus became a Prince. (He added his wife's last name to his own when he was married two years ago.) Now, according to a report yesterday in the Dallas Morning News and an extended story in Sunday's New York Times, Prince-Ramus has flown the Koolhaas coop, taking AMO, the sister American firm to Koolhaas's OMA, and its 35 architects with him. Prince-Ramus was a key player in the design of the very favorably received Seattle Public Library, and his new firm, Ramus Elia Architects will bring AMO's current projects, including the Wyly Theater in Dallas, and the recently announced Museum Plaza megaproject in Louisville, to conclusion. Ramus Elia Architects has announced it will be represented by the acronym REX, taking Ramus from Prince to King in a single stroke. 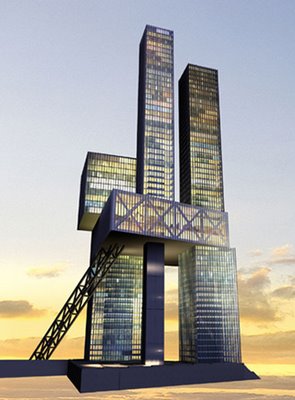 the genuine Koolhaas stamp while at the same time professing a high level of comfort with Prince-Ramus. Issues of authorship are often a puzzle. Was Charnley House a work of Louis Sullivan or of his head draftsman, Frank Lloyd Wright? Sullivan may have harbored a bit of jealousy towards his wildly talented prodigy, summarily dismissing him when he discovered Wright was taking on outside projects.

It doesn't work that way today. "The issue becomes, how should the work be credited?" Times reporter Robin Pogrebin quotes Koolhaas as saying. "On his part there is interest in sole credit for the work because he is sole author of the work. My interest is to clarify, so we don't get a blur between what is the work of Joshua Ramus and what is the work of O.M.A."

In that light, it will be interesting to be see, if Koolhaas continues to pursue U.S. projects, how different they will look from those on which Prince-Ramus was the key U.S. partner, or, on the other hand, what new commisions from REX be like now that they're free of the Koolhaasian yoke.

I haven't waded through the NYT article yet, but isn't AMO the "graphic design" component of OMA, not necessarily the American sister of it. AMO is the component that developed the EU bar-code flag as well as Content, Volume and other print material. It's more of an extension of the architecture/urban planning entity into other realms, responding to Rem's take on architecture needing to redefine itself today.

This departure story sounds like Ken Shuttleworth's departure from Foster's office. And I seem to recall a designer under Zaha Hadid getting credit for some project out of her office.

You are, of course, quite correct in stating that AMO is not the American branch of OMA, but, as in one description."concerned with research will collect forces from media, finance, technology, and art to consult in the architectural thinking where strategy and concept have a higher importance than realisation. The AMO will analyse the relationship between built structures, human behaviour, commerce and culture." It is the New York office of OMA that is transforming into REX.