Burnham, Root and the man "responsible for the modern office building"

While all but a handful of his large commercial projects have been wantonly destroyed, a number of houses and smaller commissions designed by John Wellborn Root during his partnership with Daniel Burnham still survive. We'll be covering them in this and future posts. One of the most interesting is the William E. Hale at 4545 South Drexel Boulevard, completed in 1886. 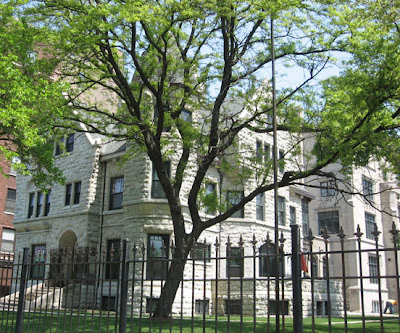 It was designed for William E. Hale, who Louis Sullivan lauded in 1916 as one of two men "who are responsible for the modern office building." (The other was developer Owen Aldis.) In 1869, Hale patented the "Hale Water Balance Elevator", replacing the less reliable propulsion by steam with water hydraulics. Contractor Henry Ericsson speculated that a reference to "Passenger Elevator, $5,000" in a memo book of architect John Van Osdel, regarding an 1867 remodeling of the Tremont House, may have been the first known reference to "passenger elevator." (The Tremont House, then Chicago's premiere hotel, was at the corner of Dearborn and Lake, on a site that's housed two successive multi-story parking garages over the last several decades.) Hale's inventions were manufactured by Otis 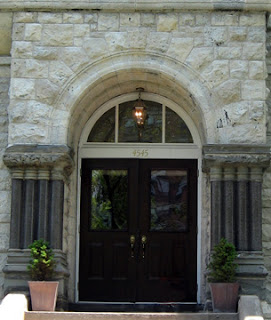 Elevator, where, as a key manager, he helped transform that enterprise into a powerful corporation.

But the house's greatest claim to fame may how it fueled the career of his son, George Ellery Hale, who revealed an early interest - and aptitude - for astronomy. It was at the Drexel Boulevard house that the younger Hale began his experiments, building a 4" refractor telescope on its roof. While still a student at MIT, Hale invented the spectroheliograph, which was able to record solar eruptions not just during rare solar eclipses, but in broad daylight. After graduation, Hale returned to Drexel Boulevard, where his father built Kenwood Observatory for him, complete with a spectroheliograph with a 12 inch lens, right in the house's back yard.

Even more remarkable is George Ellery Hale's relationship with Chicago traction magnate Charles T. Yerkes, who made his fortune wallowing through - and mastering - the city's notoriously corrupt politics to create a public transit monopoly. An outcast from the city's business elite with no discernible interest in science, Yerkes was persuaded by Hale to bankroll what would come to named, for reasons I'm sure you'll understand, the Yerkes Observatory, built by the University of Chicago in Williams Bay, Wisconsin, and completed in 1897. The observatory, featured in 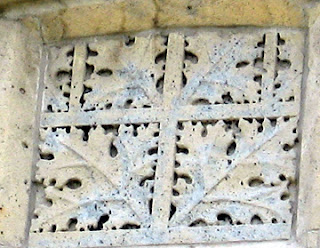 As for the Drexel Boulevard mansion, it looks beautiful on the outside, but it's been carved up into the twenty units of the "Observatory Condominiums and Lofts."

George Ellery Hale was not just the moving spirit behind the Yerkes Observatory. He was also essentially the founder of the California Institute of Technology, with its Mt. Wilson and Palomar observatories and their much more important telescopes.

according to the AIA Guide to Chicago
the school house was added in 1925, architect, E. Norman Brydges.

Thanks very much for that information, Lynn.

In San Antonio there is an 1893 Richardsonian Romanesque with more than a passing resemblance to this house that also includes an observatory. Built for the pioneer Maverick family and still owned by the Carter family, the house has been meticulously restored, including the observatory. http://maverickcarterhouse.org/

It was a school I actually lived there in the 70s b4 they destroyed it in to condos. Such amazing rooms I remember to this day

I lived at St George School for Girls in 1948. It was the most wonderful place to be.
Mrs Tyskling, the Headmistress became my Godmother. It was not a Catholic School but most of the girls who lived there Catholic at that time.