A New Dana every Century

A rendering was released last week of still another new Chicago hotel, this one in River North at State and Erie. The dana hotel and spa (having committed $60 million to the project, Neighborhood Development

Corporation and Gold Coast Hotels, Inc. apparently didn't have any money left over for capital letters in the name) is being constructed on the site of an another Hotel Dana - opened in 1891 as the Erie Hotel, which was demolished, despite the efforts of local preservationists, to make way for the new, much larger structure.

An extensive press release says the developers "initially considered the former Dana Hotel . . . as a historical renovation project, a specialty of Neighborhood Development Corporation," but - surprise, surprise - "Ultimately, it was deemed structurally and economically unfeasible for preservation." Emphasis on economics. Hotel Dana was five and a half stories. dana hotel will be 26 stories and have 216 rooms, "competitively priced" beginning at $350 a night, which probably would have bought an entire week or more lodgings at the old place. 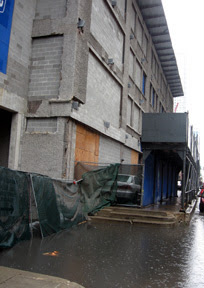 The new dana is the work of the Chicago firm of Eckenhoff Saunders Architects, who are also architects of the new Southgate Market along the booming new Roosevelt Road retail strip, as well as the ill-fated Museum of Broadcast Communications, further down on State, which has remained unfinished for over a 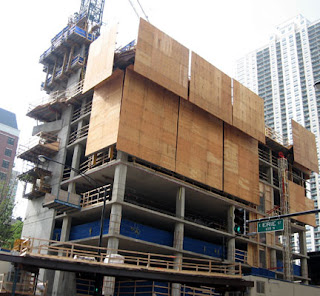 year after funding for the project ran out last spring.

Architect Walter Eckerhoff is quoted as calling the new dana "an exercise in simplicity." It's a simplicity in the Miesian carriage trade style, with an aluminum and glass facade, and a ground floor offering "an undulating timber wall" and "two-story fireplace." The design of the spa will include bamboo bricks and recycled glass terrazzo flooring. Guest rooms will match exposed concrete ceilings to walnut wood floors. Registration and lobby will be located on the second floor to allow , in the words of the press release, "the ground floor to give back to the neighborhood and serve a more public function." The sleek design looks to be a positive addition to River North, but currently it's probably most noted for the vast expanses of plywood being deployed in its construction.

The 1891 Dana, while not quite so posh, was pretty neat for its day. According to a 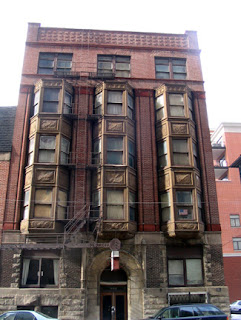 first-rate history on the Preservation Chicago website, it was designed by Normand S. Patton and Reynolds Fisher, who also designed the original Armour Institute building on the IIT campus, and the Chicago Academy of Sciences, now converted to a park district admin building, at Clark and Armitage. Opened as the Erie Hotel, the Dana combined Queen Anne stylings with Romanesque details, with three projecting metal and decorative pressed brick bays centering the composition.

The press release announcing the new hotel tells us 'dana' means "the pleasure of giving" in Sanskrit, a factoid of which the architects of 1891's Hotel Erie, as well as the proprietors who renamed it the Dana, most probably went to their graves blissfully ignorant. Still, you'd likely be getting a lot of pleasure, too, if every room night booked got you $350.00 and up a pop.

In case you wanted to see the process.