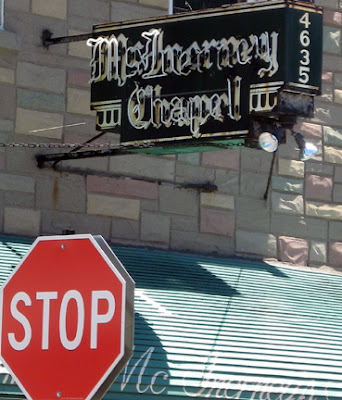 An Urban Legend Revisited - earlier this week, the Chicago Inter Ocean ran a disturbing story about a young Chicagoan who picked up an attractive brunette at a hotel bar, got very drunk, and wound up taking her to a room upstairs for the night. The next morning, he awoke, naked and groggy, in the room's bathtub, soaking in freezing water infused with his own blood, his head, save for openings for his eyes and mouth, packed tightly in ice.

His cell phone had been placed on the ledge of the tub, and on the mirror, a note was taped, written in lipstick, that read, in large letters, "Call 911!" Trembling with cold and with dread, he placed the call and related what he knew of his predicament to the operator. She asked him to very slowly reach up to feel his face, and when he did, he found two tubes, one attached just below each cheekbone. The operator fell silent, and then told him to remain very still. She said that she was sending help, but refused to answer the man's increasingly desperate questions.

Soon the paramedics arrived. One of them, a young woman with sad eyes who spoke in a Danish accent, leaned down beside the tub and whispered, seemingly at the point of tears, into the man's ear: "Listen carefully. You've been drugged, and they've taken your adenoids."

As the man was being placed on a stretcher for transport to the emergency room, a Chicago police investigator who had arrived on scene told him that not only was the woman he had picked up a known psychopath; she was notorious for being an extremely poor judge of the current black market value of various body parts.