Wit on the Rise?

A year after its originally announced groundbreaking date, and after a year before 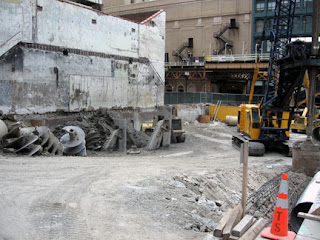 that as an open, gaping pit, there's finally signs of actual construction on the site at northeast corner of State and Lake that's slated to become home to the Wit, a 26-story, 238 room hotel scheduled to be completed in 2009. Crain's Chicago Business reported in June that financing had been finalized for the $100 million project, from ECD Company, which is also building another hotel, the Aloft Millennium Park, at Balbo and Wabash, actually about six blocks south of the park, but who's counting? (It's replacing a long-lived surface parking lot next to the Blackstone, now Merle Reskin, Theater.)

The Wit's architect is Jackie Koo of Koo and Associates, an alumnus of Destefano + Partners, where Koo worked on a number of 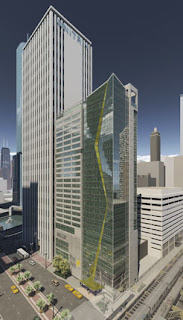 hotel and residential projects. Koo majored in philosophy from the U of C, and has a masters in architecture from UIC. (Thanks to the sleuths among the skyscraper enthusiasts on Skyscraper City for the info. )

Any architect who has the good sense to set up shop in John Wellborn Root's extraordinary Monadnock Building is off to a good start. The rendering of Koo's design for the Wit shows a rather mundane, servicey looking element to the north, abutting the Unitrin Building, and a thin spine, with a square notch at the top, on Lake Street to the east. (On one early depiction, these were colored black, but now appear a neutral concrete.) Between them is a shimmering glass curtain wall block spreading out from the corner, with a gold or yellow trimmed cutaway that incises a shallow triangular setback in the building's upper half. The trim doubles back on a diagonal that stretches down to a large central canopy over the State Street entrance.

Last year, ECD had talked about having trademarked Fritzel's, 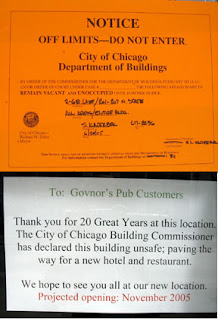 the name of the legendary Chicago restaurant that anchored the site for decades, declaring it was "planning to bring the iconic Chicago supper club back to State and Lake." I couldn't find any reference to this on the company's current web site, but I still wouldn't expect the Govnor's Pub/KFC/Taco Bell/Dunkin Donuts combine that occupied the former Fritzel's building until June of '05, when the city helpfully declared the whole thing unfit for habitation, to be coming back to serve the Wit's somewhat more upscale clientele.

From now on, whenever anyone anywhere discusses a new project in Chicago, I would love for the description "26-floor building" to be reviewed as "5/21-floor building" to reflect the projects true aspiration: a 21-floor building on top of a 5 level parking garage. It's a misnomer to describe 95% of new Chicago architecture without figuring just how much god-awful parking the developer is piling above street level.

In any event, yes I am joking. But anything is better than another 12-floor Freidman Properties parking garage, and this location was a hobo & pidgeon eyesore for years. Only thing is: why on Earth would anyone want to put a boutique hotel right next to such a noisy site: the rumbling Red line below combined with the cacophony of the Lake Street El trains and State Street traffic?

the building is actually 26 stories of habitable space. There are no garages in the building.

The hotel will contain 298 hotel rooms, two full service restuarants, and a roof-top lounge that has both enclosed and open-air sections.

Those lowest level hotel room is 85 feet above ground.

The glass wall and structure is acustically engineered, together with other acustical treatments inside the hotel room to reduce sound levels such that most guests will never hear the train that passes along Lake Street.

The Wit opened yesterday (May 27, 2009). I'm happy to come across this blog post via a Google search for: The Wit building.