Modern and Monument, sliding past each other on King Drive

Chicago's historic Martin Luther King, Jr. Drive, as the former Grand Boulevard was renamed in 1980, is still dominated by elegant mansions in various historical styles built for the city's elite in the 1890's, when, in the words of Harold M. Mayer and Richard C. Wade's Chicago: Growth of a Metropolis:

"One of the most colorful social rituals of the time was the Sunday promenade down Grand Boulevard in the summer, where thousands of expensive carriages majestically bore the wealthy to the race track south of Washington Park."

(Was Chicago's elite a cabal of godless heathen, the builders of the city spending the Lord's day in ostentatious parades and gambling on the ponies?)

Despite some rough times in decades past, most of the mansions and greystones of King 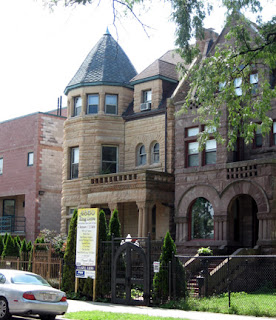 Drive survive today, and gentrification is seeing more and more of the old grand dames restored for today's economic elite, with new construction, attempting to blend in with varying degrees of success, taking over many of the longstanding gaps of vacant lots. The "contemporary" concrete block and brick mansion to the left in this photo can be yours for 740K, while the thoroughly renovated Queen Anne original to the right, 4000 square feet, six bedrooms, three-and-a-half baths, can be yours for $699,900, which in downtown Chicago would be lucky to get you a cramped three bedroom in one of those new "luxury" condo towers where a fancy name seeks to mask a basic poverty of design. 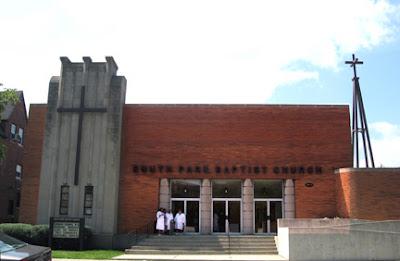 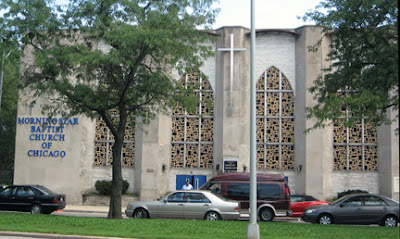 Pride of modernist place, however, has to go to the Illinois/Service Federal Savings headquarters, just north of 47th, home to one of the last black-owned financial institutions in Illinois. 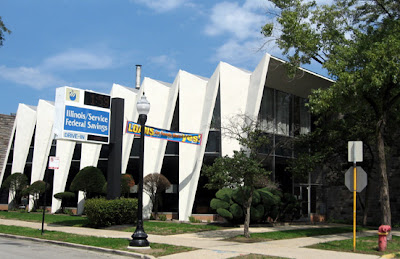 It's a bright, high-contrast accordion of white concrete and dark triangular windows, bookended between tall, Prairie-style stone walls. Lee Bey calls it, "One of a few examples of Googie/populuxe/midcentury modernism on the city's South Side." Dating from 1962, it's a lovely counterpoint to all the heavy masonry that surrounds it. 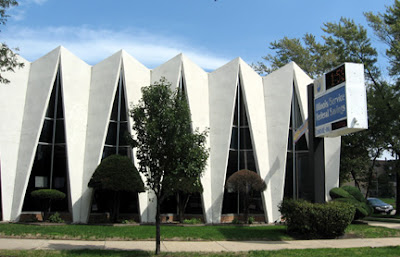 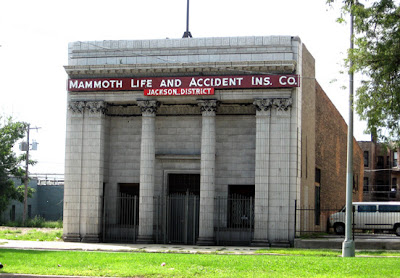 My bet it was originally a bank, probably failing in the Great Depression. Its compact, bulldog form is like a Temple of Dendur, gussied up in Corinthian attire. Today, small, thin reeds of broken neon hang from the letters of the large crimson sign, as the building sits silent as tomb, wondering whether what it's awaiting will turn out to be a prince or a bulldozer.