Despite Blogger.com's best efforts, including those annoying word verification fields (which I never seem able to get right at first attempt), spam still occasionally makes it through to the comments area of my blog - unrelated plugs for resorts, remedies for mold and, increasingly, invitations to websites written in Chinese that

seem to be pitching vendors for various types of equipment. A recent Chinese language spam lists the word "reactor" over a dozen times - I can only hope they don't mean nuclear. As I soon as I find any of these spam listings, I delete them.

Which was just what I about to do with a supposed spam for a Forgotten Chicago website. Wrong. Forgotten Chicago turns out to be a highly personal and almost addictive repository of pieces on lesser known aspects of the city, informative and with great photographs and illustrations.

Want an explanation of Chicago's pre-1909 street numbering system? Here it is. Did you know St. Ignatius High School has a great outdoor collection of artifacts from lost Chicago architecture, including bas reliefs from the Old Chicago Stadium, and a piece of the cornice from Louis Sullivan's Stock exchange building? They do, and you can see pictures of them on the Forgotten Chicago website here. 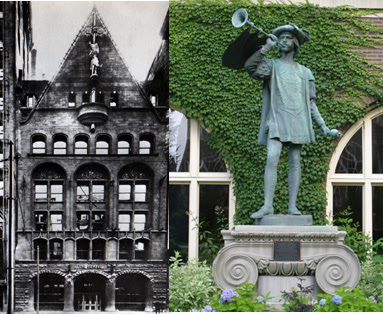 For years, I was wondering what happened to Johannes Gelert's statue of a herald, which had originally adorned Burnham and Root's 1891 Chicago Herald building on Washington. Long after that building was lost, the sculpture had stood, seemingly forever, on the roof of a forlorn one story parking garage that had taken over the site. When that garage was torn down, the sculpture had briefly reappeared in a niche on the far larger multi-story facility that replaced 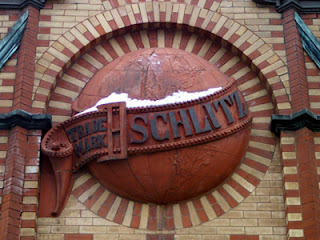 it. And then, one day, it was gone. Now I know it's found safe harbour at St. Ignatius.

Ever visit Schuba's on Belmont and wonder about those Schlitz globes on the facades? Well, they were part of a short-lived "tied house" era. Forgotten Chicago's web page on the subject not only explains what that was (a system where certain taverns were "tied" to sell products of one brewery exclusively), but provides a list of all the known surviving examples, many with photographs. 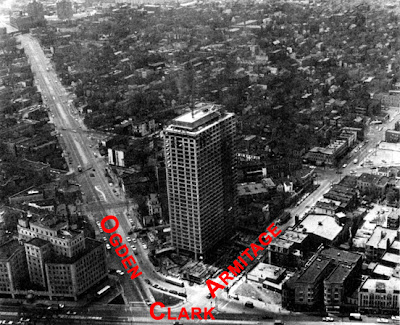 There also's a great story on Ogden Avenue, one of the diagonal streets that were an integral part of the 1909 Burnham Plan, that originally ran all the way to Clark Street - perhaps the only North Side diagonal that ran in a northeasterly, rather than the usual northwesterly, direction. North of North Avenue, it was demolished beginning in the 1960's in another urban renewal initiative that may ultimately prove to be rather short-sighted. You can sense its absent presence in the open "Ogden Mall" sitting outside Ranalli's Pizza on Lincoln, and in mess of streets around Menomonee and Hudson that Ogden's removal sliced into disconnected cul-de-sacs. And you can find the bas-reliefs rescued from the demolished Ogden viaduct at St. Ignatius.

Great stuff, and there's a lot more where that came from. Check out the Forgotten Chicago website here.

thanks for the link. i really enjoy your website. i only posted that comment because i could not find your email listed anywhere!

thanks again, and we'll give you a link if you want..

Great site! I really like what you are doing. Chicago has great Architecture.
I was wondering if you would like to join my Chicago Blogger Networking Group. We get together in Chicago or on the phone and give each other tips on blogging, how to..., networking, traffic exchange and much more.
Please contact me via email @
TipsforYourLife@yahoo.com
Keep up the good work!
www.TipsforYourLife.com
-John

Very cool site.
Thanks for pointing it out.

I never knew that about Ogden. I looked at the map just now and noticed there's actually one little snippet of Ogden that still exists east of Halsted. It's off Clybourn, by Cubs Care Park.

I was happy to discover that at least some fragments of the old barn were saved. I took the scrapping of that building pretty hard. I wonder why there was never any attempt to incorporate the salvaged reliefs into the lifeless facade of the new building?

Great stuff, I have a large parapet cornice lion from the old Corn Exchange Bank located at 122-136 LaSalle St, Corner of Adams sitting in my livingroom.
I recently bought it from a salvager who bought it back from a collector who died. The bank was demolished in the 80's

I'be been able to find a couple of old post cards but not much else.
Seems they built a new apaprtment building on the site.

Here's a photo of the lion and scans of the old post card halfway down this page;

Well the url didn't go all the way, so here's the actual images;