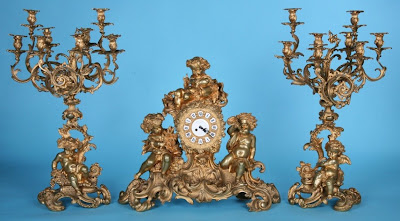 Via the indefatigable Joan Pomaranc comes word that an antique bronze clock and matching candelabra owned by the late theater historian Joseph DuciBella will be put up for auction on Sunday, November 25th by Elgin's Bunte Auction. DuciBella, who died this past June, had rescued the ensemble from the Magnolia Street side of the lobby of the Uptown Theater, the grand, 1926 4000-seat Chicago movie palace that has been shuttered since 1981. (Chicago Inside is again reporting that no less than two national promoters - Jam Productions and Live Nation - are interested in rescuing the severely decayed landmark from its long slumber.)

Bunte Auction's backstory relates that DuciBella acquired the clock after it had been sold to the Hoosier Theater in Whiting, Indiana, and that "the three pieces were black as coal. Think of the accumulated tarnish and dirt of the theatre and the thousands of curious fingers that had touched it!"

Somehow the almost deliriously ornate clock seems a perfect distillation of the brief, populist era of the movie palace, when the high Baroque and the palaces of the super-rich were reimagined as a royal backdrop for the working class audiences who filled the massive theater, day after day.

The Sunday, November 25th auction will be at Bunte Auction, 755 Church Road in Elgin.

POSTSCRIPT: Please click on the comments to this post to read the Uptown Advisor's response to critical comments about this sale.

I don't understand how the late Mr. Ducibella "rescued" the clock and candelabras from the theater.

Regardless of how Mr. Ducibella obtained them, it is clear that the right thing is for these items to be returned to their original place in a restored Uptown Theater.

Remember also that a lot money has been wasted over the years in the efforts to reopen the Uptown Theater in some form. Here we have an obvious action that will NOT be a waste of money. The current Uptown Theater group can purchase these items, put them in storage, and ensure that they are brought back to the Uptown Theater when it is reborn.

Finally, having known Mr. Ducibella as an acquaintance, I think that he would have wanted these items to return eventually to their original home.

It would not appear that Mr. Ducibella in any way obtained the items illegitimately. Remember that Richard Nickel also rescued numerous artifacts from Adler & Sullivan buildings that otherwise would be simply have been trashed and lost.

Here's the full text of the emailed story:

Friends of the late Joseph R. DuciBella, the noted designer and
theatre historian from Chicago who died earlier this year, have related that his antique bronze clock and candelabra pair from the UPTOWN THEATRE, Chicago, will be auctioned from his estate on Sunday, Nov. 25, by Bunte Auction in Elgin, Illinois.

The large, heavy and now highly valuable ensemble decorated the UPTOWN's interior atop a large chunk of antique furniture in the Magnolia lobby near the first-floor ladies lounge, which has a French Renaissance theme.

Joe loved to tell the story of how different managers allowed him to take things of historical interest home during his tenure there and how they were amused that anyone would want them. (He worked for Balaban & Katz during his youth.) However, a reliable source says that Joe obtained the clock set after it had been bought from the theatre and moved along with UPTOWN WurliTzer theatre organ to the HOOSIER THEATRE, in Whiting, Ind.

The clock, Joe said, was missing pieces and did not work when he got it --nevermind that the three pieces were black as coal. Think of the accumulated tarnish and dirt of the theatre and the thousands of curious fingers that had touched it!

Joe also recalled how his mother shrieked when she walked into the bathroom and found all of the blackened putti that adorn the pieces soaking in the clean, white bathtub. Of course Joe cleaned the clock meticulously and had it restored to working order.

The clock set was one of the highlights of the dining room in his National Register home in Wicker Park on Caton Street that also included Mikado-styled light fixtures that were said to be from the Marshall Field Mansion. Joe was certainly proud of the clock and included it in all tours of his home and in the typewritten tour guide!

It would be a wonderful gesture if a deep-pocketed admirer of Chicago history and Joe's collection would find a way to keep it in Chicago and/or on display in some appropriate setting.

I recall listening to an 1990s taped interview of Joe at his
home wherein the clock's chime could be heard. It is both beautiful and haunting. I'm not exaggerating when I say that I felt it contained something of the soul of the building. The sound on the tape chilled and confused me until I figured out what it was.

The UPTOWN clock's ethereal chime is a gentle but articulate voice from an age that has long since passed, leaving few traces or memories.

After that extra information, it seems even more important that these terrific artifacts are purchased by the current Uptown Theater group.

Postscript November 18th, 2007.
a response from the Uptown Advisor:

UPTOWN ADVISER received many responses to this most recent posting. Most were very negative in their tone -- telling us what we should do about things over which we have no control.

I feel it would be helpful for us to all know that the dispostion of Joe's estate is happening the way Joe -- himself -- planned, under the direction of a friend, caretaker and trustee, with many proceeds going to charity, including Cathedral Counseling Center in Chicago,
http://www.cathedralcounseling.org/about/overview.html

If you have fond memories of Joe and want to make a lasting tribute, then please talk to Cathedral Counseling or Theatre Historical Society of America, of which he was a founding member (www.historictheatres.org).

Joe spent a lifetime in the worlds of theatre, cinema and design, collecting, buying, finding, selling and sometimes giving away things of great historical interest and artistic value. The UPTOWN clock set is certainly a very nice piece and it will rate a winning bid in the tens of thousands of dollars.

Wouldn't each one of like to hear that clock chiming under our Christmas tree on the morning of Dec. 25? The only problem with that scenario is a. the price, and b. it is too darned big to fit under most trees!

If pricey antique clocks are your thing and you have money to burn,
then please go for it via Bunte Auction, Elgin, llinois, www.bunteauction.com.

If not, then please know that Joe enjoyed it while he was here and that the UPTOWN -- itself -- needs an interested owner, a lot of vital work and a use before it needs any kind of antique clock again.

Rare is the historic venue these days with any kind of antiques or art left to decorate their interior spaces and niches...

That is to say that this auction item is beyond the means of most of
us FRIENDS OF THE UPTOWN, and that we are more concerned about the cake and the pan it is in rather than any flavor of icing.

I hope that helps clarify this earlier notice of an opportunity to
bid on an collect a pricey piece of UPTOWN history from the estate of
our dearly departed friend, critic and mentor, Joe DuciBella.

I shared the advertisement because such artifacts are very rare. Joe either owned or knew the whereabouts of all acknowledged survivors of the art horde that was displayed for the amusement of UPTOWN patrons upon its opening in 1925. He often referred to the official inventory and was amused by the extravagance of art and objects that were commonplace at the UPTOWN.

First, who are you? Why do you not sign the name of a real person?

Second, please let us know what happened to the gift that Albert Goodman made a few years ago. I believe it was for $100,000. Who controlled that money? Is any left?

These are reasonable questions. And while your at, knock off the sanctimonious tone. The above questions are quite reasonable.

1. "If pricey antique clocks are your thing and you have money to burn,then please go for it via Bunte Auction, Elgin, llinois, www.bunteauction.com." Translated: Put up or shut up. The proceeds are going to charity, so, it'll feel good to spend that $35K.

2. $1 million (from the Edith Maire Appleton Foundation and more was wasted by the alleged nonprofit "Uptown Theatre and Center for the Arts," which spent $ on everything but the building and in reality never had any relationship to it and never had any impact on it. Friends of the Uptown are volunteers that work mostly out of pocket and from in-kind donations. The volunteers also write Uptown Adviser and do other promotional activites. Please, next time, do some reading/homework before you start slinging.

3. If you don't like the tone, don't read Uptown Adviser. It's a longtime publication for people who "get it." If you don't get it, go read Gapers Block, Boondocks or Savage Love or something more to your taste.

Excuse me, but I am due back on planet Earth.

Could I make a suggestion that we all settle down on this?

I posted the item because I thought it was interesting. I didn't really think it would tick so many people off.

Joe Ducibella rescued the clock when it would probably otherwise just be lost. There was nothing underhanded about it. He restored the clock. He enjoyed the clock. He died and his estate is being auctioned off. It would be lovely if someone stepped forward and purchased it to hold for the Uptown's restoration, but it is probably going to be hugely expensive, and it's understandable if people decide to use their money elsewhere.

Thanks, as always, for your comments, but can we all now agree - There are no bad guys here.

Thanks, Lynn. It just gets a little old having outside observers weighing in such an accusatory way. To quote Joe, quoting his aunt: Honey, you have no idea.

Was that his Aunt Rose?

I love that Antique clocks. Do you have more pictures?