I was reading Sneed's Sunday column in the Chicago Sun-Times (hey - it could happen) when I came across the following item:

Legendary novelist Norman Mailer may have left behind a mountain of prose, but he also left behind a ton of Legos: a 15,000 piece "City of the Future."

The image of such a construction popping up, Rosebud-like, in a warehouse of the late author's belongings sent me back to my copy of Mailer's 1966 Cannibals and Christians, in which the following photograph, by Simeon C. Marshall, forms the frontispiece. 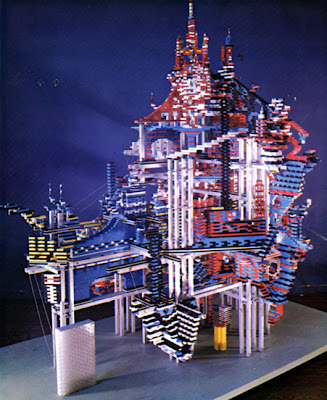 What's strange about the above image is that Mailer hated modern architecture ("collective sightlessness for the species") and seemed to have thought the work of Mies, LeCorbusier and Frank Lloyd Wright interchangeable and equally dreadful.

But in an essay in the book originally written in 1964 for the Architectural Forum, Mailer riffed on a contemporary projection that by 2016, the U.S. would have 400,000,000 inhabitants, and be 4/5 urban. Like most radicals, he was in many aspects supremely conservative, even reactionary. He could see sprawl coming, and he didn't like it:

If we are to spare the countryside, if we are to protect the style of the small town and of the exclusive suburb, keep the organic center of the metropolis and the old neighborhoods, maintain those few remaining streets where the tradition of the nineteenth century and the muse of eighteenth century still linger on the mood in the summer cool of any evening, if we are to avoid a megalopolis five hundred miles long, a city without shape or exit, a nightmare of ranch houses, highways, suburbs and industrial sludge . . . then there is only one solution: the cities must climb, they must not spread, they must build up, not by increments, but by leaps, up and up, up to the heavens.

And so Mailer, working with Eldred Mowery, Jr., created an expression of his vision in a 7 foot high model constructed out of 20,000 Legos, a "vertical city of the future more than a half mile high, near to three-quarters of a mile in length, with 15,000 apartments for 50,000 people." Far from offering up a classicist's idyll, it out-Jetsons anything Wright or Corbu ever envisioned. Mailer wondered whether "a large fraction of the population would find it reasonable to live one hundred or two hundred stories in the air." Garrett Kelleher is probably pondering that same question this very moment.

I suppose if Norman had built that playful structure from something other than LEGOS... the author here might have a point.