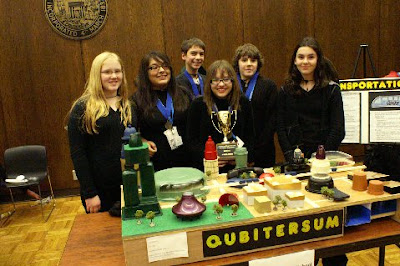 Qubitersum - that's the name of entry that won first prize in the 2008 Chicago Regional Future City competition for a team of 8th grade students from Franklin Middle School in Wheaton. It's their concept for a city in the Australian desert where all the of the buildings have a veneer of spray-on solar cells that power the city and use nanoscale spectrometers to tap power stored in fuel cells once the sun goes down. According to this story on Medill Reports, another ready resource in the desert, sand, is used to create the glass to build the city, while scare water is produced by a sophisticated recycling and desalinization system. On February 19th, Karen Suarez, Jenny Birman and Cole Manschot, along with their teacher Liz Simpson and engineer mentor Dave Manschot, will travel to Washington, D.C. on February 20th to compete against 36 other entries from around the country for the Future City National Finals, held as part of National Engineers Week.

Competitors use SimCity 3000 software to design their metropolis, which is then used as a blueprint for constructing a physical model out of recycled materials. The winners of the national competition will win a trip to U.S. Space Camp.