Two new additions to our February calendar of Architecture Events will be duking it out next Wednesday evening February 20th. 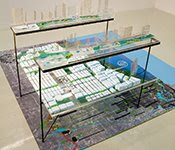 Archeworks will be appearing at a Chicago Architectural Club event, 6:30 P.M., February 20th, at the I-Space Gallery on the second floor of 230 West Superior. Their entry, Growing Water, was the the first place winner of the History Channel's 2007 national City of the Future competition. Future events will include Krueck and Sexton's Mark Sexton and Tom Jacobs talking about their new Spertus Museum, on March 25th, Blair Kamin on April 29th, and Stanley Tigerman talking on "Chicago Activism" on May 20th.

Kulapat Yantrasast, wHY Architecture - IIT will kick off its own winter/spring series at 6:00 P.M., February 20th in Crown Hall, with a lecture by 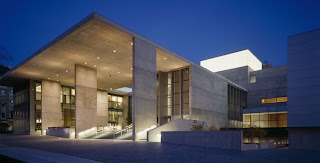 the Executive Creative Director of wHy Architecture, of Culver City, architects of the recently opened Grand Rapids Art Museum, and redesign of the Prints and Drawings and several other galleries at the Art Institute of Chicago being carried out in conjunction with the construction of the museum's new Modern Wing. Future lectures in this series will include Detleff Mertins on March 12th, SOM's Ross Wimer April 2nd, Alex Krieger of Harvard GSD April 7th, and Rocio Romero on April 14th.

And speaking of duking it out, IIT's Mies van der Rohe Society will begin selling tickets later this month for its annual Mies Birthday (122nd) Bash on March 29th, which this year will feature the Duke Ellington Orchestra, recalling an earlier landmark event when that orchestra, Ellington himself at the helm, was the featured act at a spring dance that saw Crown Hall turned into a nightclub, the huge - and then much thinner - glass panes bowing in and out to the swing of the music, and Mies watching contentedly sitting in a Barcelona chair, puffing his cigar.

You can check out the entire February calendar here. (I've got to start working on March.)

Great work in putting this up together! In other news, Kulapat Yantrasast recently designed a pavilion called Eros Senses. Check it out at: http://revolutionprecrafted.com/project/the-eros-senses-pavilion-by-kulapat-yantrasast/