Why Gunner's Mates Deserves to Live, plus 600 North Fairbanks Bonus

Slogging through Blair Kamin's 1,200 words on a nullity with a glandular problem like the Columbian at Michigan and Roosevelt, you begin to think being architecture critic for a big paper like the Chicago Tribune has to be the dullest job in the world, but why should he pass the contagion on to the rest of us? (The real meat of the story, about whether city interference or architect's timidity was most to blame for the building's mediocrity, took a back seat to an oh-so-serious analysis of a design best suited for irreverent guffaws.)

Otherwise, however, Kamin's been on something of a roll, most recently this past Sunday, with a great article on the battle to save Building 521 at Great Lakes 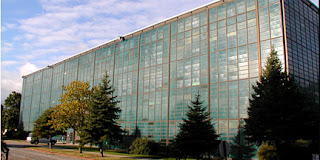 Naval Training Station, otherwise known as the Gunner's Mate School, a beautiful box of blue-green glass that was the first major design of Skidmore, Owings and Merrill's Bruce Graham, who would go on to design the Hancock Center and Sears Tower with engineer Fazlur Khan. Kamin makes a great case for the structure, for which Landmarks Illinois is spearheading an effort to save it from the Navy's full-court press for demolition. A public hearing was held on the building last week, which, according to a correspondent, was called by the Navy largely to run through all the reasons why resistance is futile.

The battle is far from over, however, and one advantage of the web version of Kamin's piece is that it includes a gallery of sharp photographs that makes a great case for preservation just by taking you around and inside the Gunner's Mate building, and also through Jarvis Hunt's classy early 20th-century administration building. (The photograph here is from Landmarks Illinois, Skidmore, Owings and Merrill.)

Kamin has also recently written on the importance of saving the Daily News Building and Plaza, threatened by developer Sam Zell, and a piece on one of Chicago's best new structures, Helmut Jahn's 600 North Fairbanks. I hope to also write on this project, but for now, here's a couple of pictures. Thrash it out among yourselves. 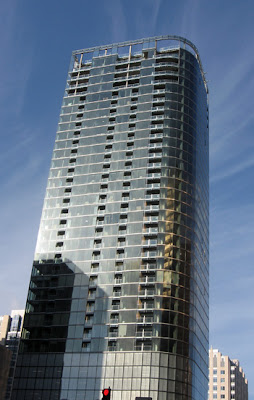 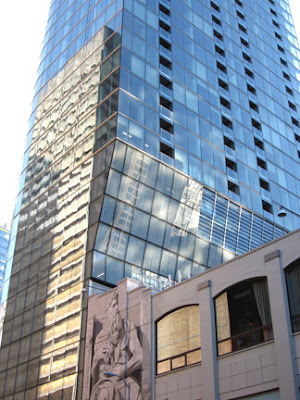 Mansard roofs, peaked roofs, and other post-modern touches are fine with me. We have to many flat-topped new buildings in this city. I like the sculptural modernist buildings but NOT the boxes.