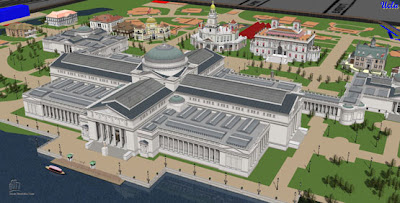 The Museum of Science Industry is again showing Lisa Snyder's massively ambitious virtual tour of Chicago's 1893 White City. Snyder began the project as a way to showcase UCLA's urban simulation team's software technology. She previously showed the project in 2005, when I saw it. I was blown away with how, even at that early stage, it was beginning to provide a very detailed and visceral view of what the square-mile exhibition was like. According to great story by William Muller in Thursday's Chicago Tribune, Snyder has added 10 state pavilions and the fair's giant Ferris Wheel as part of filling out a complete portrait of the project. I think Snyder should get in touch for the Sim City people about supporting the project by licensing some of her virtual images of the fair's structures for their next edition..

Chicago historian extraordinare Tim Samuelson told the Trib that although he's been collecting books, photos and maps on the fair since he was a child, he now realizes "I never had a sense of what the fair was really like until I saw Lisa's presentation." He was especially impressed in finding how renegade architect Louis Sullivan rebelled against the whites-only mandate not only with the famous "Golden Door" entrance he designed for his Transportation Building, but by painting the whole thing a bright red.

Over the weekend, the presentation will be given 19 times in the MSI's auditorium. You have four more chances to see it on Sunday, five on Monday, with only 220 seats available for each showing. Snyder and Samuelson appear to be presenting every one if them. Didn't that kind of grueling five-a-day schedule get outlawed after vaudeville died?

Because of the complexity of the simulation, it could well be a while before it's shown here again. Museum admission gets you in, first-come, first-served. See it if you can. Info here.

If you want to go get there early, before they open. I tried getting in today (Sunday) after seeing this entry. I get there at 1130 (1/2 hour after opening) and there were no more openings. I might try to go tomorrow only if I can get there well before they open.

Why can't they make this a regular exhibit, given the significance of this presentation to the MSI site? I hope they reconsider.