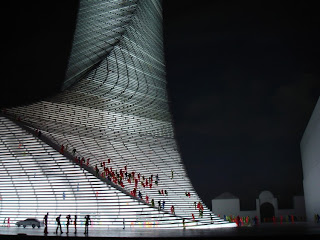 But then, nothing's every really free, is it?

That's probably what you'll be thinking as you're filling out your grant applications. The Graham Foundation dropped us a sedate note to remind you that February 25, 2008 is the application deadline for Production and Presentation Grants to organizations. The form is available online the Graham Foundation web site and must be submitted electronically. It's the first stage of a two-stage review process. And March 15th is the application deadline for this year's Carter Manny Award, also available on-line, and must be submitted - well, you know the drill by now. If you're a student , don't even think about applying unless you've been "nominated by [your] department." This is, after all, Chicago: we don't want nobody that nobody sent. The Carter Manny award supports academic research "concerned with architecture and with other arts that are immediately contributive to architecture. "

I also have to mention that you absolutely have to see the Graham's crackerjack exhibition, the BIG CPH Experiment, which runs only through March 1st. I hope to write about it more in a next couple days, but for now, let me just say that it's a wonderful amalgam of critical and imaginative - and often very witty - thinking about redefining the often drab architecture of the Danish welfare state. Several models are quite beautiful, and the massive LEGO Tower is a fresh reconsideration of modernism that is spectacular and charming all at once. Don't expect a blockbuster. It has only seven parts. But by all means don't miss this show.