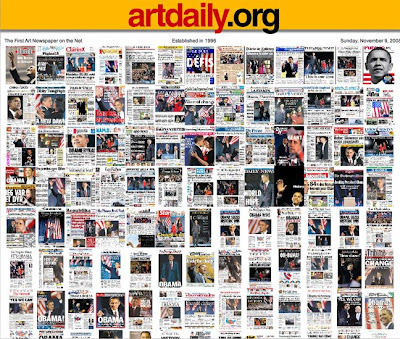 O beautiful age of illusion and utopias!
We believe, we hope, and everything seems possible!
Marcello, Puccini's La Boheme

Apologies to my reader Stephen who commented, regarding my own modest acknowledgement of Barack Obama's stunning victory, " it would've been nice if it could've been a respite from political oriented material," but in light of the such a momentous event, blogs as disparate as Opera Chic, Andrew Patner's The View from Here, and Lee Bey's The Urban Observer all felt compelled to add their own take on the event.

For die-hard Republicans, it may have been only politics, but for the rest of us, it was like the scene in Beethoven's Fidelio where the prisoners are finally liberated out of their dungeon into the bright sunlight and clean air. After eight dark years in which our public treasuries were plundered, our reputation trashed, our friends repulsed and our Constitution defiled, last Tuesday's election finally gave us at a least a moment to hope that our better days may still be ahead of us.
When I titled my own modest post Now Comes the Hard Part it was in full recognition of the fact that translating 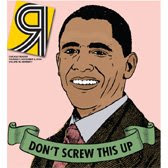 that hope into a new, better reality will be a Herculean task. Last week the Chicago Reader took a lot of flak from Afro-Americans and others offended by its cover portrait of Obama with a bottom banner reading "Don't Screw This Up." (The alternative cover, which would have run if John McCain had won, was even funnier: "Please Don't Die.") The misconception is that the cover was degrading Obama's ability, which couldn't be farther from the truth. It's a recognition of the enormous and perilous task, greater than that facing any incoming U.S. leader since FDR took office in the depth of the Great Depression, facing our new President.

But like Rick and Ilsa's Paris, we'll always have last Tuesday, and the glow of that golden moment when the clouds lifted and everything seemed possible. And I've seen no more eloquent evocation of that moment than that just put up on the website of artdaily.org, the invaluable newsletter that bills itself as "The First Art Newspaper on the Net." Editor Ignacio Villarreal chose to represent the occasion with an extraordinary mosaic of 208 newspaper front pages, from across America, and all around the world. When you place your cursor on one the images, it expands to a larger size for better viewing. Writes Villarreal:

There are 208 newspaper front pages from around the world that we have gathered here so that our visitors can see the beauty in the formats. What talent of those who with only one word, with just the name or a simple phrase, shape their respective newspapers with this story that occupied the front page of many dailies throughout the world.

An unstated parallel story of the mosaic is this may be one of the last times such an epochal event will be able to be expressed through the front pages of daily newspapers, which, after several centuries, are in often precipitous decline, reportedly on their way to history's dustbin. (Chicago's two storied dailies, the Chicago Sun-Times and Chicago Tribune, are especially endangered, poised at the precipice of an annihilating fall, greased, respectively, by the lootings of a predatory, now imprisoned, press lord and a high stakes financier's $8 billion noose of debt.)

But for one day, at least, we put that aside. Thanks to artdaily.org, we have their exhilarating portrait both of the audacity of hope, and a reminder of the delight and democracy that was the daily newspaper.
(Click on time for permalink) 4:28 PM