Sunday's New York Times offers up architecture critic Nicholai Ouroussoff's overview of the architecture of Buffalo, the one-time Empire City of Lake Erie that, after the opening of the St. Lawrence Seaway in 1957 reduced it's importance as a port, began an economic free fall that has seen it lose half of its population. At it's prime, however, Buffalo was the eighth largest city in America, and called upon the best architects of the time - Daniel Burnham, Louis Sullivan, H.H. Richardson and Frank Lloyd Wright, among others - to design its iconic buildings. Ouroussoff begins his article commenting:

One of the most cynical clichés in architecture is that poverty is good for preservation. The poor don’t bulldoze historic neighborhoods to make way for fancy new high-rises.

But, of course, historic architecture has two great enemies. One is prosperity, where a historic building is the obstacle to recycling the site to higher density and greater economic gain. The second, however, is poverty, where historic buildings are considered expendable because they no longer seem to possess any residual economic potential. 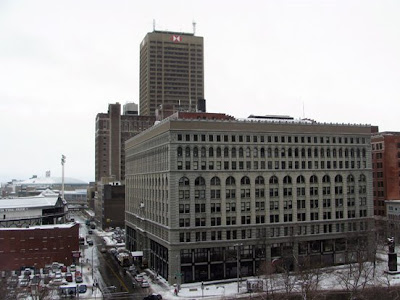 Among the structures mentioned by Ouroussoff is Burnham's 1896, $3,5000,000 Ellicott Square Building. At ten stories high and half a million square feet, it was the largest office building in the world at the time of its opening. Like Union Station in Chicago, it was designed to support an additional 10 floors, but, also like Union station, the addition was never built. Ellicott Square is the product of Burnham's chief designer Charles Atwood, who was said to be able, at a moment's notice, to create a building derived from any historical style you might fancy. Here, he seems to be channeling Adler & Sullivan's Auditorium Building, sans tower or theater, with a base by way of William LeBaron Jenney and a pasted-on grand entrance that's a Rapp and Rapp-like reimagining of Renaissance Italy. 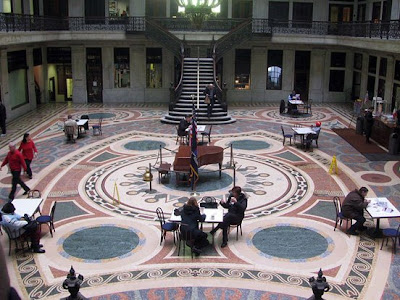 The glory of Ellicott Square is its light-filled central court (the photos here are via TonyTheTiger at Wikipedia), with a brilliant mosaic floor made up of over 23,000,000 tiles.

The web version of Ouroussoff's piece beats out the print with an expanded slide show of photos. You can see more of Ellicott Square, including a sequence of construction photographs, on the Buffalo as an Architectural Museum website, a wonderful compendium of information and images.

Closer to home, the Trib's Blair Kamin takes an early tour of Renzo Piano's Modern Wing of the Art Institute of Chicago, considering the tensions that arise between museum architecture and the art it was designed to display. 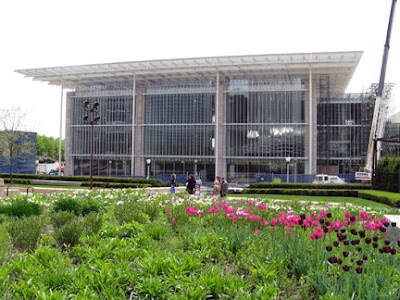 Modern Wing galleries with northern exposures have to compete with the spectacular tableau, flooding through Piano's wall-to-wall, floor-to-ceiling windows, of Millennium Park, centered by the billowing metallic scallops of Frank Gehry's Pritzker Pavilion backdropped by the east Randolph Street skyline. 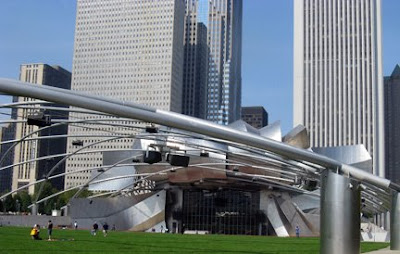 The Art Institute's solution? Put a wall in front of part of the window both to display art and break up the view. It will be interesting to see how the art, itself, will fare in galleries with such large windows. Kamin, who has a Pulitzer, gets to contemplate it now, while I, a mere blogger, will wait for the public opening next Spring.

As with Ourousoff, Kamin's piece is actually better in the web version, where it is accompanied by a short video where several Art Institute curators show off the wonders of their new baby. 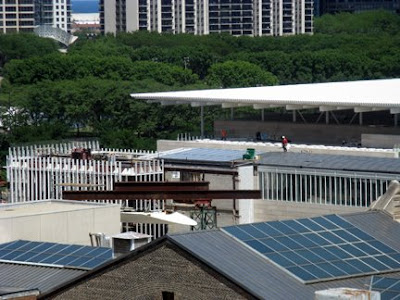 Thanks for the link to the NY Times article. I quoted you both. The picture slide show of Buffalo was great. This is a great source for events and articles I would not otherwise have come across. Thanks.