Truss on a Stick 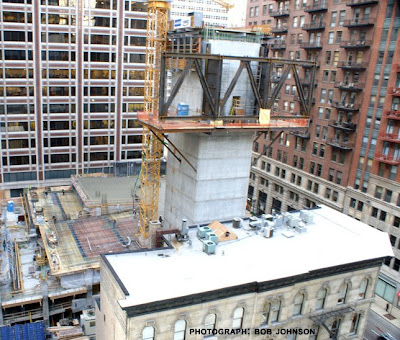 Our indefatigable correspondent - and photographer - Bob Johnson - directed our attention to what's going on at the 215 West Washington, where some engineering gymnastics are going on with the mounting of the huge truss, pictured here, high up on the structure's central concrete core. 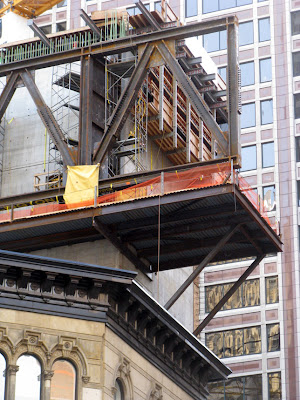 It was just this past May that Mayor Daley helped break ground for the Jupiter Realty project, designed by Solomon Cordwell Buenz. With an estimated cost of $157,000,000 - $16,000,000 in land costs, alone - Medill's Brittany McHenry reports that it will be the first new rental tower in the Loop in 15 years, leading the mayor to enthuse, "This project will not only stand in the history of Chicago, but I believe in this country and the world."

According to Chicago Shawn on Skyscraper City, the design continues to evolve, and the cantilever truss now seen to the east of the core may remain exposed. 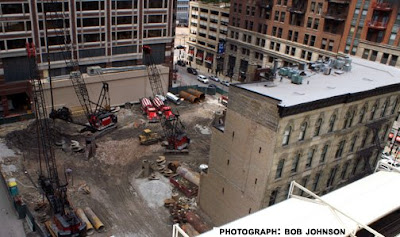 The site wraps around - and dwarfs - the landmark 1873 Washington Block, itself at the time of its construction one of the city's tallest and most elegant buildings. Until a 2005 demolition, 215 West Washington was the address of Holabird and Roches's 1920's Hotel LaSalle Garage, among Chicago's earliest parking garages, concealed behind a terra cotta facade that gave the appearance of being that of a contemporary office building. 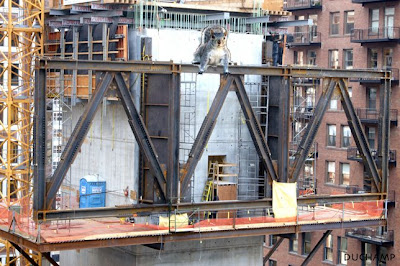 The new 215 W. Washington doubles the LaSalle's six floors of parking. The 50 story building will offer up nearly 400 rental units and is slated to come on line spring of 2010, by which time it is hoped the potential renters you see being kept under wraps below will again have money. 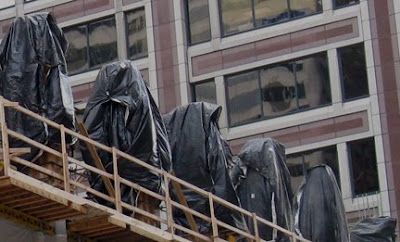 I work at 225 W. Washington, right next to the site, and it's been fascinating to watch from above as this building slowly rises from the ground. Not to mention unnerving, seeing how much the crane sways back and forth under a heavy load. I was relieved when I recently relocated to a cubicle on the opposite side of our building.

I'm concerned about the rodent problems in this place...it seems destined to have trouble with all manners of furry creatures... I just can't shake the feeling.

I'm more worried about the SIZE of the rodents here. Geez. I've only seen things that big on the blue line...

Gawd, just what this city doesn't need: another apartment building sporting a $450 application/admin fee, $1600 convertibles, $2200 1-bedrooms and $100 utility surcharges. I'm all for new downtown rental properties, but who raised market rates in Chicago that approach NY or SF rental rates?

Truss displays are used by brands that want to make an impact at their trade show or event. Our truss display booths are designed to clearly display your products and services. Think you can afford a truss display? Think again. Our exhibit truss is designed to pack a punch and help you standout at the show. With our competitive prices and excellent quality you're assured to be getting a great display at the right price http://www.exhibeportable.com/pop-up-displays.asp